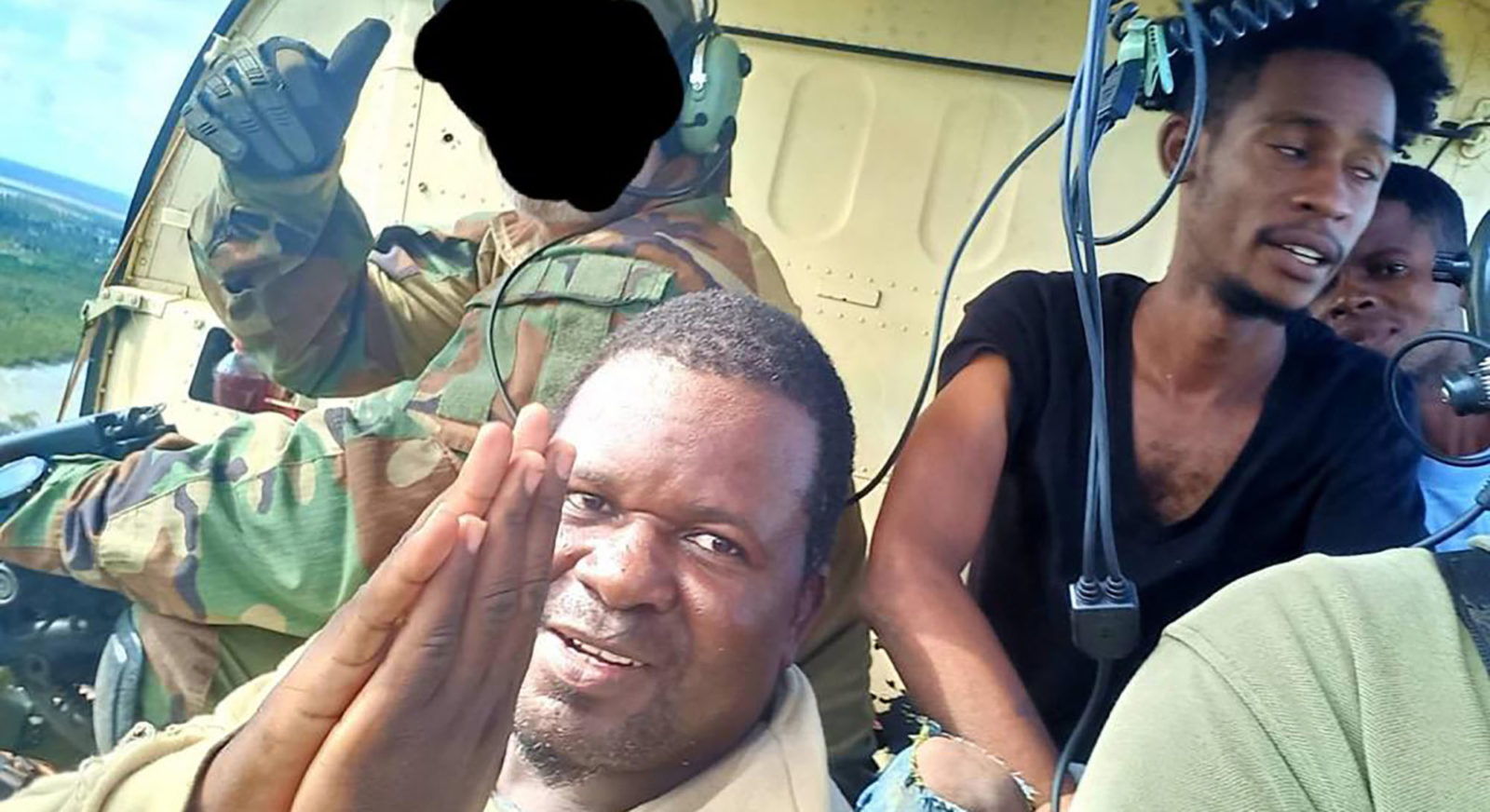 Mozambicans rescued by a DAG helicopter in Palma this week. The gunner’s face has been obscured for security reasons (Photo: DAG)

The South African private military company credited with saving many lives during a major attack by Islamic State-linked insurgents in the northern Mozambican town of Palma over the last week seems to be on its way out. The Dyck Advisory Group (DAG) was recently accused by Amnesty International of ‘indiscriminate shootings’ while pursuing insurgents.

Max Dyck, an executive of Dyck Advisory Group (DAG), told Daily Maverick Maputo was not renewing the contract. Another source said the DAG would fly its last sortie on Friday and then would be gone.

However, another security source said negotiations between the DAG and the Mozambique government were “still ongoing.”

The DAG’s six light helicopter gunships have kept insurgents at bay in many places and also picked up over 200 expatriates and locals and flown them to safety. They often seemed to be the only ones fighting the insurgents.

“There are still skirmishes going on in and around the town though pretty low level compared with the last few days,” Dyck told Daily Maverick on Tuesday. “Looks like the FADM [the Mozambican military] is starting to move into town.”

Dyck said the company’s pilots had rescued a “couple of hundred” people since the insurgents attacked the town on Wednesday. Several expatriate survivors, including South Africans, have said they owe their lives to the DAG. For much of the fighting, the company has been all that stood between expatriate contractors or locals and the insurgents, whose trademark modus operandi is death by beheading.

The government’s plan seemed to be to replace the DAG with larger Russian-made Mi17 and Mi24 helicopters piloted by Mozambicans and Ukrainians as well as Gazelle light helicopters – like the ones the DAG uses – supplied by the South African arms company Paramount and piloted by Mozambicans trained by Paramount at its flight school in Polokwane. But these other aircraft do not seem ready for combat. Three of the Russian helicopters were reported to have joined battle briefly on Thursday, but then to have retreated after one was hit by AK-47 fire from the ground.

They apparently did not fly again and some expatriates who survived the attack expressed anger that the much larger Russian helicopters would have been able to airlift significantly higher numbers of people to safety than the small DAG Gazelle helicopters. The Mozambican pilots who will fly the Gazelles have apparently not yet completed their training.

Despite the DAG’s performance, Dyck told Daily Maverick: “No, our contract will not be extended,” adding that the Mozambican government had given them no reason for its decision. “Of course, if we had been requested to stay, we would have.

“I do hope that they have a plan in place for when we depart.”

He thought a recent report by Amnesty International, which was critical of the DAG for its operations, could have been a factor in Maputo’s decision. The report accused the DAG of indiscriminately shooting or bombing civilians from the air while pursuing insurgents. Amnesty was much more critical of the insurgents for brutal tactics of beheading civilians and of government forces for deliberately killing civilians.

However, another security source told Daily Maverick that negotiations between the DAG and the Mozambican government were still “ongoing” on Tuesday night and that clarity was expected by Wednesday night.

This source said the DAG was hoping to extend its contract by three months initially, to give it time for further negotiations.

Meanwhile, on Tuesday the South African Air Force (SAAF) repatriated six nationals who had fled the insurgent attack and also brought home the body of South African Adrian Nel, who had been killed by insurgents on Friday.

An SAAF aircraft first flew to KwaZulu-Natal — where Nel had lived — and then to Gauteng, said Clayson Monyela, spokesperson for the Department of International Relations and Cooperation (Dirco).

He added that officials from the Department of Health had conducted Covid-19 tests on the passengers on their arrival in KwaZulu-Natal.  Monyela said South Africa’s High Commission in Maputo would continue to help any distressed South Africans affected by the violence.

Nel was killed on Friday afternoon when he, his father and his brother joined a convoy of 17 vehicles that tried to break out of the Amarula Lodge in Palma, which had been surrounded by insurgents.

The convoy, heading for the beach in the hope that they could be rescued by boats, ran into two insurgent ambushes, according to survivors. Only seven of the vehicles made it through the ambushes but seven people in those vehicles were shot dead and others were injured. It is not clear what exactly happened to the occupants of the ten vehicles which didn’t make it through the ambushes.

The passengers in the convoy were either expatriates — mostly contractors at the Afungi site, or locals who had fled to the Amarula Lodge for protection.

Some ambush survivors made it to the coast where they were picked up by boat while others fled into the bush. DAG helicopters began rescuing them on Saturday morning and dropping them off inside the Afungi compound. They were transferred by plane or by ship — including several volunteer vessels — to the port town of Pemba, 230km south.

On Monday, Dirco announced that it had so far accounted for 43 of the South Africans who had been in Palma during the attack. That included Nel, the only South African who died. But South Africa’s High Commissioner to Mozambique, Siphiwe Nyanda, told Daily Maverick they were still trying to account for a further 10 to 15 South Africans.

‘Tell Us if He’s Dead’: Abductions and Torture Rattle Uganda

‘Tell Us if He’s Dead’: Abductions and Torture Rattle Uganda

Bulk Carrier That Spilled Oil Off the Mauritian Coast Breaks Up