Uganda: Kidnapped by the state - Image may be subject to copyright

Share on FacebookWhatsAppTweetShare
Written by CHANGE OF GAURDS
Since time immemorial, Ugandans are renown for flocking to check lists displayed by government with regard to school admissions, government scholarships and displayed Voters Registers.  It used to be a sight of joy and jubilation for both students and their parents whenever their names would be found on the lists of admission to secondary schools, universities and other tertiary institutions of their choice.  That was also the case in the golden days before Museveni assumed power and made government scholarships process a secret preserve of only the few well connected.
Since the just concluded sham electoral process, Uganda’s military dictator went in rampage carrying out kidnappings and enforcing an evil scheme of enforced disappearances of citizens who subscribe to some sections of the political opposition.  The kidnaps are carried out by his heavily unidentified armed security goons using unmarked vans dubbed Drones.  The kidnapped are detained in unknown places where they undergo untold gruesome torture.  When the relatives of victims attempt to register their complaints of their missing loved ones, the Police simply refuses to talk.  Amidst public outcry, Museveni’s Minister of Security, Gen. Tumwine came out to defend the kidnappings;
“When you want to catch a thief, sometimes you behave like a thief.”
The Police and other concerned government agencies came out to vehemently deny holding the victims.  Amidst that confusion, on February 13, Museveni came out to acknowledge that his security machinery was behind the kidnappings of the victims whom he described as “Terrorists” before cosmetically ordering that their lists be made public;
“Their names should be made Public so that this talk of disappearances is answered.”
The vice continued unabated and the opposition NUP of Bobi Wine presented a list of 423 of its missing members whom it alleged had been kidnapped by Museveni’s security goons. Almost a month later, after Parliament pressurised the Executive, on March 4, the Minister of Internal Affairs, Gen. Jeje Odong tabled a list of 177 victims whose whereabouts remained unknown.  He said;
“I would like to inform the house and the general public that a copy of this list is at police headquarters with the office of the CPC. The public is encouraged to check with that office the whereabouts of their missing persons and to get permission to visit them. However, in doing so we should maintain SOPs and avoid overcrowding. This is what I have so far, I will go back and check our systems to know where to persons are kept. I will look at the lists members have presented here and establish the whereabouts of these people.  I cannot stand here and say there will be no more arrests.  Arrests will continue, as long as there is reason and it is conducted reasonably.”
Despite demanding that the said victims be produced before courts of law, the aggrieved public and loved ones of victims couldn’t hide their anxiety in having a glimpse of the said list.  They scrolled through the said list and those whose loved ones were found on the list couldn’t hide their happiness and delight the same way they would do for admission lists to schools.  Those whose loved ones were missing on the list visibly expressed their disappointment and anguish the same way they would do if the names would be missing on admission lists for schools.  It was amidst that confusion that on March 8, Museveni came out to issue a statement to the effect that some of the victims were being held by his elite SFC under the command of his son, Gen. Muhoozi.  The demand for production of the victims before courts of law has diminished as everyone seems to be contented with both the existing and the future lists of their presumably detained loved ones.  In the meantime, the regime has resorted to spontaneous dumping of badly battered victims at different spots in the bushes.  How did the beloved country get to this!!!!
INFORMATION IS POWER AND THE PROBLEM OF UGANDA IS MUSEVENISM 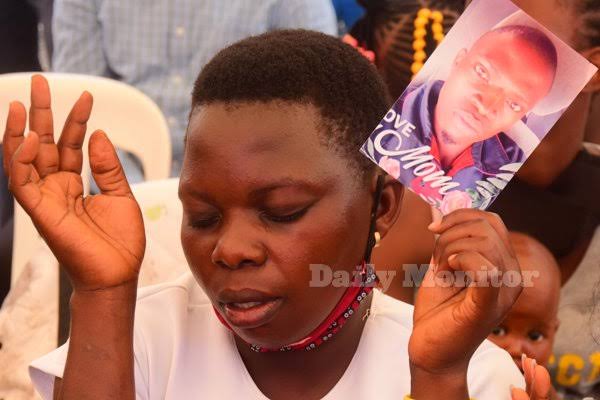 UGANDA'S GEN. TABAN AMIN HAS NO SPECIAL PERMIT FOR ILLEGAL ACCUMULATION OF WEALTH