Share on FacebookWhatsAppTweetShare
The Infiniti Q60S Red Sport 400 AWD reminds me of the greatest car Infiniti never built. It was called the Eau Rouge—named for the famous corner on the Spa-Francorchamps circuit—and it transplanted Nissan GT-R power into an Infiniti Q50. I drove the prototype in England in 2014 and concluded that yes, of course, they should build that. As is so often the case, I was wrong.
The Eau Rouge did accurately preview the Red Sport AWD models (Q50 sedan, Q60 coupe) in that it used a turbocharged V-6, a torque-converter automatic, and an all-wheel-drive system to deploy power. The concept was sound. But the problem with the GT-R’s barbaric 560-hp V-6 is that every other component of the car must step to that level. If you have 560 horsepower under the hood, then you need 560-horsepower brakes, and 560-horsepower suspension, and 560-horsepower tires. Otherwise you just have a goofy machine that might post some nice numbers in a straight line but falls apart everywhere else.
AU REVOIR 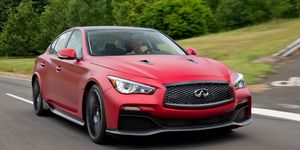 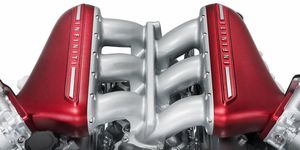 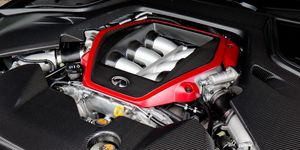 Remember the 2010 Ford Taurus SHO? It had 365 horsepower and reached 60 mph in 5.2 seconds (which, we noted, was quicker than the contemporary Audi S6 with its Lamborghini V-10) but used the same tiny brakes as any other Taurus. It was kind of a mess. Even the all-wheel-drive system wasn’t up to the task, often fragging the undersized power transfer unit that sent power to the rear (they upgraded that later, at least). My 2010 Lincoln MKT EcoBoost, sharing the same basic components, destroyed the rear half of its drivetrain. These are the problems that arise when you’ve got a swole engine in a dadbod car.

And while the Q50 and Q60 are, by dint of their rear-drive platforms, inherently higher-performance cars than the ol’ Taurus, they’re not on the level of a Nissan GT-R. The Eau Rouge made that clear enough. Granted, this was a one-of-one prototype, but it was discombobulated by its own horsepower. It kept lighting up the inside rear tire out of corners, and the GT-R engine and automatic transmission seemed an unhappy marriage. This is a powerplant that likes instant, brutal upshifts and dramatic zings to the upper reaches of the tach on downshifts. If there’s such thing a dual-clutch kind of engine, the VR38DETT is it. But the Eau Rouge was really Infiniti’s mood board for a higher-performance Q50, and the result of that is the Red Sport 400. Evidently, Infiniti flogged the Eau Rouge around the proving ground and concluded that 400 horsepower might be more like it.
Q60 RED SPORT 400 REVIEWED
2021 Infiniti Q60 Struggles to Engage Its Pilot
They were right. The Red Sports aren’t Infiniti GT-Rs. They’re extremely quick and quite vocal—the bark of exhaust recalls the original G35 coupe—but intentionally mellower than a full-on performance version might be. They’re like other companies’ penultimate performance cars, the BMW M550i or Cadillac Vs (the sub-Blackwing ones). Except Infiniti doesn’t offer anything above them. There’s no NISMO for Infiniti, no analogue to Lexus’s F cars. That’s what the Eau Rouge would have been, maybe. But it would have taken a lot of work, and hard-edged sedans (and coupes, for that matter) are a tough sell. Red Sport 400 was the right call.
This content is imported from YouTube. You may be able to find the same content in another format, or you may be able to find more information, at their web site.

In the Q60’s case, the result is perhaps 75 percent of the GT-R’s performance, with twice the comfort for half the price. No, it’s not a hardcore sports car. But if you happen to run into a JDM GT-R out on a back road—as I inexplicably did—it can hang. Sure, that was a much older car. But the bloodline was there: six cylinders, turbocharged, all-wheel drive. After a full-throttle blast down a straight, I pulled over and let him pass. Away from the next stop sign, I listened as he ran up through the gears, the violent induction noise commingling with the rip of the exhaust. The Red Sport 400 doesn’t sound much different. It’s not so savage, but you know it belongs to the same family tree. And it can also relax in a way that the GT-R simply never does. It’s the GT, without the R.

A DISTANT COUSIN, OUT FOR A DRIVE.

That might bum you out, but at least you know Infiniti made a conscious decision to draw the line right here, and that decision was informed by their experience with the Eau Rouge. Which, you’ll notice, is not in production. But the name is still out there, waiting for the car to do it justice.