Agriculture file photo - Image may be subject to copyright 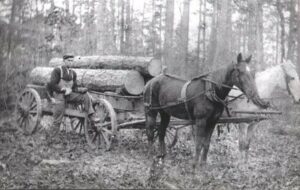 My maternal grandfather left the timber stands of South Arkansas to serve in World War I. When he returned, and for the rest of his life, he and my grandmother farmed in rural Dallas County, Arkansas. 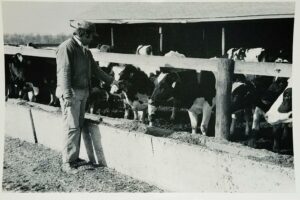 When my paternal grandfather was serving in the Army during World War II, he rode through Northwest Arkansas from his home in Kansas to Camp Robinson in Little Rock, Arkansas. It was then he decided that if he returned from the war he was going to be a farmer. In 1948, my grandparents bought land in Benton County, Arkansas, and started a dairy. They had one of the first Grade A dairies in the area, and that farm eventually became my parents’ farm.

Like my grandfathers, many veterans today have found careers in agriculture to be a great fit for their post-military life—and veterans are a great asset to agriculture. The average age of farmers in the United States is 58 (2017 Census of Agriculture). Now is the time for younger farmers to take the reins, and help care for our land and animals. Military veterans are ideal candidates for farming.  In fact 11 % of our nation’s farmers are U.S. military veterans according to Census data. I am glad to know that veterans are stepping in to fill this need. 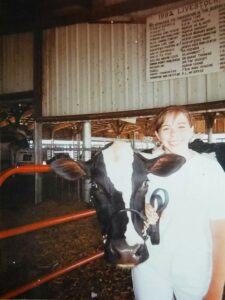 I grew up raising and showing dairy cattle, and was very active in 4-H, a youth development and mentoring program. I completed degrees in Animal Science and Agricultural and Extension Education at the University of Arkansas, and then joined NCAT as a Sustainable Agriculture Specialist. NCAT, a national nonprofit that focuses on sustainable energy and sustainable agriculture projects, has six offices across the country. I am now NCAT’s Southeast Regional Director based in Fayetteville, Arkansas. 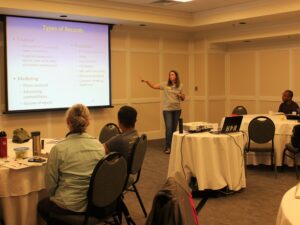 Since 2003, I’ve worked with farmers across the country through NCAT’s largest and longest-running program, Appropriate Technology Transfer for Rural Areas, a national sustainable agriculture information service most commonly referred to as ATTRA. ATTRA is a Farm Bill Authorized program, and receives its funding from the U.S. Department of Agriculture’s Rural Business-Cooperative Service. Through ATTRA, we develop educational resources and provide training and technical assistance for farmers, including farmer-veterans.

In 2011, NCAT partnered with the newly formed Farmer Veteran Coalition to host a series of workshops specifically for veterans. During those workshops, we saw the veterans’ strong interest in farming and the ways they connected with each other through agriculture. At the time, Terrell Spencer, an Army veteran and a beginning farmer himself, was on our staff. He knew how farming had helped him recover from war, and he felt compelled to share that with his fellow veterans. 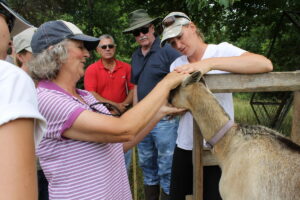 Two veterans checking on a goat during Armed to Farm training. Photo courtesy of Margo Hale.

Terrell and I, along with other NCAT staff members, worked together to plan Armed to Farm, a free, week-long sustainable agriculture training program for military veterans and their spouses. Armed to Farm includes classroom sessions, farm visits and hands-on activities. We held our first Armed to Farm in Fayetteville in June of 2013. Since then, NCAT has worked with a variety of partners to host 24 Armed to Farm trainings in locations across the country, training more than 550 veterans from 41 states.

Veterans are drawn to farming for many reasons. Veterans often tell me they like farming because it is life-building. Some of their experiences in service were difficult and destructive, and they want to be involved in positive activities. Many veterans turn to farming as they deal with Post-Traumatic Stress Disorder, traumatic brain injury and other effects of war. Being outside with nature is peaceful, and taking care of crops and animals gives them a sense of purpose. 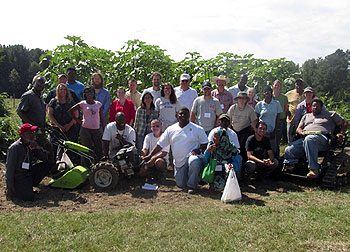 I have seen several studies and anecdotal evidence which indicate farming has proven therapeutic value. One Armed to Farm alumna is an Air Force veteran, farmer and doctor at Walter Reed Hospital. She prescribes gardening and farming to her patients, and has seen positive results. Another Armed to Farm participant shared that he was on the verge of suicide, but he remembered his pigs needed to be fed—so he got up and took care of his pigs. While not every veteran pursues agriculture for therapeutic reasons, I believe they all find a greater purpose in farming.

In addition to providing emotional benefits, farming provides a career in which veterans can be their own boss. Perhaps working in an office setting isn’t an option, but working outside and setting their own schedule is just what they need.

Veterans make great farmers because they are not afraid of hard work or setbacks. They are not deterred when things go wrong, and in farming things always go wrong! But veterans are problem solvers. If they encounter an obstacle, they quickly reassess, formulate a new plan and follow through. The mission mindset they honed in military service is a great asset for farming. They also have entrepreneurial spirits. So many veterans pursue not just one or two farming enterprises, but also produce value-added products, and have creative farm business ideas.

Beyond their farming endeavors, the drive to serve is clearly their mission. They want to grow healthy food for their families and communities, and help other veterans and farmers succeed. An unexpected result of Armed to Farm is the network of veterans that has formed. Our alumni support each other, learn from each other and cheer each other on. They live in different states, have different farming operations and served in different branches at different times. Despite these differences, they all connect over their desire to continue serving their country through farming. 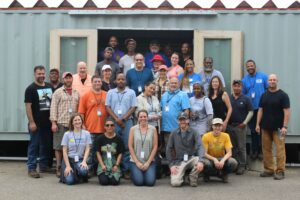 What do you say if a friend gets Covid?

NTVUganda has added ON THE GROUND: MP Zaake talks recovery during lockdown video

NTVUganda has added UNRA to demolish houses in Busia video

Sarah McLachlan – In the arms of an angel