A female African lion, stands on the branches of a tree at the Ramt Gan safari near Tel Aviv, Israel, Tuesday, Nov. 26, 2013. Tree-climbing lions are relatively uncommon and are best known for their populations in Uganda's Queen Elizabeth National Park and Tanzania's Lake Manyara national Park. (AP Photo/Ariel Schalit)

Comment by MARTHA LEAH NANGALAMA – The global reporting on the 6 lions which were poisoned to death in Queen Elizabeth National Park in Uganda has not been truthful. In Uganda, many Native Ugandans have been evicted from their land. Many are in squalid IDP camps not even fit for Museveni’s refugees. However, many have encroached on forests hence creating a man vs. animal conflict.

Some of you will remember Uganda media covering stories about gorrillas invading people’s fields and grabbing babies and killing them. This is because we invaded the natural habitat of those animals. We need to stop the rampant land grabbing for even humans also need a home.

If you want to report on why lions (your beloved animals) are being poisoned, look at the region where these things happen.

This is not the first incident involving lions at Queen Elizabeth National Park. In April 2018, a pride of 11 lions, which consisted of three adults and eight cubs, were killed, with poisoning being the likely cause of death, according to a statement by the Uganda Wildlife Authority from 2018 addressing the incident.

This Queen National Park is located close to Lake Edward which is close to the Oil region. Hundreds of thousands of Ugandans have been evicted at gun point from their land in this region. THEREFORE (we must always have a Therefore), why should not they encroach on the National Park? And if they do and plant maize and bananas, why should the lions eat the crops.

To understand the issues of a gorilla grabbing a child and dismembering the child, you need to understand that the humans are growing food in the forest where the animals live and the animals are threatened by humans.

Let me give you an example (real life). We used to have a forest called Busitema in Eastern Uganda, between Iganda and Tororo. In this forest, there were many baboons. The baboons took to attacking women. WHY? It was mostly women going into the forest to collect firewood. The baboons felt threatened by women due to women always going into the Busitema forest to get firewood.

There are many factors which lead people to kill lions. We should not kill our national treasures. However, if you had goats, cows and chicken and every morning, you wake up and a few of them are dead or have gone missing, what do you do? Even crocodiles have taken to eating Ugandans.

According to Uganda media, there were also 10 vultures which died from eating the carcasses of the 6 poisoned lions. I bet the numbers are much higher but who is gonna admit it????

In April 2018, 11 lions, including eight cubs, were found dead of suspected poisoning. In May 2010, five lions were killed in a similar incident. Tourism is a top foreign exchange earner in Uganda, contributing almost 10 per cent of GDP and 23 per cent of total foreign exports, according to the UWA. 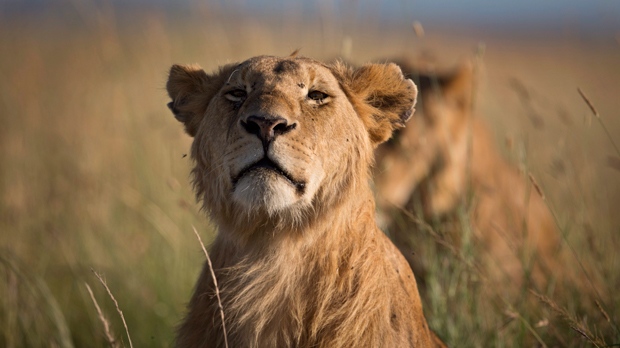 In this Tuesday, July 7, 2015 file photo, a lion sits with other members of the pride in the early morning, in the savannah of the Maasai Mara, south-western Kenya. (AP Photo/Ben Curtis, File)

TORONTO — Six lions were found dead due to possible poisoning in Queen Elizabeth National Park in Uganda on Friday, according to officials.

The bodies were found missing several body parts and surrounded by eight dead vultures, indicating the lions may have been poisoned, Bashir Hangi, communications manager for the Uganda Wildlife Authority (UWA), said in a statement on Saturday.

Because of the body parts missing, the UWA said they couldn’t rule out illegal wildlife trafficking.

Hangi said that he is “saddened” by the deaths and the UWA “strongly condemns” illegal wildlife hunting.

A team of investigators is on the ground and collaborating with police in Kanungu district, the statement said.

“It does not only impact negatively on our tourism as a country, but also revenue generation, which supports conservation and community work in our protected areas,” Hangi added.

Limo Driver Died of COVID-19 After Picking Up Brazilians Who Were at Trump’s Mar-a-Lago, Family Says