UGANDA: Why Gen. Tumwine’s arrogancy will land Museveni and NRM in trouble if not checked

Posted by The Messenger
A A 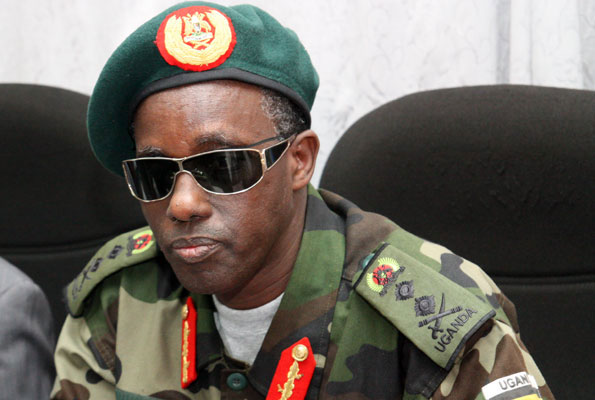 Because of his lack of empathy and a wild ability to spit whatever pleases him with little or no regard to what it might mean to the public, Security Minister General Elly Mayanja could indeed be a real time bomb upon which President Museveni and the ruling regime could be sitting.
Just over three months ago, the loose mouthed General provocatively hailed his security forces on their role in quelling the November 18/ 19 protests that claimed over 50 people.
He said the police had done the right thing by shooting and helpless and unarmed protesters who had gotten onto the streets to demand the arrest of the National Unity Platform leader Robert Kyagulanyi from the Eastern district of Luuka.
Appearing in a heated UBC’s Behind The Headlines show shortly after the tragic events, Tumwine shrugged off accusations by MP Ssemujju Nganda that the security forces were high handed, and should be prosecuted for extra-judicial killings.
“The General blames everybody except himself. Majority of the people you killed were bystanders, and you don’t feel sorry? You should change the way you speak. You’re an elder now, you shouldn’t be speaking like an iron fisted young man who went to Luwero,” charged Ssemujju.
On his part, an arrogant Tumwine argued that there should only be blame for the perpetuators of the protests but none for those that worked to bring it down. He faulted the Kira Municipality MP and his group for focusing solely on the consequences of the protests while ignoring the cause.
” In my culture, when one starts a fire here, you go and start a fire the other end, so that when the two fires meet, they can’t continue burning,” Tumwine shot back.
“All security forces have one responsibility, protect the sovereignty of the country, protect the life and property of the people.  I really congratulate our security forces for what they have done, restoring peace and order within two days was not an easy thing for a premeditated plan to burn Kampala and destroy property.” he said.
Tumwine’ s reaction as Minister in charge of the country’s security, coming at a time when the majority of the country was grieving over the lives lost was reckless and uncalled for. And as expected, his boss General Museveni would be held responsible for his man’s miscalculation of speech.
In his petition challenging president Museveni’s victory in the Jan 14 elections, NUP’s leader Robert Kyagulanyi Ssentamu used Tumwine’s remarks on the riots among the points to prove there was not fairness in the elections. He said the shameful arrogance of the Minister directly showed orders for the high-handedness of the security apparatus were directly coming from the Commander in Chief Gen Museveni.
Nonetheless, President Museveni in his defence seems to have realized how much trouble he could find himself if he doesn’t detach himself from the errant Security Minister. As such, he denies ever ordering any body ” not even security minister Tumwine” to harass opposition candidates and their supporters.
But just even before that storms calms down, Tumwine gets at it again, this time on the impasse between the Ugandan government and the West, specifically the European Union [EU].
Tumwine, on Tuesday 16 threatened the EU with a ban on her members from entering Uganda unless they reconsider the decision on sanctions for some Ugandan officials.
During an interview with CBS radio on Monday, the Security Minister insisted that Uganda was a sovereign state that no longer needed to kneel before Western powers as gone were the days when they couldn’t do without them.
“They are our friends but they must know that we don’t live on their donations. I  don’t have any plan of going to their countries because Uganda is the best country. Don’t they come here? If they put sanctions on us, we shall also ban them from coming here, we shall see who loses most,” Tumwine said.
“Since 1962, Uganda can decide its issues conclusively, so let them talk. We don’t fear whites, let them do what they want but Uganda is still in our hands.”
On the issue of Human rights violation by the ruling government as noted by the EU parliament last week, Gen Tumwine rubbished the allegations.
“Freedom and liberty in Uganda were not brought by whites. It is we the National Resistance Movement that brought them to Uganda.”
Gen Tumwine’s fury follows the move by EU Parliament to recommend sanctions against Ugandan individuals and organizations which they claim are responsible for human rights violations during the recent general election. The EU Parliament said the elections were not democratic and transparent.
In its statement issued on Thursday, the Parliament resolved that “…sanctions against individuals and organizations responsible for human rights violations in Uganda must be adopted at EU level under the new EU (European Union) human rights sanction mechanism, the so-called EU Magnitsky Act”.
The resolution was endorsed by 632 votes, with only 15 against and 48 abstentions.
The resolutions were based on human rights violations that happened during the recently concluded general elections.
Also during his state of the nation address on matters of security last Saturday, y President Yoweri Museveni told off EU Parliament that Africans specifically Ugandans are not interested in travelling to their countries.
“I read in the newspapers about the European Union Parliament sanctioning some Ugandans from travelling. For anybody to think that Africans are dying to go to Europe is something that shows a lack of seriousness. Well, I need a lot of persuasions to leave Uganda. I normally do it for friendship,” Museveni said.
With the West remaining substantial contributors to the country’s development in both economic Aid and budgetary support, now seems not the right time to provoke them moreso by an officer at the rank of Tumwine in government.
Tags: eumuseveninrmTumwineupdf
ShareSendTweetShare