UGANDA: This is how Bobi Wine could share the spoils if Museveni chooses to openly back Oulanyah against Kadaga in the speakership race

Posted by The Messenger
A A 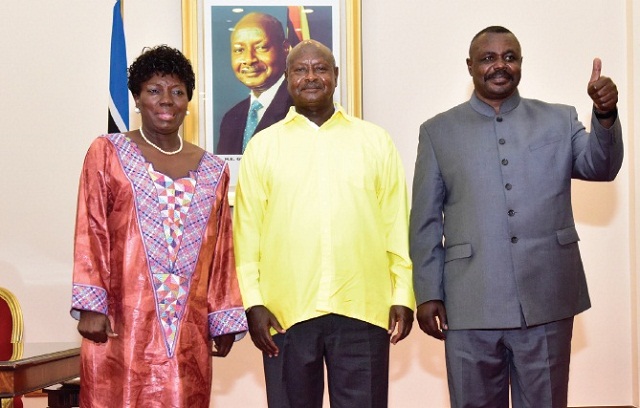 With Parliament once again set to convene in the next couple of months to decide on who will be the Speaker of the House for the next 5 years, President Museveni – as chairman of the ruling National Resistance Movement will find himself pressed to the wall in the matter as was the case in 2016.
The contest for the role in the tenth parliament only took the intervention of Museveni to set Kadaga and his deputy Jacob Oulanyah apart in a do or die battle for the top  job of the legislature.
Although it has widely been reported that the 2016 dialogue involved a back door deal for Kadaga to give way for Oulanyah when the current term expires, it has increasingly shown that the Kamuli Woman Member of Parliament will hold onto the position, at least  until 2026.
Last year in August, Kadaga for the first time came out publicly to make her ambitions for the speakership of the eleventh parliament during an interview with the NTV. This has been followed by a series  of other open declarations since, mainly after comfortably winning re-election in Kamuli.
On the other hand, Oulanyah does not seem like he will be giving way. Having tipped veteran politician Sam Engola to become the party Vice Chairman for Northern Uganda in the August last year CEC elections, he will definitely come back for this year’s contest rejuvenated.
The unprecedented performance of NRM in the north in the Jan 14 polls however gives Museveni all the reasons to want to reward the region preferably by supporting Oulanyah’s bid for the Kadaga’s speakership.
For now however, it seems the Northern NRM Vice Chairman will not be certain of Museveni’s direct backing due to the complications it may have for the party already facing pressure from a seemingly more united opposition.
Besides, the president could still feel indebted to let Kadaga alone after announcing in the December that he had resolved all his differences with the leader of the legislature after publicly clashing on a number of occasions including on the COVID19 cash bonanza for the MPs in March last year.
If Museveni was to openly back Oulanyah against Kadaga, there would be a high likelihood for a shock since the opposition, for the first time has over 100 MPs who are all most likely to back the popular woman from Kamuli. Not that only, there is a sizable number of independent  MPs already frustrated by the chaotic party primaries of September last year which caused them to rebel against the party to run against official candidates. this means that a possibility of rebelling again should they be ordered to vote against Kadaga can not be ruled out completely.
That said, Museveni must be knowing that letting Kadaga officially rely on the opposition to retain the speakership would be a complete disaster for his government. Even if she were to lose, it would possibly tilt her allegiance more to the opposition and an irreparable rift would emerge in the house between the pro and  anti Kadaga members which would make it hard for the party in power to easily win when contentious issues come up for voting in the house.
Although Museveni must be scratching his head about his loss to Bobi Wine in Kadaga’s Busoga, it also must be noted that the margin was not that big. And the fact that the sub region overwhelmingly voted for party MPs should also be considered. This thus means that winning it back for the party is not as hard as it could be for Buganda where not only he was defeated but also majority of his MPs and local government candidates.
Another very important factor worthy looking at is the fact that it required the opposition only a little more than 8% more than they gathered together to deny Museveni the 50% + 1 and force a rerun. And if Museveni choses to offend Kadaga who is dearly loved in the sub region, who knows what would be their response in the next election?
That thus leaves the president with only one option which is to talk either of the two of his cadres out of the race, place whoever he chooses wherever he wants as long as it is still juicy enough so that the speakership wont be missed.
Tags: Bobi WineKadagamuseveninrmOulanyahparliament
ShareSendTweetShare

UGANDA: WHY A POST 2021 ELECTIONS STATE OF EMERGENCY IS IMMINENT IN BUGANDA