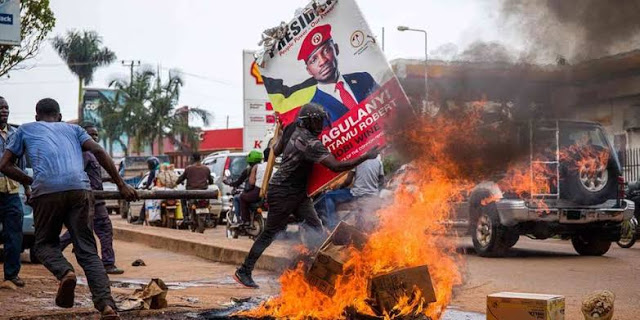 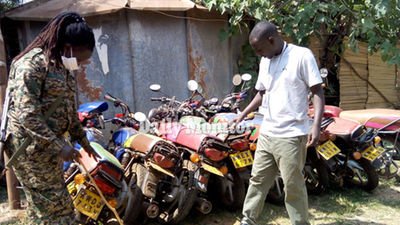 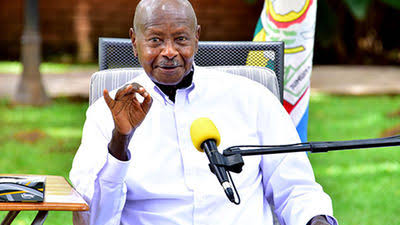 The above subject matter refers.

Here-below, may you please find an update on the above subject matter.

The general Security situation in the entire country is calm.  There is no cause for alarm.

There is any sign of a potential of politically motivated protests anywhere in the country.  The mid November ‘dose’ administered by the security forces under your able overall command is doing incredible magic.  No one can dare to engage in any form of public protests.  Even if Bobi Wine or anybody else hacked such a plan, it would flop as no one can dare come out to protect for fear of a repeat of the mid November 2020 response.  Even if Bobi Wine’s movement had continued being restricted to this date, no one would have come out to protest.  Due to lack of organizational capacity, even the much anticipated protests at our diplomatic missions in the western capitals has not materialized.  However, the heavy deployment of our security forces in urban centres and the central region in particular should not only be maintained but reinforced.  This is not to mean that there is a surge in the threat level but such a move will boost the scare factor.  We suggest that resumption of unpopular law enforcement measures by KCCA on hawkers and other vendors, the Fisheries Protection Unit, regulation of the public transport sector and others be delayed until after the situation has calmed down.  This will help avert any ground for disgruntlement and public discontent than can spark off urgly scenes.

Despite the toning down of the incitement language by the usual culprits, Buganda’s defiant mode still thrives.  The Kingdom and the Catholic Church have some how toned down not out of conviction but out of fear.  More clandestine political moves that can isolate both Buganda Kingdom and the Catholic Church in Buganda are being devised.  So far, the reinstatement of social media has not attracted credible internal traffic of offensive communication.  Our IT experts attached to UCC are registering progress in tackling the externally based negative propagandists.  We suggest that at the next national address, not only stern warning ought to be issued against misuse of social media but to clearly emphasize resolve to dealing with any kind of negativity.  The call for dialogue ought to be treated with the contempt it deserves and a clear message of none compromise should be put across.  The pertaining situation calls for more of a resolve to subdue than compromises.

In line with your instructions, a close watch is being maintained on both Dr. Besigye and Gen. Tumukunde.  So far, nothing substantially negative has been registered but the monitoring is being expanded to cover their close associates.  At your next national address, a preemptive stern warning targeting the two ought to be indirectly sent.  This is because, with the urban public loosing trust in Bobi Wine, they may turn their hope to the two former army officers.

Both the general public and Bobi Wine in particular are convinced that nothing positive will come their way from the Supreme Court.  His court option was driven by the need to remain politically relevant and to buy time more so after realizing that protests were no longer tenable.  We only need to urge out partners in the judiciary not to entertain damaging disclosures during the hearing.  We are also devising a scheme that will trigger an Internal rebellion within his supporters.  The scheme has been delayed by his failure to direct his elected leaders to boycott taking of off oath.  If he did so, they would all humiliatingly defy him.  After the determination of the petition, his supporters will get more disappointed with him as he will have no way forward to offer to them.  It’s at that stage that we shall need to focus more on Dr. Besigye and Tumukunde.

The possible direct involvement of the usual ‘Neighbouring Country’ is still being investigated but this should not stop another round of preemptive stern warning.  The last warning seems to have compelled it to either pull back or gone more underground.  The western donor community is at it again with the usual rhetoric and pretence.  As usual, they will soon back off once the Internal opposition looses momentum but if only we can sustain the current state of calmness in the country.  We suggest that our diplomatic players double their efforts in diffusing the current negativity.  A stage-managed mega security breach in the region with direct bearing on Uganda will help reshape West’s opinion.  It has done miracles in the past and it can work again.

Detractors have deliberately opted to describe the ongoing mop up operation against insurrectionists and potential insurgents as kidnaps.  Otherwise the exercise is going on uninterrupted with overwhelming positive results being registered.  To counter the negatives publicity and sway the narrative, we are considering setting free a small group of such detainees after an understanding that they will publicly claim to have escaped from a rebel training camp where they had been lured by the opposition.  We seek your approval in this regard.  We are grappling with our own people who are seeking cheap popularity through publicly condemning and criticizing the exercise.  The likes of the Secretary General Kasule Lumumba and the D/IGP, Gen. Loketch a few of such individuals who should be brought to order.

The enforcement of of COVID-19 SOPs by security agencies has been a big weapon in containing the opposition’s negative activities.  The drop in figures of infections and deaths coupled by the easing of some measures has resulted in the gradual diminishing of the fear factor.  We suggest that adjustments be made in the COVID-19 statistics in line with the pertaining political and security situation.

UGANDA: Why do a business plan?

GLOBAL HEADLINES We may have missed