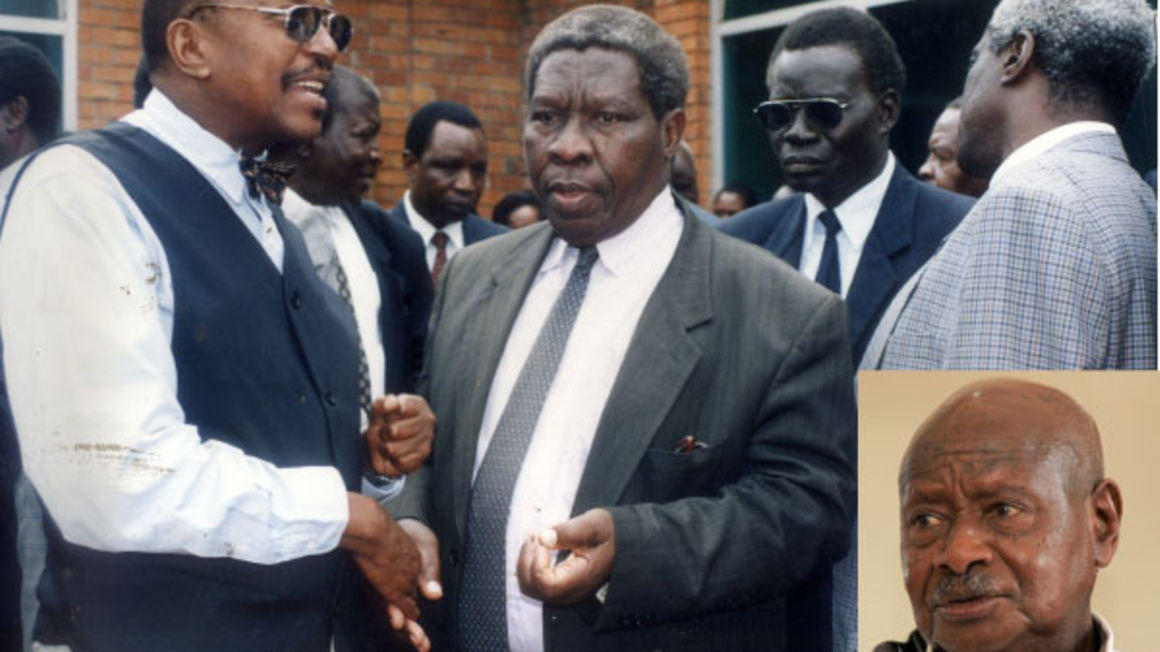 Believe Museveni at your own risk – former MP Kanyomozi

Former minister and legislator Yona Kanyomozi, who was Mr Museveni’s teacher in O-Level at Ntare School, describes Mr Museveni as a very determined person who can do anything he sets his mind on at whatever cost.

He says Mr Museveni nurtured a vision and mission of getting power at all costs and the 1980 elections came as a perfect excuse for him to execute his long planned mission.

Mr Museveni, according to Kanyomozi, was even offered a ministerial position by then president Milton Obote after the 1980 elections but he turned it down and chose to start a guerrilla war that brought him to power five years later.

Kanyomozi, like many other Uganda Peoples Congress (UPC) stalwarts, dispute the claim that the 1980 election was rigged.

“On voting day, December 1980,” he narrates, “in Bushenyi, we didn’t vote because of inadequate voting materials but Radio Rwanda announced that the Democratic Party (DP) had won in Bushenyi South yet we had not voted yet. That is how the rumour began that UPC had rigged the elections.”

To him, the claim that the election was rigged was just an excuse to wage a war against and overthrow the government. The people who joined Mr Museveni and assisted him attain that vision, Kanyomozi says, were duped.

“He [Mr Museveni] is a pathological liar and the people who joined him didn’t know that,” he says.

He adds: “They joined him very blindly and believed he was a socialist, a nationalist but he was nothing of the sort.”

Kanyomozi, however, says Obote made Mr Museveni’s lies believable. He says the former made grave mistakes that made it easy for Mr Museveni to get a base and eventually overthrow him.

One of Obote’s mistakes, Kanyomozi says, was the tribalism in the army and his attempt to suppress discussions about the war.

“Two thirds of the army was from northern Uganda [Obote’s home area] and the other tribes were not happy,” he says.
“The Baganda, in particular, were not happy because they were not recruited to fight the war that was raging in their region. The war became very dirty; throwing bombs in towns.

Obote didn’t allow any discussion of military issues. He created enemies everywhere, even among the Acholi because he didn’t replace David Oyite Ojok [then army chief of staff, who was a member of Obote’s Langi tribe] with an Acholi.”

But Kanyomozi acknowledges that Mr Museveni has many strengths. One of them, he says, is his ability to listen. But this listening, Kanyomozi says, is for him and not out of respect for the person he is listening too.

“You can think he is listening to accommodate what you are saying,” he says, “but he does that to decipher what benefits him and uses it as a control tool.”

He says at the beginning, Mr Museveni was pretending to be a nationalist to attract people and make a base but he has overtime revealed his true colours.

According to Kanyomozi, Ugandans who have not yet seen Mr Museveni for what he is are delusional and their expectations are misplaced.

“The expectations of the population in this government are misguided, he says. “First, no one should expect a free and fair election in Uganda. People have become so poor so they vote for a person who can afford to buy them off. Those expectations should be dismissed.”

The other misguided expectation, Kanyomozi says, is that the Opposition can unite and force the government to change anything or overthrow it.

He explains that it is impossible for the players to unite because many lack ideology and so they cannot move in the same direction for the same cause.

The concentration of authority and leadership of political parties in their individual founders, he says, does not help matters.

“Parties should have clear distinct ideological commitment. Without that, things are going to be difficult,” he says. All these events make Kanyomozi wish he was still active in politics.

He says he wishes he could still make a contribution by reminding the MPs of their constitutional role and contribute to Ugandans owning their country and their economy again.

The former legislator, who stopped vying for political position in 2011 after losing the Ntungamo Municipality seat to Yona Musinguzi, says his retirement from politics was involuntary. He says he didn’t want to lose his life over a parliamentary seat.

“When I stood in Ntungamo Municipality,” he says, “it was a near death experience for me. They arrested all my agents, beat up my campaign chairperson and the women league chairperson into a coma and even refused to allow them to go to the hospital.”

After that experience, the legislator, who had joined politics as a teenager at Ntare School, decided to quit.

He joined the Uganda National Congress (UNC), which later became UPC when he and his two friends from Ntare School attended one of their rallies in 1958.

Kanyomozi and his friends were further inspired when a year after they joined UNC, their teacher, a one Rwetsiba, joined Parliament representing Ankole.

When UNC later split into two; one camp loyal to Obote and the other to Ignatius Musaazi, Kanyomozi decided to join the camp which allied with his former teacher Rwestiba’s UPU and formed UPC.

But Kanyomozi left for A-Level studies in Nairobi, Kenya, shortly and later for university at the London School of Economics in the UK.

He, however, remained active in Uganda’s politics and even became the secretary general of UPC in the diaspora.

He returned in 1966 and joined Uganda Electricity Board (UEB) but continued to be very vocal in the politics of the day.
His friend, former ICT minister Aggrey Awori, was the director of information at Uganda Television (UTV), now Uganda Broadcasting Services (UBC) and gave him a slot for a youth programme on TV.

The programme didn’t last long because Kanyomozi was accused by the government of inciting the youth. He went back to London for post graduate studies and returned in 1969, before he left again for exile in 1971 after the army commander, Maj Gen Idi Amin, overthrew the government.

While in exile, he was also participating in the struggle to overthrow Amin’s military government. He, together with some other Ugandans, formed a group called The Save Uganda Movement, the platform on which he was invited to the Moshi Conference.

From that moment, Kanyomozi played a central role in the country’s politics, becoming a legislator in the National Consultative Council (NCC) and later minister for cooperatives in the Uganda National Liberation Front (UNLF) and Obote II governments.

His recollection of the events at Moshi and in the lead up to the 1980 elections is vivid and explains events after Amin’s overthrow.

He says at the Moshi conference, they were forced to choose Yusuf Lule as president because the Tanzanians were under external pressure not to return of Obote and his UPC party to power.
“Lule didn’t understand politics,” he says. “We decided to throw him out and we proposed Binaisa as his replacement.”
He narrates that it was Edward Rurangaranga and Mr Museveni who drove Binaisa to State House.

But there was a problem with Binaisa. The Baganda didn’t want him because of his role in the 1967 Constitution, being the Attorney General at the time. They protested and closed markets. Kanyomozi says he organised with Mr Museveni and they brought several lorries laden with food from Ankole to Kampala for city residents.

But Binaisa would also make a grave mistake when he reshuffled Muwanga from Internal Affairs and Mr Museveni from Defence, and sent Oyite Ojok on ambassadorial duties.

The Military Commission refused and retaliated by removing him from the presidency and taking over.

However, Kanyomozi explains that because the Military Commission didn’t want it to look like a military takeover, they installed Justice Polycarp Nyamuconco, Saulo Musoke and Wacha Olwol to exercise presidential powers but these were just ceremonial.

At that time, there was pressure to hold elections since it was pledged at the Moshi Conference that the country would have elections within two years but there were still stark divisions within the different groups.
“Some wanted to go for elections under the UNLF umbrella, but others wanted to go for elections as political parties. Some wanted someone with military experience, some were outrightly against a northerner or a Muganda since the previous presidents were from those regions. I suggested Bidandi Ssali and Museveni said after Amin, you can’t have another Muslim (It was the first time I was discovering that Bidandi was Muslim). Bidandi settled for the position of secretary.”
But the divisions persisted and some people walked out of the meeting that was proposing these leaders.

Kanyomozi and his group (The Save Uganda Movement) decided to join Obote’s UPC again on the understanding that Obote would relinquish the leadership of the party in two years.

UPC won the 1980 elections and Kanyomozi was reappointed minister for Cooperatives.

After the overthrow of Obote in 1985, he went back into exile and returned when Museveni’s National Resistance Army (NRA) captured power a year later.

“[Tito] Okello was very kind,” he says. “He left us in our houses and with our security, but I still didn’t feel safe so I ran back into exile in Nairobi. I kept getting information of what was happening in Museveni’s camp. I had friends in there. After Museveni captured power, I returned.”

In 1989, he and other UPC members went against Obote’s wishes and vied for seats in the National Resistance Council (NRC).
I, Tiberondwa [Adonia], [Francis] Butagira, [Philemon] Mateke and Kweronda Ruhemba disagreed with Obote and ran for NRC seats. When I entered the NRC, I became the vice chairperson of the National Economy and a member of the committee on parastatals.”

Kanyomozi never looked back and even went on to represent Uganda in the East African Legislative Assembly (Eala).

He left Eala in 2007 and attempted to go back to the Parliament in 2011 but did not succeed.

Life in Retirement
After Kanyomozi left Eala in 2007, he attempted to go back to Parliament in 2011, but did not succeed. He decided to start a consultancy firm, but that too failed.

He blames this failure on government. Most consultancies, he says, are from government and even those which do not require government clearance.

“You would win the technical and financial parts but fail to get clearance and many consultancies are from the government. So I gave up and started living on my savings.”

The 80 year old says his old days are miserable. He lost his wife a few day ago and spends most of his time by himself in his home in Mbuya, Kampala.

“The days are miserable,” he says, “and my wife, who would have made them bearable, passed away a few years ago. “But life has to go on. I like reading, so I spend most of my time reading and I am also a member of Kampala Club, so every evening, I pack my bag and go to the club.”

Ugandans need to learn to respect time, appointments and meetings

UGANDA: Kenyans in solidarity with @HEBobiWine