February 17, 2021
Written by BAKER BATTE for THE OBSERVER UG 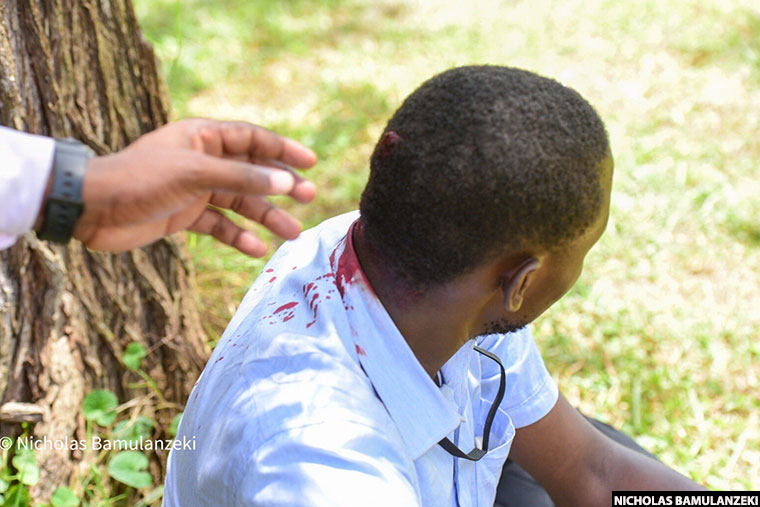 One of the injured journalists

At least eight journalists from six media houses are nursing injuries after military police mercilessly pounced on them and beat them with batons near the United Nations High Commission for Human Rights offices in Kololo today.

The journalists were covering National Unity Platform (NUP) president Robert Kyagulanyi, who had gone to deliver a petition to the UN over continued human rights violations in the country which include arbitrary arrests, murders, kidnaps among others

Among those most injured were NTV journalist, John Cliff Wamala who was hit on the head causing a deep cut. Others include; Timothy Mulungi and Henry Sekanjako of New Vision, Josephine Namakumbi and Joseph Sabiti of NBS TV, Irene Abalo Otto of Daily Monitor, Geoffrey Twesigye of NTV and Amina Nalule of Galaxy FM, among others. The Observer photojournalist Nicholas Bamulanzeki’s camera was also damaged.

Kyagulanyi left the NUP offices in Kamwokya with a group of aides and party officials but the police had earlier warned the UN office was only expecting three people accompanying Kyagulanyi, a directive he defied.

He arrived at the UN offices located on Prince Charles Drive in Kololo, a few minutes to 1 pm, and only his vehicle was granted access by the heavily deployed security. As soon as his car entered the UN premises, security ordered other vehicles to leave the vicinity immediately. Within seconds after the directive, military police descended on Makindye East MP-elect Derrick Nyeko’s vehicle shuttering its windows and windscreen.

After the assault on Nyeko, the military withdrew from the scene, leaving security in the hands of the police. The police then mounted a human blockade near the Ethiopian Embassy barring anybody from accessing the UN High Commission for Human Rights offices.

The journalists then camped just behind the human blockade waiting for Kyagulanyi to leave the building which was quite some distance from where they were. For about 30 minutes it appeared as though there was a mutual understanding between the police and the journalists that this was the point that won’t be crossed.

Meanwhile, two military vehicles with about 20 officers returned to the scene and then drove away towards the UN office. After about 10 minutes, the same vehicles returned where the journalists together with some politicians and NUP bloggers who normally move with Kyagulanyi had pitched camp. As soon as the vehicles came to a stop, the commanding officer jumped out of it and then thundered.

“All of you get out of here.” But even before he could finish the sentence, the military had already pounced on journalists and everybody whipping them with batons indiscriminately.

For Nalule, the only reason why her head was not shuttered was that she has dreadlocks and was putting on a head scuff.
Aloysius Mukasa, the MP-elect for Lubaga South was also not spared by the military. He wondered why they would assault them in front of the seat of the United Nations High Commission for Human Rights. Mukasa whose coat was torn up by the military said its such actions that push the country to violence.

After chasing the media to about 300 meters from where they had camped, the military withdrew and again left the police to man the security. However, 15 minutes later they returned and chased them further away from the new spot where they had converged trying to catch some breath after a long chase.

This is not the first time that the military is assaulting journalists especially those covering Kyagulanyi. Throughout the two months of campaigning, journalists sustained injuries as police and other security agencies at times intentionally targeted them for reporting about what was taking place on the Kyagulanyi campaign trail.

UGANDA: A threatened Muzukulu's letter to his obstinate grandpa Y. K. Museveni on assaulting the media

TANZANIA: Says anti-gay squads are not government policy, but does not sanction governor hunting for LGBTQ

Joe Biden, in victory speech, says, ‘This is the time to heal in America’