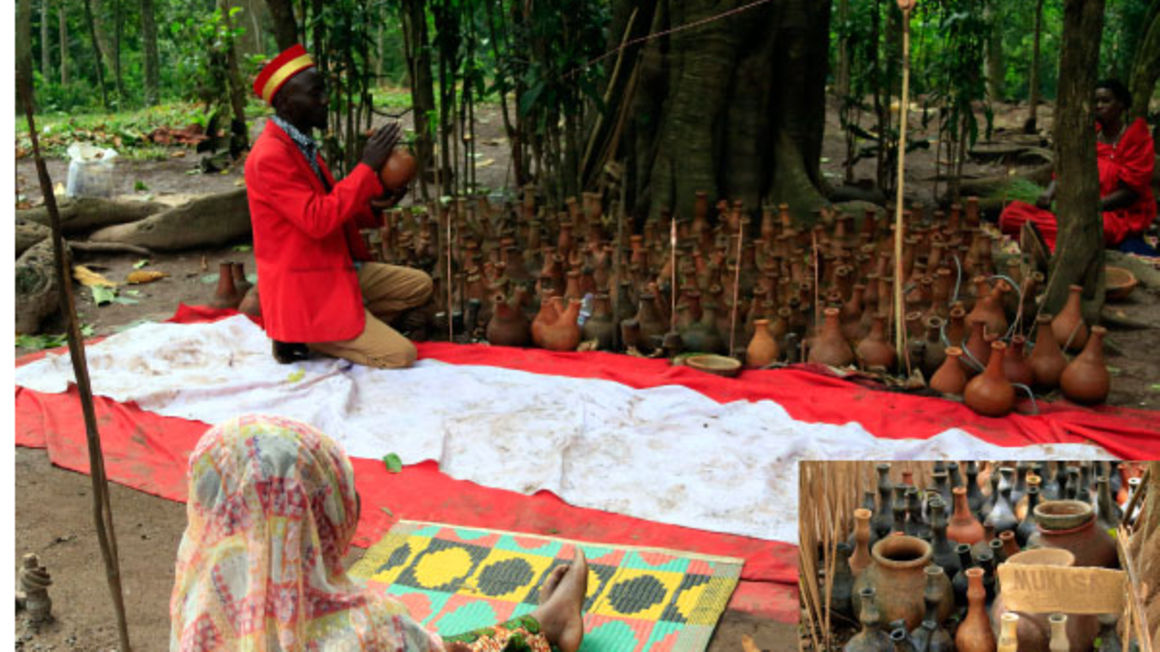 When I arrived at the ancient traditional religious shrine archaeologically known as the Tanda Pits, on a cool morning in Tanda Village in Mityana District, there was a beehive of activity as some pilgrims went about with their prayers and smoking pipes, while others were chatting, cleaning or preparing meals for the day.

I parted with Shs2,000 for my visit and as I waited for my change and tourist receipt at the main white gate, I witnessed as every newly arrived pilgrim went through the mandatory cleansing ritual of washing their hands with water mixed with herbs at the right side of the gate.

According to information available at the Department of Antiquities and Museums, these (Tanda Pits) are popularly known as “Nyanga za Walumbe.”

The site is regarded as the home of Walumbe (god of death), according to the concept of death and creation in Buganda Kingdom.

There are several versions of the mythological figure of Walumbe. The common myth has it that Kintu; the first man on earth, lived alone with his only beloved cow that he depended on for milk.

In this folklore, the creator of all things, named Ggulu, lived in heaven. Ggulu had three children, a daughter named Nambi and two sons: Walumbe and Kayikuzi.

On several occasions, Nambi and her two brothers would descend onto earth to play and adventure. On one of their visits to earth, they met Kintu grazing his cow. Nambi fell in love with Kintu and they got married.

Walumbe was not pleased with this union and vowed to wreck their marriage. Ggulu did not want Walumbe, his troublesome child, to follow Kintu and Nambi back to earth.

When Nambi returned to her father’s home to collect millet for her chicken that she had forgotten, Walumbe stealthily followed her back to earth.

Legend has it that Walumbe’s arrival in Kintu’s homestead was the beginning of sickness, misery and death on earth.
Walumbe means disease and death in Luganda, the language of the Baganda people of central Uganda.

Ggulu sent Kayikuzi to earth to take Walumbe back to heaven. When Kayikuzi arrived on earth, he dug the ground in search of his brother and a fight ensured. Kayikuzi failed to capture Walumbe and the pit shafts are testimony of their fight. The spirits of Kayikuzi and Walumbe are still believed to roam the area in the fascinating age-old Buganda legend that has been retold for generations.

The site is covered in a dark thick forested area providing a cool atmosphere for the pilgrims throughout their stay.
“Our ancestors prefer many trees that offer a good environment for the pilgrims to rest,” my tour guide and one of the caretakers of the shrine, Besweri Ddamba, tells me as we stroll towards the actual compound of the shrine.

There are more than 280 pit shafts believed to have been created by Walumbe as he escaped from Kayikuzi. Over time, some pits have been filled with soil due to erosion.

“After killing Nambi’s children, Walumbe dug these pits (nyanga) as he ran to hide from his brother Kayikuzi, who was under instruction from their father Ggulu to take him back home by force and save Kintu’s family of further death and misery,” Ddamba says.

The Baganda believe earthquakes or tremors are a result of the fighting between Walumbe and Kayikuzi, in an attempt to take him back to heaven and save earth of all misery, sickness and death.

The main shrine, a huge pit shaft known as Embuga Ettanda where Walumbe is believed to have disappeared in the earth, is covered with three pieces of bark cloth.

There are several other shrines known as embuga in Luganda for the gods and deities, some in form of grass-thatched houses, while others are in the open holding spears, shields and calabashes, among other cultural items.

There are also several fireplaces (ebyooto) dedicated to different gods, including Mukasa, Kibuuka, Musoke, Wanema and Bamweyana, among others.

All the pilgrims must remove their shoes as they enter the main shrine. The pilgrims are diverse and have come for healing and to pray for blessings, peace in their homes, love, harmony, fortune and prosperity in their social and economic endeavours, including those who wish to bare children.
The believers also pay homage to Walumbe and the other deities.

The pilgrims who perform rituals at the shrine make offerings of coffee beans, chicken, sheep, goats, cows, local brew made from bananas and sorghum called tonto, millet, fruits and water, among other items to the gods and deities.

“We don’t offer medicine here, and the pilgrims are not allowed to offer money to the gods. People come here with dreams to be healed. People get healed after praying to Walumbe, who reveals himself to them through dreams,” Ddamba adds.

There are animal horns, bells, spears and nets surrounding a fireplace for roasting meat at the Embuga ya Ddungu (god of the hunters).

“If you have dreamt of any animal and you want to share it with others, you bring it here. You could have dreamt of roasting or slaughtering the animal or bringing it here to pay the custodians of this shrine,” Ddamba says.

“If someone dreams of sacrificing an animal, he or she can do it here for cleansing the bad omen. And when the Kabaka appreciates the work we are doing here, he will direct us to slaughter a cow or goat,” Ddamba explains.

“At the Embuga ya Musoke (god of rain), you must drink water that is fetched from Musoke’s well that is nearby. You only come here when you have dreamt of drinking this water for blessings and sharing it with the ancestors.

I then encounter women seated on mats peeling matooke and another one pounding groundnuts in a wooden mortar. I am told these women dreamt of preparing a meal of matooke and groundnut stew to eat and share with the ancestors.
“I belong to the Nkima (Monkey) clan and our role in Buganda Kingdom is to dress the Kabaka (king) during his coronation,” Isaac Ssekanjoko, one of the pilgrims, tells me.

“One day, when I was going to school, I heard of this traditional religion. And when I came here, I discovered that worshipers of different beliefs converge at this shrine.

“Before I came here, I had dreadlocks, I was drinking beer and smoking marijuana. I have been saved from these habits and I am now committed to this religion and the Kabaka of Buganda,” Ssekanjoko adds.

There is the Embuga ya Wanema (god for the disabled persons).
“If you dream that you saw people walking with crutches and holding spears, you come here and you will be healed,” Ddamba says.

There is the Embuga ya Kiwanuka (god of war and army commander), who employs fire, dresses in red clothes, takes honey and banana juice only. It is believed his spirit moves through the Mukokowe (Ficus brachypoda) tree.

There are baskets for offerings at Embuga ya Bamweyena (god of prosperity).

I am informed that Bamweyena takes alcohol, smokes marijuana and chews mairungi (khat).

Embuga ya Mukasa (god of water and fish) has boats, oars and ensumbi (pots) with water. Ddamba tells me this is the only shrine where eating fish is permitted because Mukasa was a fisherman.

There is the ever burning fireplace for Kalisa (the cattle keeper). The fire is kept burning with only cow dung by pilgrims who have dreamt doing so. It is surrounded with baskets and spears.

The offerings for the cultivator known as Mama Nalongo Nabinene is the broadcasting of millet, simsim, maize, place traditional hoes, knives, banana leaves and a gomesi (busuuti), a Ugandan colourful floor length dress.

There are also shrines for Jjaja Muwanga, Wamagobwe, and the matriarch Nakayima, among others.

According to Ddamba, the Kabaka does not visit this shrine because Walumbe is for the entire Buganda and the world.

The site was previously under the management of the Department of Museums and Monuments before it was transferred to Buganda Kingdom recently.

To visit the shrine, a local tourist pays Shs2,000, while a foreigners will part with Shs5,000. According to the caretakers, the shrine receives an average 20 tourists a day. The pilgrims are exempted from paying entrance fees.

“All the revenues generated here are sent to Buganda Kingdom’s treasury,” Ddumba says.

The shrine represents such religious places where communication links with the spiritual world are maintained. The shrine, which is also an archaeological site, is a living cultural museum in Buganda Kingdom.

The site is located about 45 kilometres west of Kampala on the Kampala-Mityana Road.

According to the Department of Antiquities and Museums, these are pit shafts on a flat top of Tanda Hill in Mityana District. There are more than 50 pits covering an area of 0.5 hectare (50 acres) but only 12 are clearly visible.

Those clearly visible are symmetrically arranged. Their diameter is roughly 1 metre, while the depths of those which have been measured range from 3 to 12 metres.

From scientific point of view, the pit shafts were excavated for the extraction of iron ore (possibly magnetite), especially when you compare them with those shafts near Butiti, Mwenge County, Kabarole District (now Kyejonjo District), places like Kisururami and Lugombe (Rugombe), which are 296km away on the Kampala-Fort Portal Road.

According to the Department of Antiquities and Museums, the Butiti shafts are similar to those at Tanda by virtue that they are also said to be connected to each other by underground tunnels.

The walls of the Tanda shafts indicate some use of a pick-axe popularly known as nululu in Luganda or emissuma in Runyoro for digging. There are chippings on the walls of the pit shafts, a sign of what was used.

According to the Department of Antiquities and Museums, these pit shafts in Tanda and Butiti were first noticed by E.J. Wayland, then commissioner of geological survey in 1920.

“Iron ore mining had been forgotten long ago and the pits became a mystery to the public. Whatever man does not understand, it becomes divine but still we should not disrespect the traditional legends.”

“Let us see why the pit shafts took that shape. Using the ancient Kahinda or nfuvu method of location of iron ore by the miners (abahesi ba matale) or (abawesi) these shafts were dug. This reddish dung beetle (Kahinda) guided the miners who later on sold the ore to the blacksmiths. The beetle, which is usually found on hills where cattle and goats graze burrows… is a great excavator and soon digs downwards into the earth, throwing up small heaps of soil and gravel…,” the department adds.

“…Another school of thought says the place might have been used for food storage by the inhabitants and that is why it is narrated that Nambi, who was Kintu’s wife, forgot the millet. So Nambi’s myth might have been derived from that,” the department further adds.

BOBI WINE SETS ANOTHER RECORD: AS HIS FEATURED 0N THE TIMES SQUARE BILLBOARD IN NEWYORK.