By Neely Tucker, LIBRARY OF CONGRESS

February 12 is the birthday of Abraham Lincoln, who is routinely voted by historians to be the best — or, at worst, the second-best — president in American history, depending on how George Washington is polling.

The Library has Lincoln’s papers as well as any number of things the president and Mary Todd Lincoln possessed, including the pearl necklace and bracelets that the first lady wore to their first inaugural ball. Log-splitting Abe was a man of such modest means that he had to buy them on layaway from Tiffany’s in New York. Also, one of the most requested things to see in the Library (it’s a single collection) is the contents of his pockets when he was assassinated.

There are also stunning documents in his hand, including the Gettysburg Address, as well as the working drafts and final copies of his memorable inaugural speeches. Both contributed lines that still resonate in the national consciousness. In the second, given during the waning weeks of the Civil War, there was “with malice toward none,” a call towards national healing.

In the first inauguration, some states were already seceding when Lincoln took office. In this speech, trying to hold a fragmenting nation together, he concluded with a passage about the shared bonds of all Americans: “The mystic chords of memory, stretching from every battlefield and patriot grave to every living heart and hearthstone all over this broad land, will yet swell the chorus of the Union, when again touched, as surely they will be, by the better angels of our nature.”

Abraham Lincoln, the sixteenth President of the United States, was born in a single-room log cabin on Sinking Spring Farm in LaRue County, Kentucky on February 12, 1809. He was the son of Thomas Lincoln, an illiterate pioneer farmer, and Nancy Hanks Lincoln, who died when Abraham was nine years old. It was Thomas Lincoln’s second wife, Sarah Bush Johnston who, while illiterate herself, recognized Abraham’s “uncommon natural talents” and encouraged his famous bookishness. 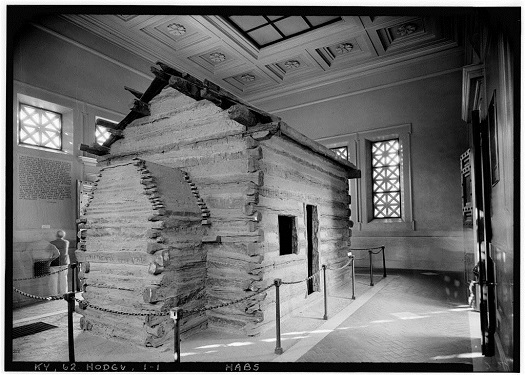 Self-taught and from humble origins, Abraham Lincoln became one of the most revered and uniquely appealing United States Presidents. Known as Honest Abe, the Rail-splitter, and the Great Emancipator, Lincoln was a skilled orator who preserved the Union during the American Civil War and issued the Emancipation Proclamation. His assassination in 1865 contributed to Lincoln’s legendary place in American history and culture.

Despite his stature among many Americans as one of the greatest United States presidents, only a small number of U.S. states, including Connecticut, Illinois, Missouri, and New York, observe Lincoln’s birthday on February 12 as a legal, public holiday. In other states, Lincoln’s birthday is celebrated in combination with President George Washington’s birthday on the third Monday of each February. The combined federal holiday is officially named Washington’s Birthday but is also known as Presidents Day. 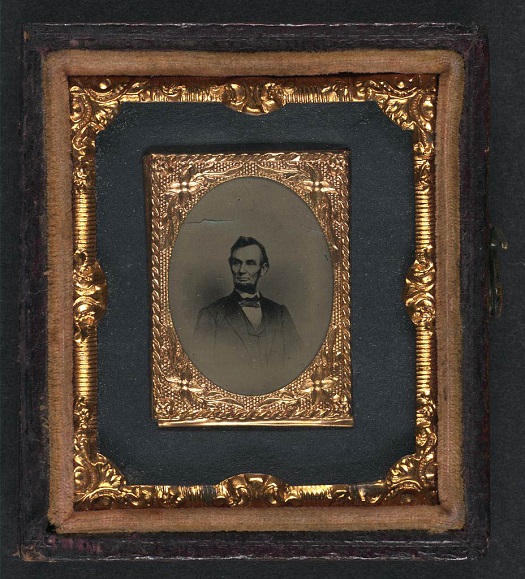 Washington’s Birthday was first declared a federal holiday in 1879 by an Act of Congress. The Uniform Holidays Act of 1968 changed the date of commemoration from Washington’s actual birthday on February 22 to the third Monday of February. Because of this Act, and the fact that President Lincoln’s birthday falls on February 12, many people now refer to the holiday as “Presidents Day” and consider it a day honoring all American presidents. However, neither the Uniform Holidays Act nor any subsequent law changed the name of the holiday from Washington’s Birthday to Presidents Day. 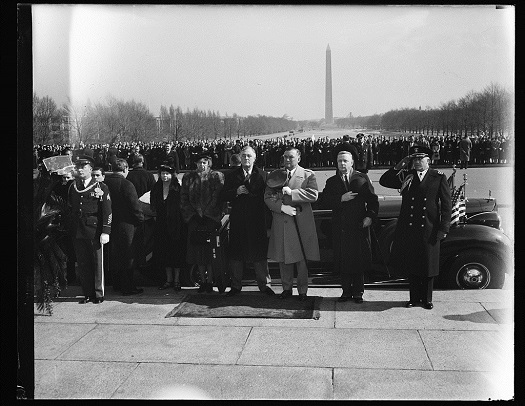 Several Lincoln devotees have attempted to create a holiday in honor of the sixteenth President. In 1873, Julius FrancisExternal, a shopkeeper from Buffalo, New York, proposed a holiday celebrating President Lincoln. Francis, a bachelor and collector of Civil War and Lincoln memorabilia, declared that his campaign for a Lincoln holiday was “my wife and my life.” Francis sent Congress elaborate memorial pamphlets as part of his campaign and organized the first public celebration of Lincoln’s birthday in Buffalo. Until his death in 1881, Francis held annual celebrations of Lincoln’s birthday, renting a hall and organizing speakers, poets, and musicians to celebrate the martyred president. His attempts to persuade Congress to establish a legal Lincoln’s Birthday holiday were not successful, but in 1877 Francis organized the Buffalo Lincoln’s Birthday Association to continue the campaign after his death.

In 1951, Californian Harold Stonebridge Fischer formed a Presidents Day National Committee and lobbied Congress for the creation of a holiday to honor the office of the president rather than a particular president. He proposed March 4, the original Presidential Inauguration Day, as the date for “Presidents Day.” The bill was defeated in the Senate Judiciary Committee, but several state governors subsequently issued proclamations declaring March 4 “Presidents Day” in their states. 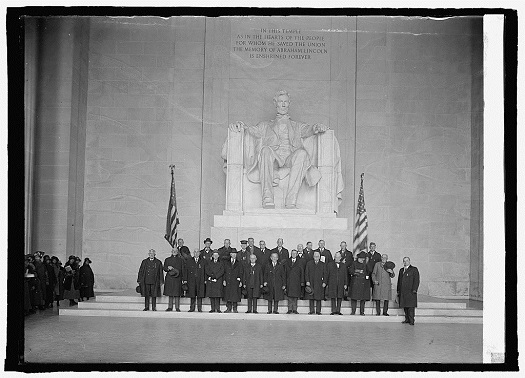 Even in locations where it is not a legal holiday, many groups and individuals celebrate Lincoln’s birthday, and annual wreath-laying ceremonies take place at the Lincoln Memorial in Washington, D.C. and at the Abraham Lincoln Birthplace National Historic Site in Kentucky. The ceremony in Washington has been conducted every year since the dedication of the Lincoln Memorial in 1922. Activities in other locations include re-enactments, parades, concerts, and readings of the Gettysburg Address.

Learn More
The Abraham Lincoln Papers at the Library of Congress include treasures such as Lincoln’s first and second inaugural addresses, his preliminary draft of the Emancipation Proclamation, and the two earliest-known drafts of the Gettysburg Address.
Participate in the Letters to Lincoln transcription challenge and help the Library provide better access to the documents and correspondence found in the Abraham Lincoln Papers held by the Library’s Manuscript Division. One of several transcription campaigns, this effort has been launched by the Library’s new crowdsourcing project, By The People, and offers opportunities to interact with our treasured resources.
The Alfred Whital Stern Collection of Lincolniana includes more than 11,000 items, such as law papers, sheet music, broadsides, prints, cartoons, maps, drawings, letters, campaign tickets and other ephemeral items documenting the life of Abraham Lincoln.
Find more resources about Lincoln through the Library of Congress Abraham Lincoln Resource Guide.
Search Today in History on Abraham Lincoln to learn about more events in his life and presidency occurring on March 4, April 14, September 22, November 2, November 19, and December 3.
Visit the website for the Abraham Lincoln Birthplace National Historical Park in Kentucky.
Search Congress.gov to find Congressional bills to designate Lincoln’s Birthday as a legal public holiday.
Teachers can view Lincoln-related primary source sets and lesson plans through the Library’s Teachers site.
Read a blog post from the Law Library of Congress about Presidents Day and Library collection items related to Abraham Lincoln.
View an online exhibition related to Lincoln’s Gettysburg Address.
Learn more about Abraham Lincoln as Commander in Chief through the online presentation With Malice Toward None: The Abraham Lincoln Bicentennial Exhibition, created for the two-hundredth anniversary of Lincoln’s birth.
Search Chronicling America: Historic American Newspapers to find articles about historical Lincoln’s birthday celebrations.
===

February 12 marks the birth of painter Thomas Moran(1837-1926).* His depictions of Western landscapes inspired Americans to conserve and cherish spectacular wilderness areas as part of their national heritage. 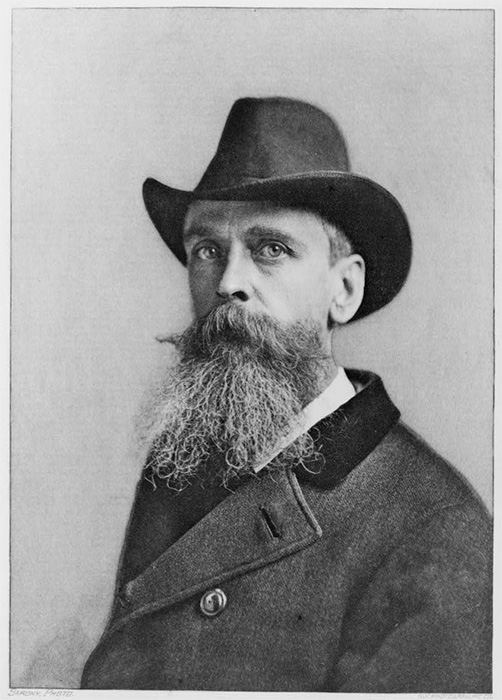 In the summer of 1871, Moran joined the U.S. Geological Survey of the Territories. Headed by Ferdinand V. Hayden, this scientific exploration of lands along the Yellowstone River in northwestern Wyoming and southeastern Montana included a painter and a photographer. Visual documentation not only served to verify textual reports but also stimulated public interest. 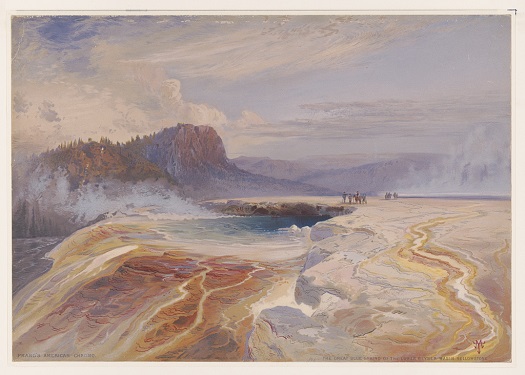 These images helped convince Congress to set aside the Yellowstone area as a national park. Legislation establishing the park took effect March 1, 1872. Congress later purchased two of Moran’s panoramic landscapes to embellish the U.S. Capitol: The Grand Cañon of the Yellowstone (1872) and The Chasm of the Colorado (1873-74). 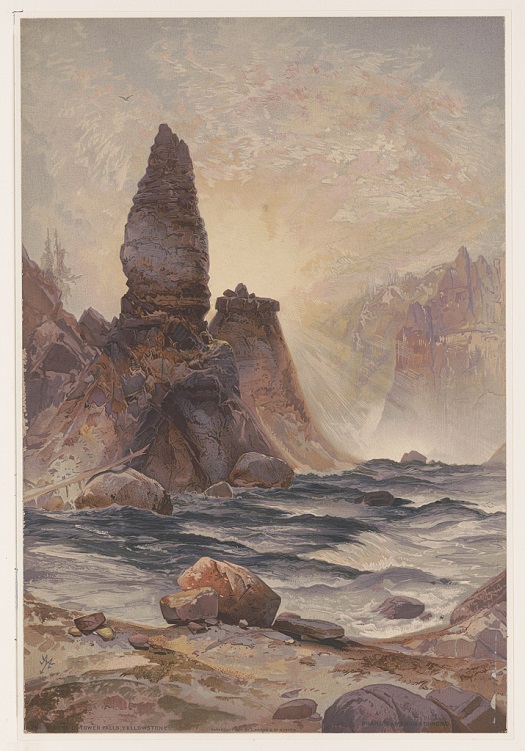 Moran continued to travel and paint in the West. Although Scribner’s, Harper’s Weekly, and other influential magazines published black-and-white engravings of his art, Moran’s paintings of wilderness spectacles attracted the widest acclaim. Beginning in 1874, Thomas “Yellowstone” Moran (as he sometimes signed his name) created a series of watercolors that were published as chromolithographs by L. Prang and Company in 1876. Louis Prang was a pioneer in the full-color reproduction of American art; his chromolithographs of Moran’s paintings added a new dimension to public appreciation of Western scenic beauty.

Moran was less interested in exactly replicating the marvels of nature than in capturing their overall impression on the human spirit. In this, he was deeply influenced by the British painter J.M.W. Turner, whose works he copied and studied in his youth; and by Turner’s champion, the British critic John Ruskin, who expressed admiration for Moran’s art. 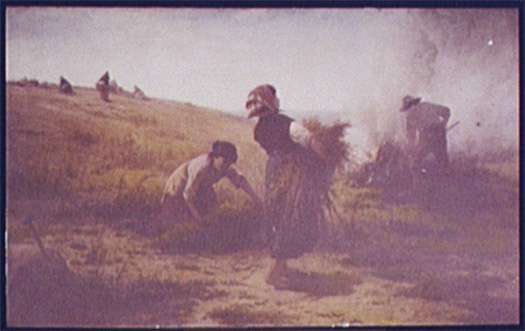 Two of Moran’s brothers also were painters. Edward, known mostly for his maritime paintings, was Thomas’s principal mentor. This photograph of a painting relies on yellow and brown hues similar to those in Thomas Moran’s Western landscapes.

Learn More
View additional chromolithographs of the artist’s work. Search the collection The Evolution of the Conservation Movement, 1850-1920 on Moran. Search on Hayden or Jackson to examine photographs from the U.S. Geological Survey of the Territories.
See the Documentary Chronology of Selected Events in the Development of the American Conservation Movement, 1847-1920 for an overview of the U.S. conservation movement. To learn more about the United States Geological Survey of the Territories, see the year 1871.
Explore the Yellowstone maps in the collection Mapping the National Parks to find out more about the Hayden Expedition and the establishment of the world’s first national park.
Read Today in History features on John Muir, Henry David Thoreau, Frederick Law Olmsted, the Yosemite Land Grant, and Earth Day for additional insight into the history of American conservation efforts.
Catch a glimpse of nineteenth-century tourism. Early films Tourists Going Round Yellowstone Park (1899) and Coaches Arriving at Mammoth Hot Springs (1899) are available for viewing through Inventing Entertainment: The Motion Pictures and Sound Recordings of the Edison Companies.
Visit the National Park Service online exhibit American Visionaries: Thomas Moran, part of a series highlighting the lives of Americans who contributed to the life, culture, and history of the United States; the National Gallery of Art provides biographical and other information on Thomas Moran.

As Trump Is Impeached a Second Time, Americans Share a Sense of Alarm

UGANDA: I woke up in Australia

UGANDA: What if Museveni opts to bring Gen. Saleh as successor