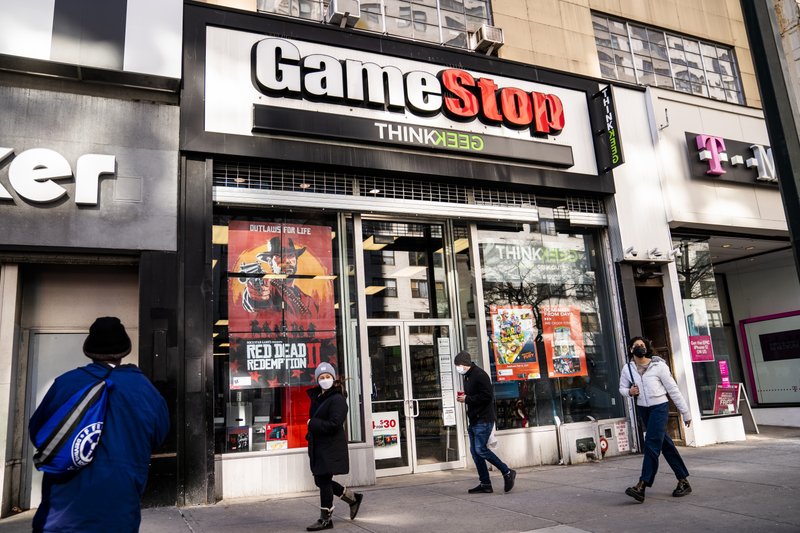 WASHINGTON (AP) — Key players in the GameStop saga are testifying to a House committee Thursday. Lawmakers are examining whether the wild swings in the stock price of the video game retailer exposed conflicts in the market’s structure that can hurt unsophisticated investors.

The episode has been portrayed as a victory of the little guy over Wall Street titans, but not everyone is buying it. Lawmakers from both parties are among the skeptics.

GameStop shares soared 1,600% in January before falling back to Earth. The drama entangled huge short-selling hedge funds, a social media message board and ordinary investors wanting in on the hottest new trade.

The head of the Financial Services Committee, Rep. Maxine Waters, D-Calif., opened the hearing by saying the GameStop drama “has put a maximum spotlight on institutional practices by Wall Street firms,” and potential conflicts of interest.

“Many Americans feel that the system is stacked against them and no matter what Wall Street always wins.”

Among those testifying remotely for the hearing being held by the House Financial Services Committee are Vlad Tenev, CEO of Robinhood, which operates an online trading platform that is popular with individual investors. In his prepared testimony, Tenev defended Robinhood against allegations that trading restrictions it put in place disadvantaged those smaller investors in favor of bigger institutional clients.

Also appearing is Keith Gill, who earned a handsome profit and a legion of online followers for making the case for GameStop shares on Reddit and YouTube long before the big surge in the price in January. Gill, known as Roaring Kitty on YouTube, is known for his cat-themed T-shirts and a bright red runner’s headband in widely followed videos.

With short-selling, investors bet a stock’s price will drop. Defenders of the practice say it’s a tool for uncovering a stock’s true value and hedging against possible losses.

“Any allegation that Robinhood acted to help hedge funds or other special interests to the detriment of our customers is absolutely false and market-distorting rhetoric,” Tenev says in written testimony prepared for the hearing. “Our customers are our top priority.”

As they question Tenev and other witnesses, lawmakers will look to see if there was manipulation of any kind in the GameStop trading frenzy or other conflicts that put smaller investors at a disadvantage.

“We don’t know whether it will just be warnings versus actual findings in terms of (stock) manipulation. That’s going to take time,” Quincy Krosby, chief market strategist at Prudential Financial, said in an interview Wednesday. “It’s clear the concern is there. We’ll see how the (Biden) administration handles this.”

Gill plans to tell the lawmakers that he reaped a profit on his investment because he did his homework, and not because he touted the stock to “unwitting investors,” according to his prepared remarks.

“I did not solicit anyone to buy or sell the stock for my own profit,” Gill says. “I had no information about GameStop except what was public.”

Also expected to testify is Ken Griffin, the CEO of Citadel, one of the biggest hedge funds.

Hedge funds, which cater to the uber-rich, command trillions in assets are are known by their penchant for risk and prolific use of short-selling. Griffin is politically influential and has been a heavy donor to Republican politicians.

Chicago-based Citadel stepped in with a few other funds to rescue Melvin Capital Management after it sustained billions in losses on its GameStop bets. Gabriel Plotkin, Melvin Capital’s founder and chief investment officer, also is scheduled to appear for the hearing.

Steve Huffman, the CEO and co-founder of Reddit, says that its WallStreetBets forum at the heart of the GameStop drama “is first and foremost a real community.”

“We saw the power of community in general and of this community in particular when the traders of WallStreetBets banded together at first to seize an investment opportunity not usually accessible to retail investors, but later more broadly to defend all retail investors against the criticism of the financial establishment,” Huffman said in written testimony.

As the frenzy escalated, the acting head of the Securities and Exchange Commission said the agency is examining the trading restrictions imposed by Robinhood and other online brokerages as well as possible stock manipulation, and the role that short-selling may have played in GameStop’s extreme price swings.

The small investors were seen as the winners after they mobilized against Wall Street heavies on the subreddit. Their buying swelled the share prices of GameStop and other beaten-down companies beyond anyone’s imagination. Not coincidentally, it inflicted billions in losses on the hedge funds that had placed bets that the stocks would drop.
Full Coverage: Business

The populist traders’ strategy was risky. GameStop stock plunged 60%, to $90 on Feb. 2, wiping out hundreds of thousands of dollars in a few hours. The stock dropped another 42%, to $53, on Feb. 4 and currently trades around $44, still more than double their value at the start of the year.

India prepares to hang woman for first time since independence; killed 7 family members with an axe

What we see in a flag or a noose or a black racer is telling. We can do better.