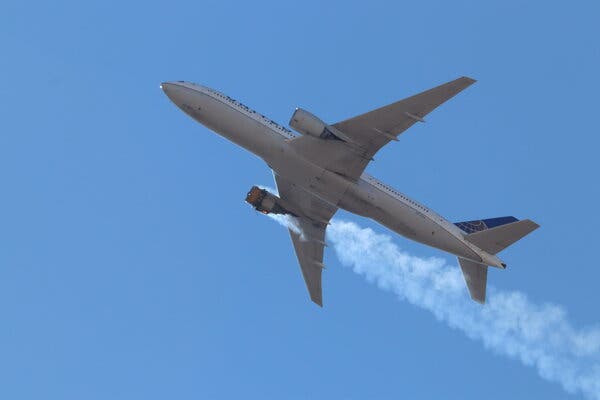 The United Airlines Boeing 777 with its right engine on fire on Saturday outside Denver.Credit…Hayden Smith/EPA, via Shutterstock

The company said 128 jets powered by a particular Pratt & Whitney engine should get inspections.

Boeing said on Sunday that all 128 of its 777 jetliners powered by a particular Pratt & Whitney engine model should be grounded worldwide until the Federal Aviation Administration determines the best way to inspect the engines.

The aerospace giant issued its recommendation late Sunday, a day after a 777 operated by United Airlines suffered a dramatic engine failure over Colorado and hours after the head of the F.A.A. said he was requiring “immediate or stepped-up inspections” of planes equipped with the Pratt & Whitney PW4000 family of engines, which are used only on 777s. The vast majority of Boeing 777s are equipped with engines made by GE Aviation.

United, which is the only American carrier affected by the F.A.A. order, said it would temporarily ground the two dozen 777s powered by that Pratt & Whitney model that it had been flying. The National Transportation Safety Board is leading an investigation into the crash.

“While the N.T.S.B. investigation is ongoing, we recommended suspending operations of the 69 in-service and 59 in-storage 777s powered by Pratt & Whitney 4000-112 engines until the F.A.A. identifies the appropriate inspection protocol,” Boeing said in a statement.

Earlier on Sunday, the F.A.A.’s counterpart in Japan had ordered airlines there to stop flying 777s equipped with those engines, affecting 32 jets operated by All Nippon Airways and Japan Airlines, a move that Boeing said it supported. The only other country with carriers that fly that plane-and-engine combination is South Korea, according to the F.A.A.

“We reviewed all available safety data following yesterday’s incident,” the agency’s administrator, Steve Dickson, said in a statement on Sunday. “Based on the initial information, we concluded that the inspection interval should be stepped up for the hollow fan blades that are unique to this model of engine.”

Mr. Dickson said the F.A.A. was working with its counterparts around the world and said its safety experts were meeting “into the evening” with Pratt & Whitney and Boeing to address the required inspections. Pratt & Whitney, a division of the aerospace and military giant Raytheon Technologies that makes jet and helicopter engines, did not immediately respond to requests seeking comment.

Soon after United Flight 328 departed Denver for Hawaii on Saturday, the right engine failed, shedding debris across three neighborhoods before the plane returned safely to Denver, according to the authorities. None of the 229 passengers or 10 crew members were injured.

The National Transportation Safety Board said on Sunday that an initial investigation showed that two fan blades in the plane’s Pratt & Whitney PW4077 engine had fractured and that the cowling, or covering, had separated from the engine. Investigators are examining the engine and airplane as well as photographs and video taken by passengers. The cockpit voice recorder and flight data recorder were taken to Washington for analysis. 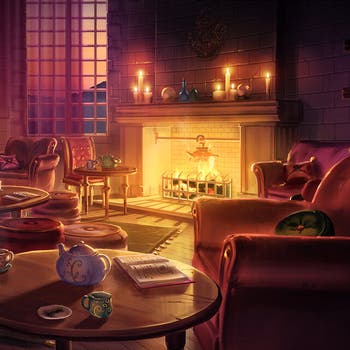 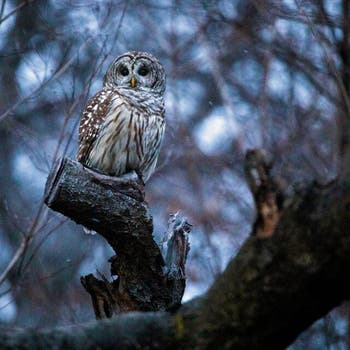 United said in a statement that “safety remains our highest priority — for our employees and our customers.” In addition to the two dozen planes it was grounding, United said it had 28 more Boeing 777s equipped with the engine model in storage.

While the American and Japanese orders affect relatively few planes, they represent yet another blow to Boeing, which is suffering from two recent major crises: the 18-month global ban of the 737 Max following two fatal crashes and a slowdown in worldwide travel caused by the coronavirus pandemic. The F.A.A. in November became the first global aviation authority to lift its ban on the Max, and its counterparts in several other jurisdictions have since followed suit.

The 777 is a large, twin-aisle plane typically used to fly long distances. Its first passenger flight, operated by United, was in 1995. So far, Boeing has delivered more than 1,600 of the jets to customers around the world, roughly 200 of which are freighters. Only 174 of the 1,600 jets were equipped with Pratt & Whitney engines, the last of which was delivered to the South Korean carrier Asiana Airlines in 2013. More than 1,250 of the jets were equipped with engines made by GE Aviation, with the remaining using engines made by Rolls-Royce.

In recent years, airlines have increasingly favored smaller, single-aisle planes, a trend accelerated by the pandemic, throughout which few people have been flying internationally.

“We have ordered that operation of the planes be stopped while we consider the necessity of additional measures,” the Japanese Ministry of Land, Infrastructure Transport and Tourism wrote in an announcement on its website.

In the statement, the ministry said it had ordered the airlines to increase engine inspections after a “serious incident” on Dec. 4 involving a 777 with a Pratt & Whitney engine. Soon after departing from Naha airport in Okinawa that day, Japan Airlines Flight 904 turned around because of a problem with its left engine, according to the ministry. A subsequent investigation by the ministry discovered damage to the engine’s fan blades and cowling.

In late January, the ministry concluded that the episode was caused by metal fatigue in the fan blades and issued an order for domestic airlines to step up inspections of similarly built engines. The engine on that Dec. 4 flight was a Pratt and Whitney PW4074.

A spokesman for Japan Airlines said the airline had decided on Sunday — before the aviation authority issued its order — to stop using the 13 Boeing 777s in its fleet equipped with the Pratt & Whitney engines. Only three scheduled flights were affected. The airline last year said it planned to remove all 13 planes from its fleet by early 2022. The airline also operates 22 Boeing 777s equipped with engines from GE Aviation, which are unaffected by the order.

All Nippon Airways said it had 19 jets in its fleet involved in the order, affecting two scheduled flights. Korean Air has 16 777s with the Pratt & Whitney engines, with six currently in use, the airline said.

NTVUganda has added PWJK: Making music from the scars video