Sissieretta Jones sang for kings, presidents, and to audiences around the world, becoming the highest paid African-American entertainer of the late 19th century. She headlined at Carnegie Hall and was hailed as one of the greatest sopranos of her time, yet she never performed on the operatic stage. 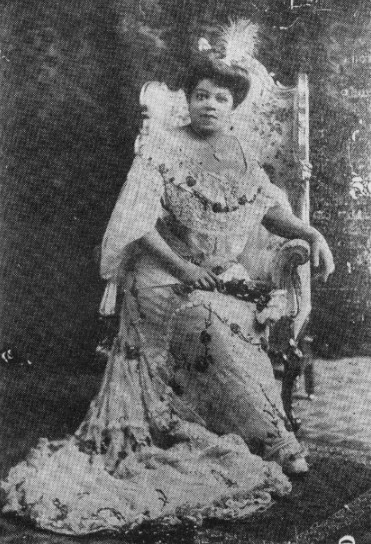 She was born Matilda Sissieretta Joyner in Portsmouth, Virginia in 1868, the daughter of former slaves. A self-taught musical prodigy as a child, she received no formal training until she was a teenager after her family had relocated to Providence, Rhode Island.

At age fifteen, she studied under noted Italian diva, Ada Baroness Lacombe, at the Providence Academy of Music, then later at the Boston Conservatory of Music. Soon after starting her training, Sissieretta met and married David Richard Jones, who would act as her manager early in her career.

In the spring of 1888, Jones participated in a series of concerts throughout New England, as well as in Manhattan, Brooklyn, and Philadelphia. It is believed that a glowing review in the New York Clipper was the first to dub her as the “Black Patti,” a comparison to Adelina Patti, a renowned Italian opera singer at that time. It was a pseudonym that she would come to be known by throughout her career, although she preferred to be called “Madame Sissieretta Jones.”

It was at one these concerts that she was heard by an agent from the same management company that led the Metropolitan Opera. Jones contracted with the agency to join the Tennessee Jubilee Singers for a two-year tour of the West Indiesand South America, where she was billed as the prima donna of the company. The troupe received rave reviews and Jones, in particular, was recognized as a standout. “Mdme. Jones, is the possessor of a pure and beautiful Soprano. Her range of voice is as remarkable as it is even, and her enunciation and method display the most careful cultivation,” Daily Gleaner (Kingston, Jamaica), August 13, 1888, p. 2. 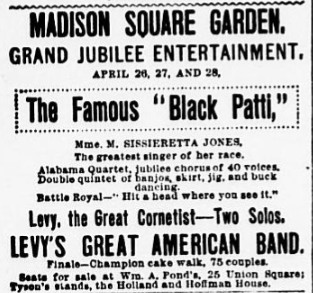 After returning to the United States, President Benjamin Harrison invited her to perform at the White House in 1892, the first of four invitations she would receive from a U.S. President during her career. That same year, Jones headlined at the Grand Negro Jubilee held at Madison Square Garden. Following that successful appearance, she was booked to perform at major expositions in cities such as Chicago, Buffalo, and Pittsburgh. She took a break between appearances to travel to New York to perform at Carnegie Hall, becoming the first African-American woman to perform there in 1893.

Within the next two years, Jones set sail for a nine-month European tour, which included performances attended by royalty. Albert Edward, the Prince of Wales and future King Edward VII of England, was in the audience at her London debut. Germany’s emperor, Wilhelm II, was among the notables who saw her perform in Berlin. It was reported that the emperor had a diamond cross made especially for her as a show of appreciation for her vocal talent.

By 1896, however, Jones abandoned her career as a soloist to become the lead singer of Black Patti’s Troubadours, a vaudeville company organized under white management. Racial prejudice of the time barred her and other black entertainers from performing with established American opera companies. The vaudeville stage was essentially the only forum that allowed Jones to work as professional opera singer. In an interview with the San Francisco Call, a reporter suggested that clever makeup and wigs might get her to be accepted at a white opera company, to which Jones balked, “Try to hide my race and deny my own people? I would never do that.“ She remained with the Troubadours until it disbanded in 1915, making several global tours with the group. 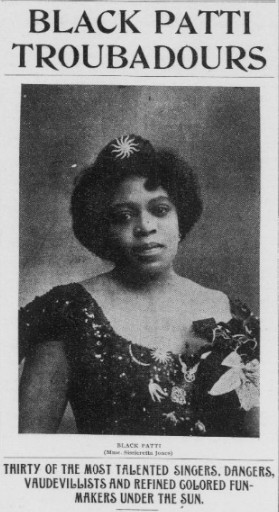 After entertaining worldwide audiences with her musical talents for nearly three decades, Sissieretta Jones retired to her home in Providence in 1916, where she eventually died in 1933. Although she is relatively overlooked today, her life and career as one of the most famous sopranos was an enormous achievement, particularly for an African-American woman in the late 19th and early 20th centuries.