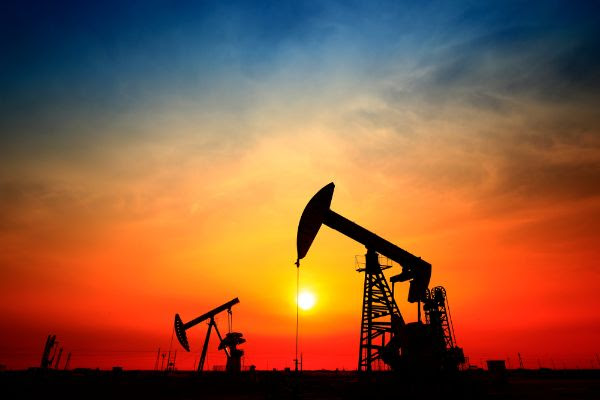 Oil Prices Up On Trade Optimism

Oil is set to close out another week of gains, this time juiced by optimism over the U.S.-China trade negotiations. But the gains are also coming because OPEC+ is taking supply off of the market. “Saudi Arabia is delivering on the cuts it pledged, and I have no doubt they’ll deliver on pledges to do more,” said Bjarne Schieldrop, Oslo-based chief commodities analyst at SEB AB. “It was a production boost from OPEC and an equity sell-off that pushed oil down during the fourth quarter, and now as both of those elements are in reverse prices are going up.”

U.S. shale production to grow by 84,000 bpd in March. U.S. shale production isexpected to grow by 84,000 bpd in March, according to the EIA, marking another month of strong increases. The gains will be led by the Permian (+43,000 bpd), followed by smaller contributions from the Niobrara (+16,000 bpd), the Bakken (+13,000 bpd), the Eagle Ford (+9,000 bpd) and Appalachia (+3,000 bpd). The number of drilled but uncompleted wells (DUCs) rose to 8,798 in January, a 2.4 percent increase from December. Meanwhile, weekly EIA data suggest that total U.S. production surpassed 12 million barrels per day last week, another record high.

Trump could let trade deadline slide. Press reports suggest that the U.S. and China are making progress on trade negotiations, and President Trump has indicated he would be willing to let the talks continue past the March 1 deadline if progress was significant. Trump is expected to meet with China’s vice premier and top trade negotiator on Friday. There are still thorny issues that will be difficult to solve, but markets are welcoming the potential breakthrough in trade talks.

Oil and gas M&A activity to slow. U.S. upstream M&A activity is set to slow this year, after dipping in 2018 compared to the year before. Last year, the number of deals declined to 93, compared to 125 in 2017, according to PwC. Deals in the U.S. shale industry fell from 106 in 2017 to 85 in 2018, although the value of the deals ballooned from $67 billion to $90 billion. Despite the expected slowdown, consolidation will continue, with smaller players selling out to larger ones as the industry pushes for scale. “The rationale for consolidation has never been higher,” Wells Fargo Securities managing director David Humphreys told Argus Media. “Scale is the key.”

Canadian oil titans warn of squandered opportunity. Royal Bank of Canada CEO Dave McKay said this week that Canadian oil companies, pipeline companies and banks need to make the case for more pipelines in order to provide enough political cover for politicians. “They need the support of the business community to take the political risk to move forward with this agenda,” McKay said, according to the Financial Post. Enbridge (NYSE: ENB) CEO Al Monaco warned about the exit of international investment from Canada because of a lack of pipelines and political uncertainty. “We’re squandering an opportunity here to really drive our economy and supply energy in the most sustainable way,” he said.

Glencore’s coal exit pushed by investors controlling $32 trillion. Glencore (LON: GLEN) announced that it would cap its coal production going forward, an announcement that sent shockwaves through the global market for coal. As the largest coal exporter in the world, the move highlights the coming decline for the coal industry. The announcement was likely influenced by Climate Action 100+, a network of 300 shareholders in control of $32 trillion worth of assets. As Bloomberg reports, the group has already forced concessions from BP (NYSE: BP) and Royal Dutch Shell (NYSE: RDS.A).

Oil FIDs to triple in South America. The pace of FIDs for new oil and gas projects in Latin America is set to soar this year. “16 fields are up for final investment decisions (FIDs) in 2019, more than a tripling from the year before,” Rystad Energy said in areport. “With expectations of eight projects of over 25 million boe reaching FID this year, Brazil will be the key driver behind the numbers for South America.” Brazil is expected to see 10 projects receive FIDs.

Eastern Libyan forces take control of El Feel oil field. The Libyan National Army, controlled by Khalifa Haftar, reportedly took control of another oil field in Libya, the El Feel. Reuters said that production of the 75,000-bpd field was not affected. This comes after the LNA seized the largest field, the Sharara, last week.

How Long Can This Commodity Rally Last?
The key numbers in energy markets this week. 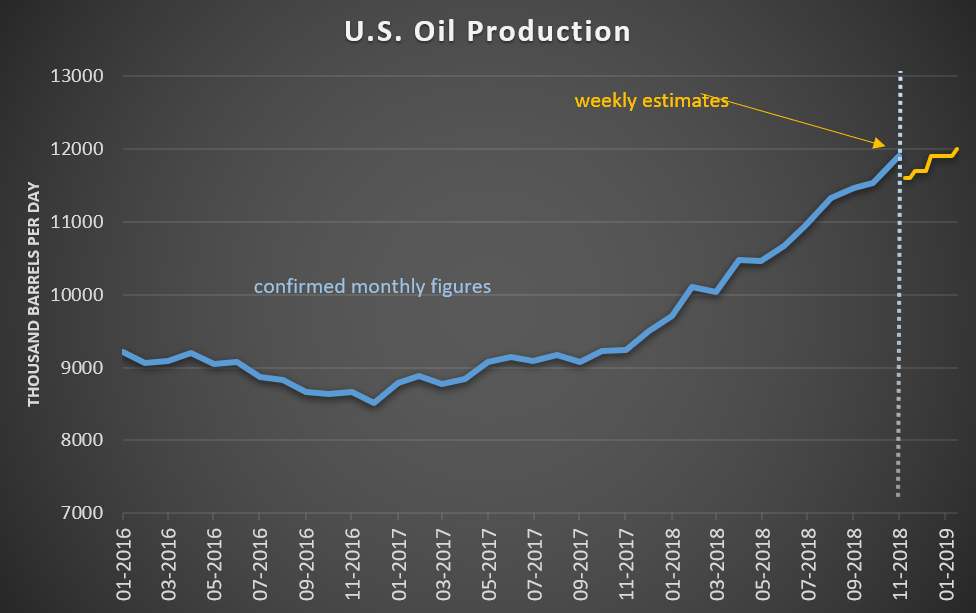 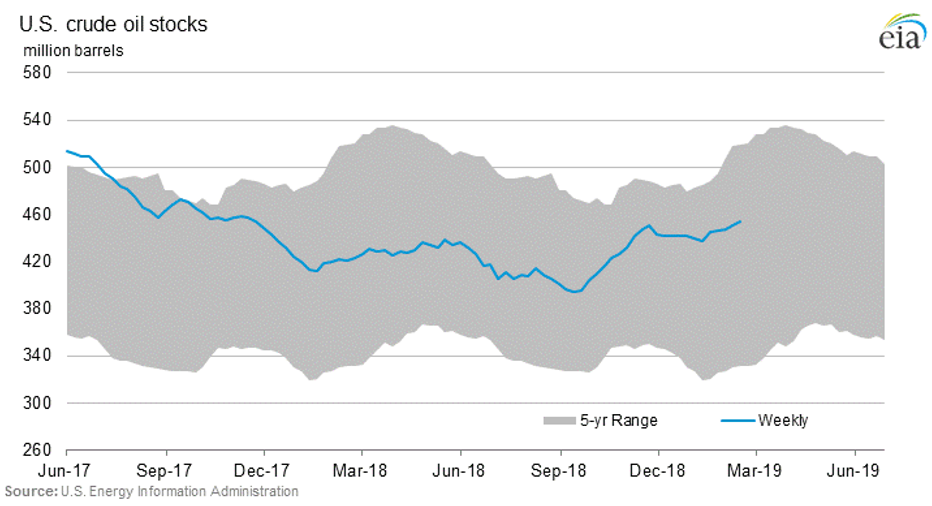 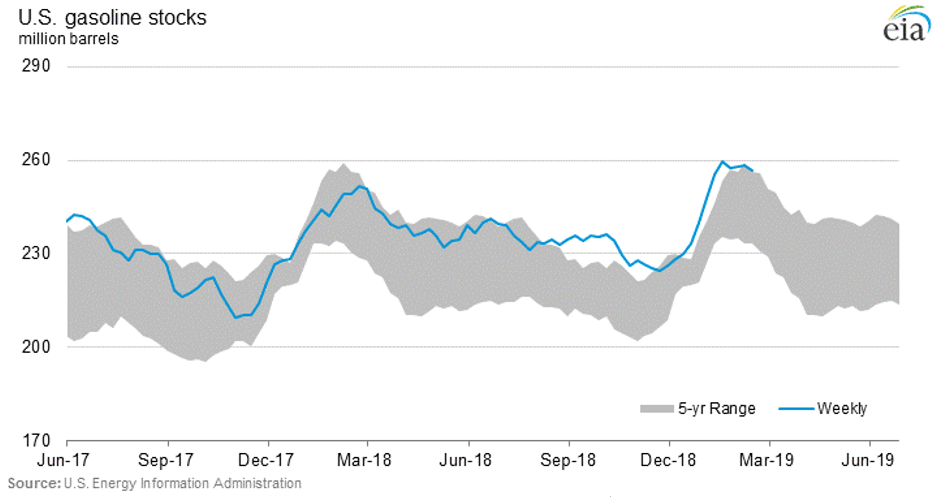 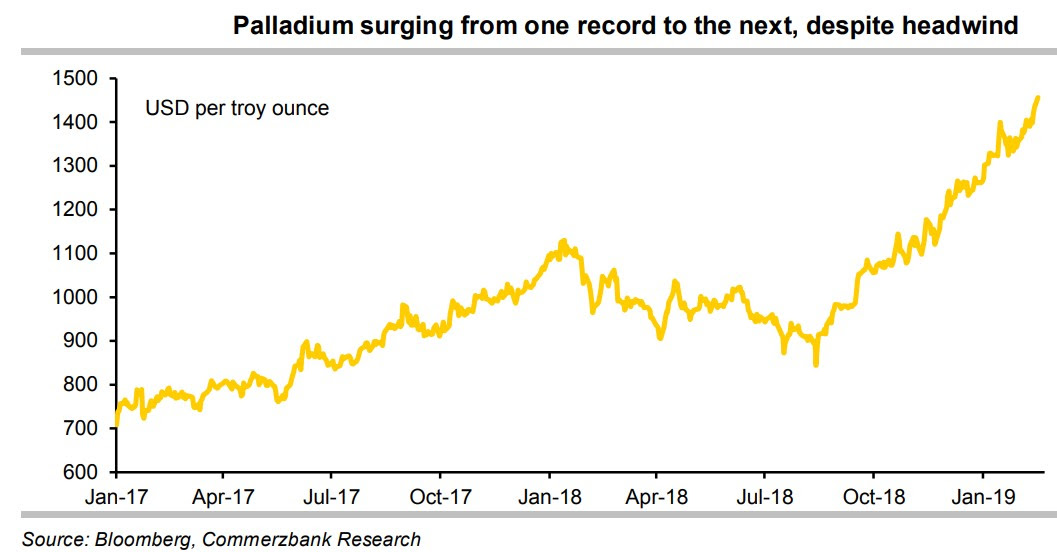 – Palladium surged above $1,500 per ounce this week, smashing records.
– Soaring prices are the result of a shortage. Palladium is used in vehicles to help with emissions controls.
– Prices for Palladium have tripled since 2016. Citigroup says that more price increases could be on the way because of supply shortages, and prices will only be held in check by a demand shock. Citi sees prices going up to $1,600. A supply shortage for Palladium is outweighing slower global auto sales.
– Palladium is produced mostly in Russia and South Africa.
– “Until you get an increase in supply coming onstream, which isn’t going to happen for a few years yet, this is going to result in a tight market and prices generally trending higher,” Philip Klapwijk, managing director of Precious Metals Insights Ltd., toldBloomberg.
– Not everyone agrees. Commerzbank said that prices are rising despite bearish forces, citing slower car sales in China. “We no longer understand the price response,” the bank said in a report this week. “That said, it is impossible to say when the correction – which we believe is long overdue – will ensue.” 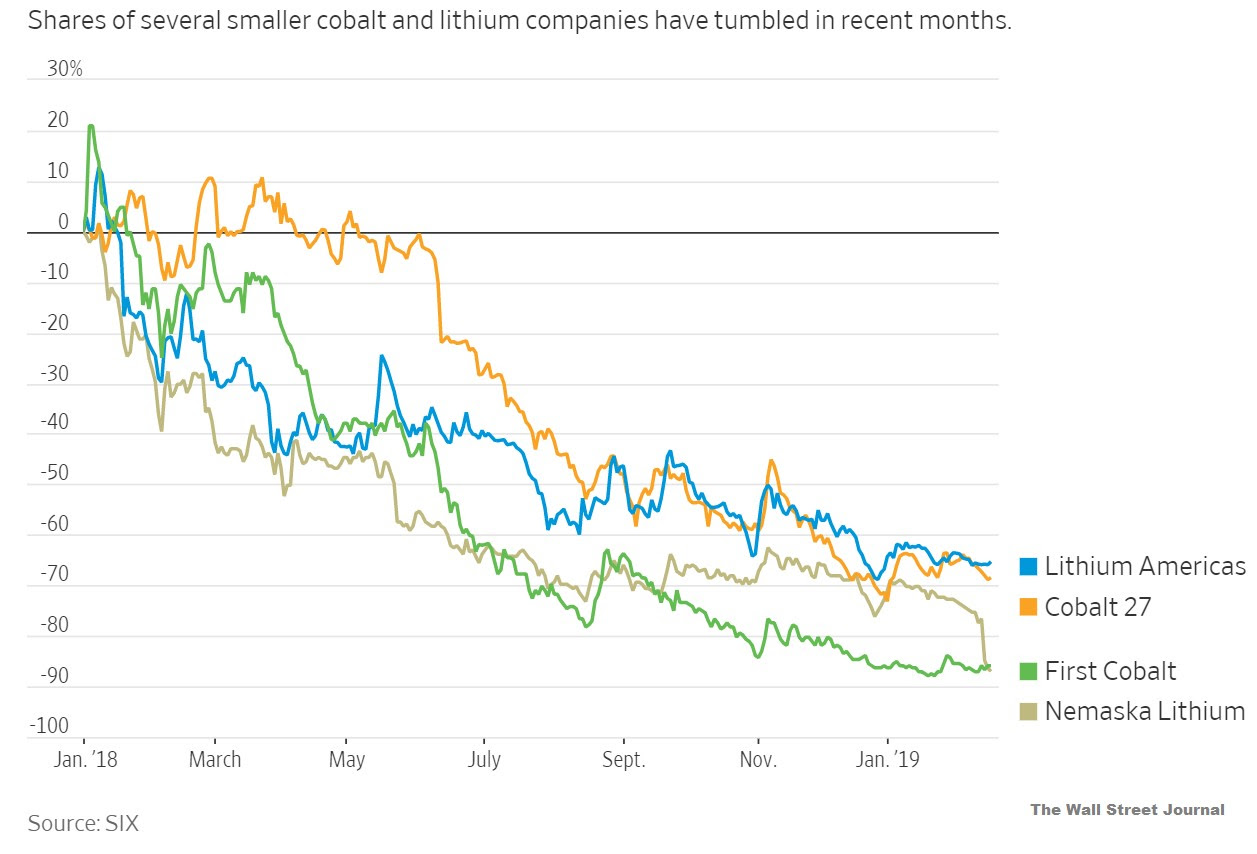 – The bull run for a series of metals needed to build the batteries used in electric vehicles came to an end last year, and the slide has continued in 2019.
– Prices for lithium, cobalt and nickel, among other critical metals, soared in recent years, setting off a scramble for new mines and raising fears of a supply shortage.
– But a surge of new supply has led to a crash in prices. That has crushed the stocks of several metals suppliers. First Cobalt (CVE: FCC) is down more than 80 percent and Lithium Americas (NYSE: LAC) is off by almost half.
– Cobalt prices have declined by 30 percent so far in 2019 alone, according to theWall Street Journal. Lithium prices also continue to slide, declining for ten consecutive months to date.
– The losses come even as global EV sales soared by 64 percent in 2018. 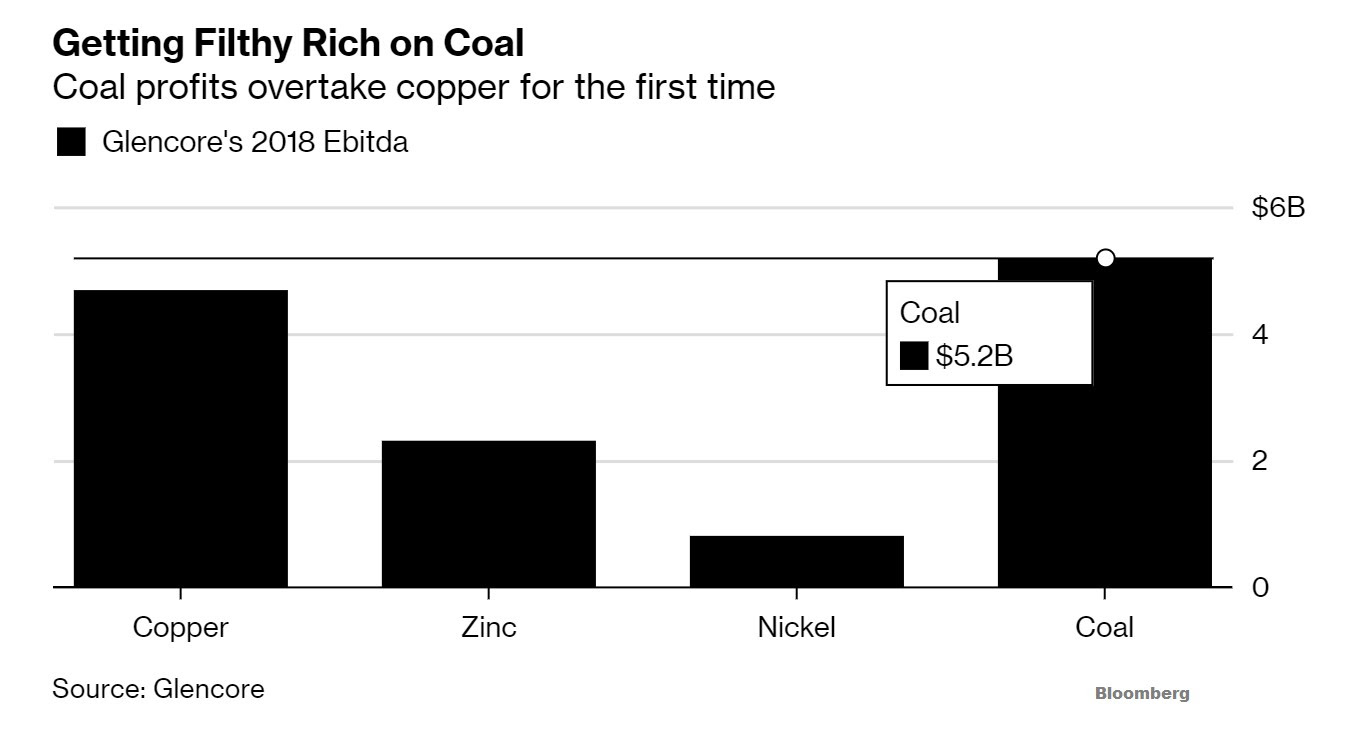 – In the face of investor pressure to address climate change, Glencore (LON: GLEN)announced this week that it planned to cap its coal production at 150 million tonnes per year, roughly its planned production level for 2019. New capacity expansion plans are now off of the table.
– The announcement is a devastating one for the global coal market. Glencore is the largest exporter of coal in the world. Coal was also immensely profitable for the miner, taking in more than $5 billion last year.
– Glencore will use the proceeds of coal sales going forward to invest in metals needed for the energy transition, such as copper, cobalt and nickel.
– The flip side is that by capping production, Glencore alone could tighten up coal supplies, boosting prices over time. It’s not unlike the strategy that OPEC takes when cutting production.
– Glencore alone controlled 25 percent of seaborne coal trade last year. 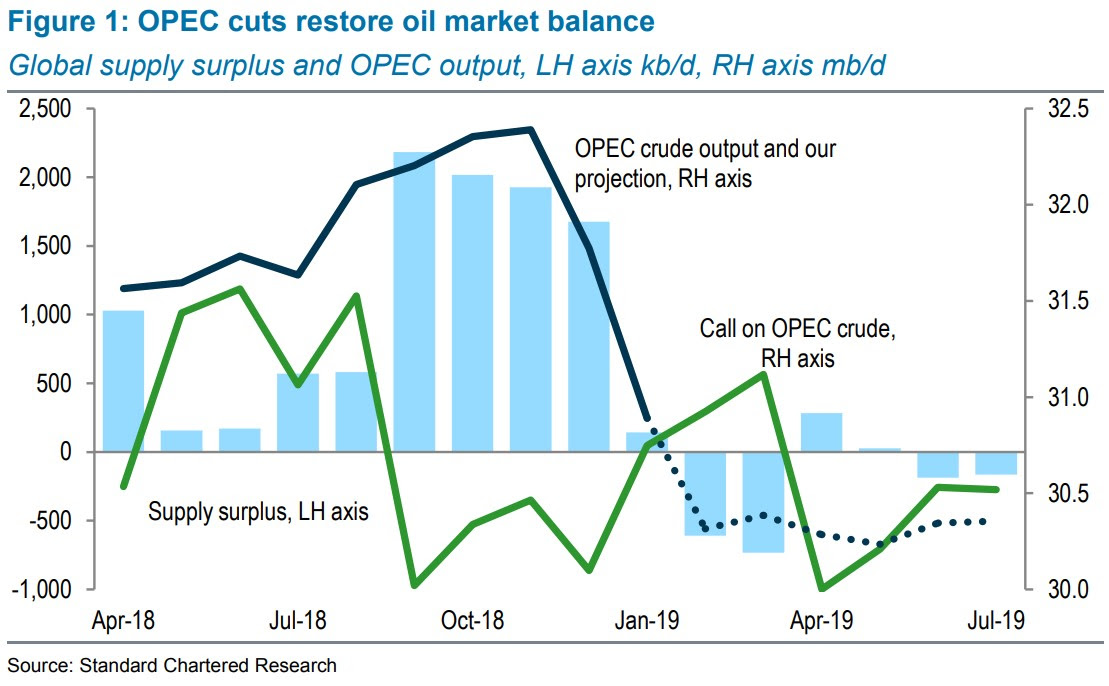 – OPEC produced around 30.8 million barrels per day in January, down 880,000 bpd from a month earlier and down 1.5 mb/d from a November peak, according to Standard Chartered.
– Saudi Arabia has pledged to cut another 0.5 mb/d by March.
– That alone should be enough to eliminate the surplus. “We forecast that the oil market will move into a deficit of over 500kb/d in February and March, with the call on OPEC crude rising while output falls,” Standard Chartered concluded.
– Standard Chartered sees Brent prices moving back to $70 per barrel in the relatively near future. 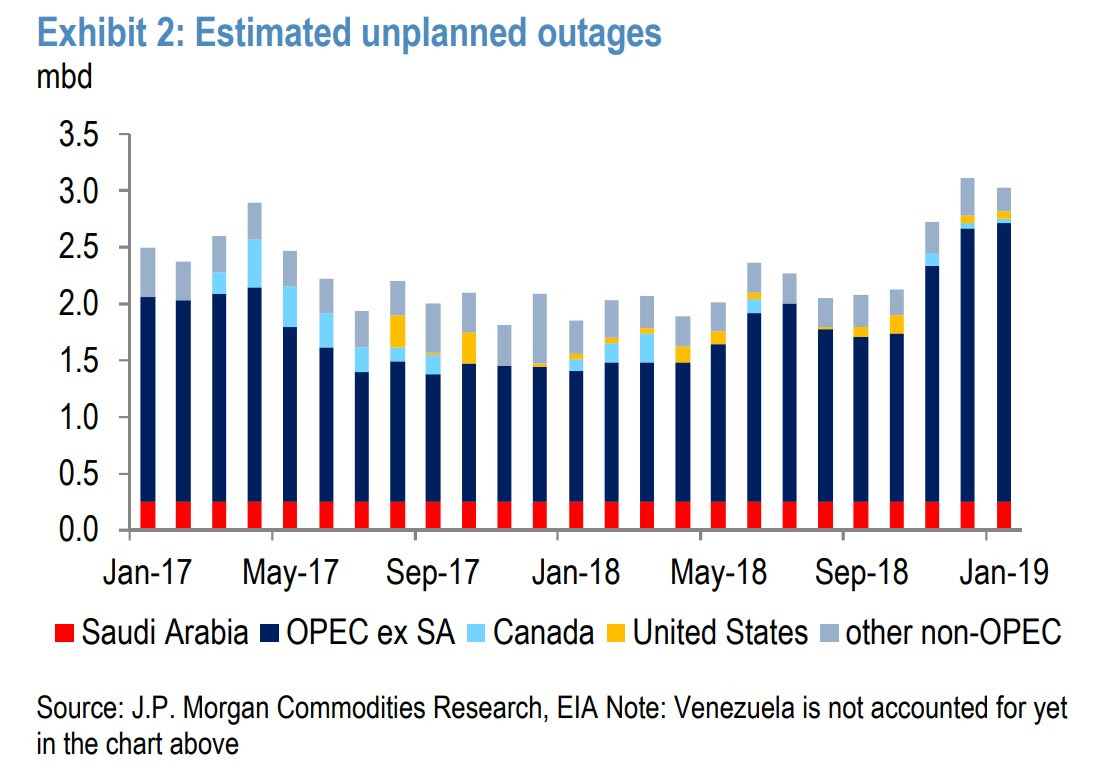 – Not only are the OPEC+ cuts slated to erase the supply surplus, but a series of unplanned outages are also tightening the oil market.
– Libya, Nigeria, Venezuela and Iran have all seen unscheduled outages. Canada cut production to rescue prices in the face of midstream bottlenecks. The volume of unexpected supply disruptions is arguably at its highest rate in years.
– “Angola and Mexico continue to over-comply due to lack of investments causing natural decline,” JP Morgan added in a report.
– In the chart above, the fine print notes that these figures do not even include the unfolding declines in Venezuela, nor do they include the likely disruptions from Iran later this year.
– JP Morgan argues that the markets are “not pricing in the risk premiums associated with such events fairly.” 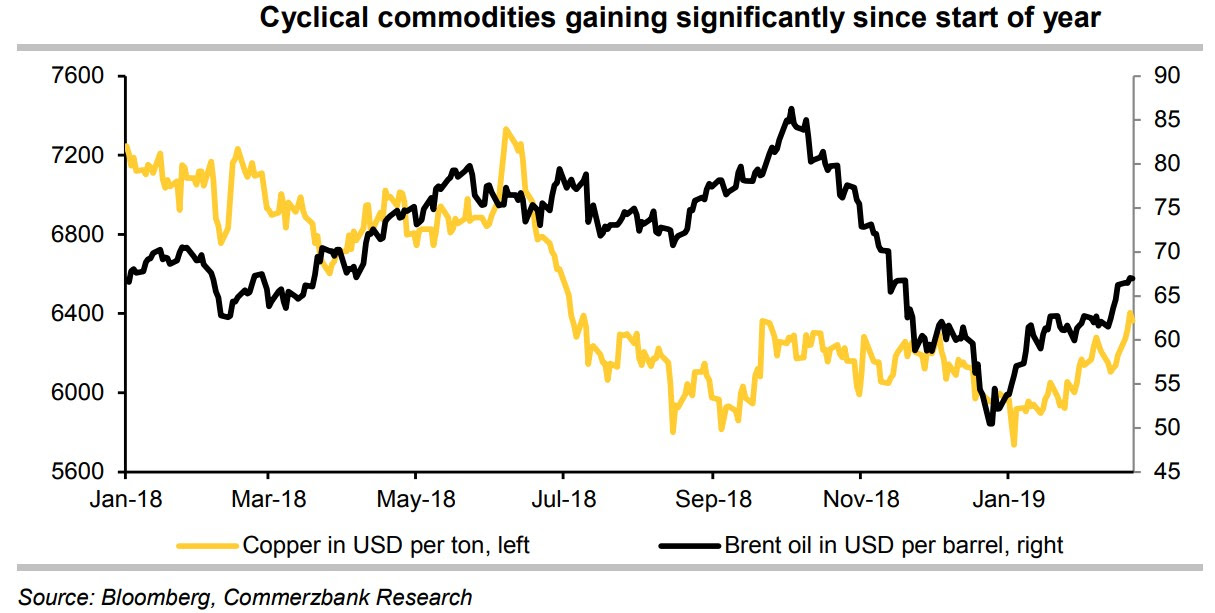 – Copper prices hit a seven-month high this week, rising above $6,400 for the first time since last summer.
– “We believe that a generally benign market environment and technical buying have been boosting the price rise,” Commerzbank wrote in a note.
– At the same time, optimism is rising that the U.S. and China will reach a trade deal, or at least postpone possible tariffs.
– That has boosted sentiment in commodities, including copper and crude oil.
– The Fed’s course reversal a few weeks ago, putting off more rate hikes, has also been a tailwind for commodities this year.

– U.S. solar installations grew by 6 percent in 2018 to 11.7 gigawatts. That came despite U.S. tariffs on imported Chinese solar panels, not to mention the broader trade war with China.
– Solar installations outpaced wind (7.5 GW) for the fifth year in a row.
– Corporate-led renewable energy installations is a growing trend, as opposed to more traditional utility-scale projects, according to PV Magazine.
– Corporate buyers accounted for 8.6 GW of new wind and solar last year, more than twice the previous record of 3.4 GE in 2015, PV Magazine found.

Bob Marley - Redemption Song (from the legend album, with lyrics)