This is a guest post by American Folklife Center archivist Maya Lerman. 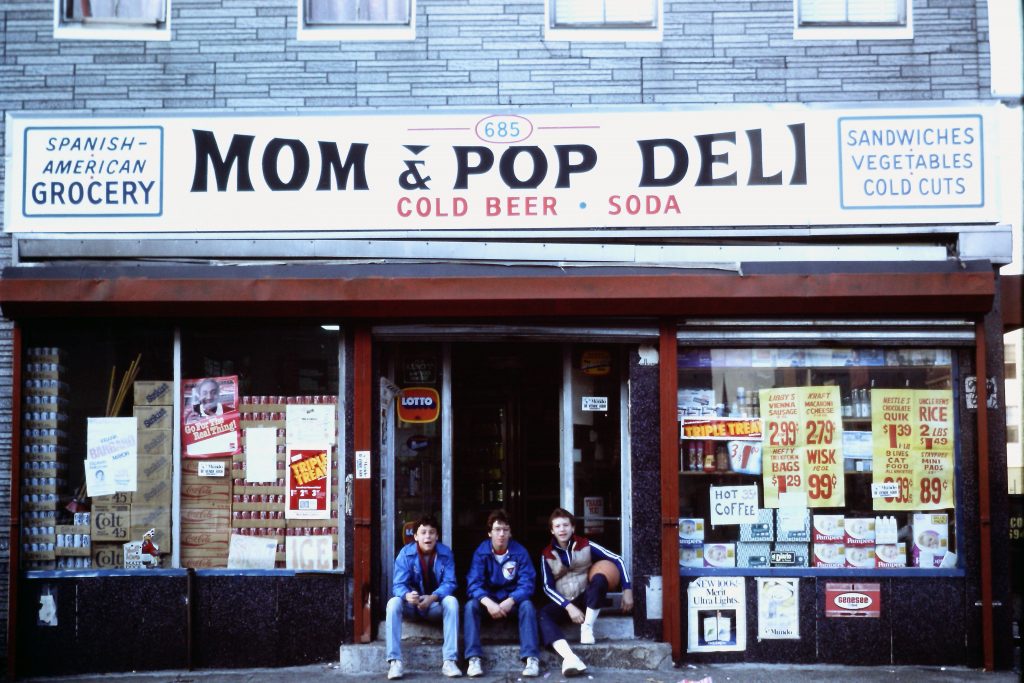 Imagine a time before hipsters started migrating to Brooklyn, and gentrification hadn’t taken hold. Though celebrations by immigrant communities throughout the calendar year are still quite evident in Brooklyn today, the early 1980s was an especially fruitful time to witness these traditions. The Brooklyn Rediscovery Folklife Study Project collection, 1980-1983 (AFC 2017/035), a recent acquisition of the American Folklife Center, shows the myriad ways in which immigrants at that time celebrated traditions from their home countries in their New York neighborhoods. Communities and festivals documented include the Italian-American Giglio Feast, the Caribbean-American West-Indian Day Parade, and the Jewish Sukkot holiday.

We’re excited to announce that the collection has been processed and a finding aid is now available. The finding aid includes detailed inventories of the sound recordings, photographs, slides and field notes contained within the collection. It helps researchers understand what is in the collection, who is documented, and how to find the items they are interested in. 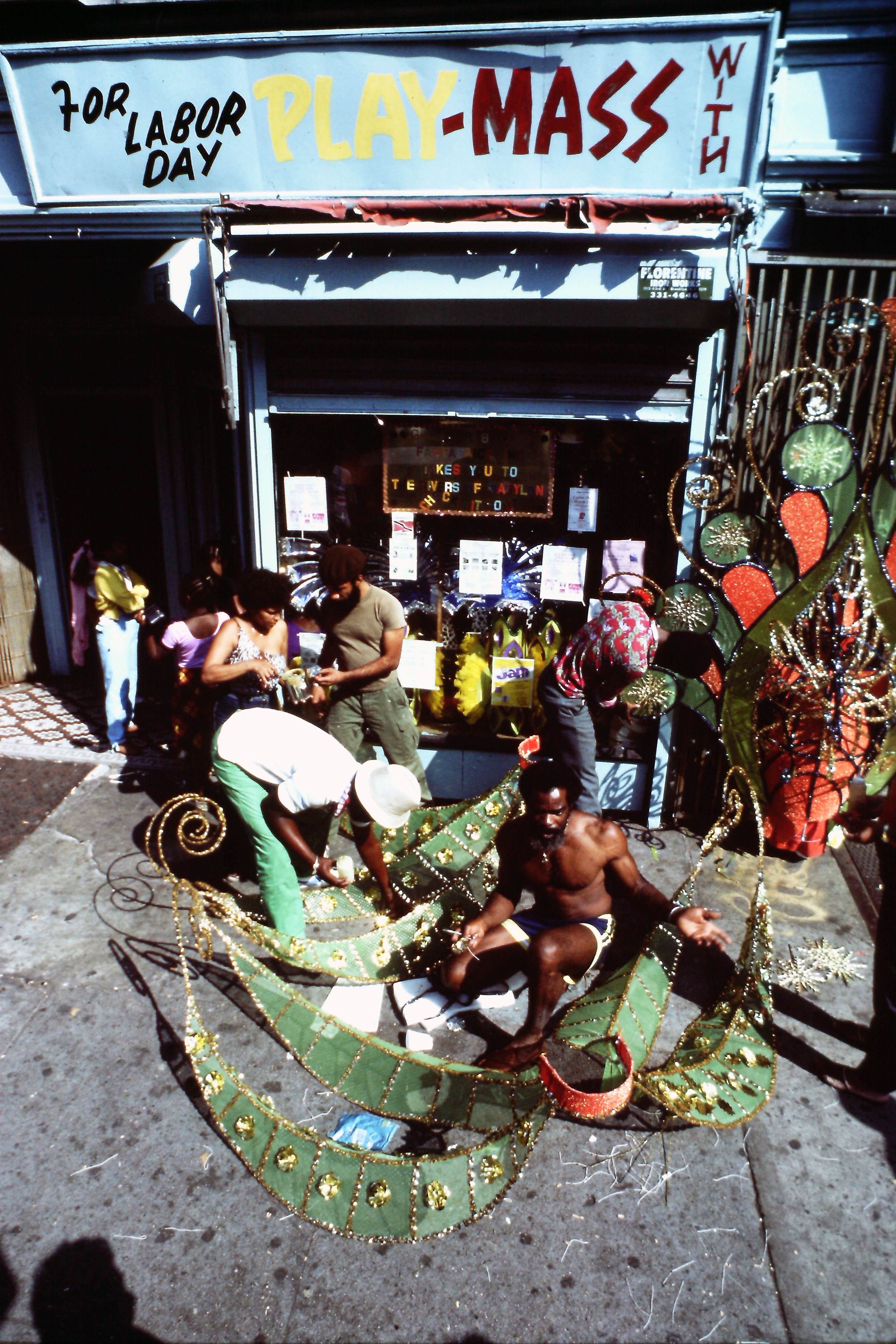 The documentation project, funded by the National Endowment for the Humanities and supported by the Brooklyn Educational and Cultural Alliance (BECA), took place during a period of major support from state and federal arts organizations to document both urban and rural American folklife. It was during this time that the American Folklife Center was in the midst of its 25 ethnographic field projects and cultural surveys. The American Folklife Center supported and advised the directors of the Brooklyn Rediscovery Folklife Study Project (BRFSP), and loaned Nagra audio recording machines, Sennheiser microphones, and other equipment for the project. It seems to have come full circle for AFC to acquire the BRFSP collection in 2017 and to continue preserving and providing access to its rich documentation of urban folklife.

The Project arose from folklorists Robert Baron and Margaret Latimer’s proposal to do an intensive study of three neighborhoods in Brooklyn – Williamsburg, Bedford-Stuyvesant, and Bay Ridge. The project took place from 1980-1983, and the fieldwork culminated in an educational essay/booklet titled, “Tradition and Community in the Urban Neighborhood: Making Brooklyn Home,” a photo exhibition in Borough Hall, and workshops and presentations with Brooklyn tradition-bearers. The project included a project director, fieldwork director, several fieldworkers, a documentary photographer, a historian, and an archivist. They were ambitious, wanting to document a variety of traditions from different communities and the timing of various festivals and events overlapped, so fieldworkers split their work among neighborhoods and areas to ensure good coverage. The project directors sought fieldworkers who were members of, or strongly connected to, communities they were documenting so community members could develop a sense of trust in the project. 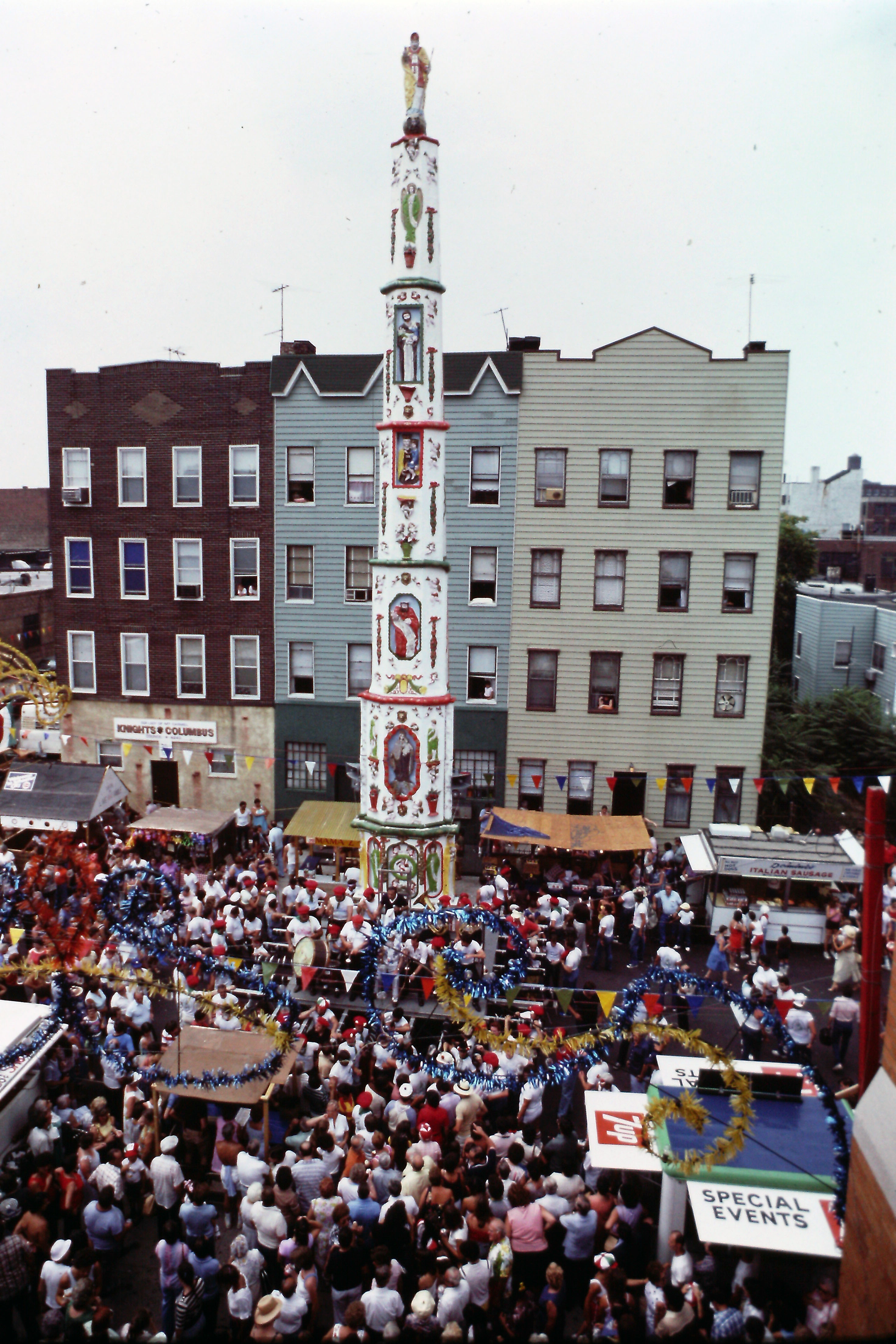 Dancing the Giglio, Williamsburg, Brooklyn. The Giglio, a huge flower-laden steeple of wood, more than 80 feet high, is carried through the streets on the shoulders of hundreds of men. Photograph by Martha Cooper.

As the archivist processing the collection, I was grateful to have the chance to be in touch with the collection donors and directors of the Brooklyn Rediscovery Folklife Study Project, Sheldon Posen and Maxine Miska. Posen and Miska were generous in answering questions about the collection, which led me to arrange the materials according to the ethnic community/tradition that was being documented. They described their conceptual framework for the project, the notion that folk traditions—decorations, festivals, games, and other practices—help transform space into place. This concept is visibly evident in the elaborate festivals the project staff documented, as well as in the other uniquely urban Folklife practices documented, such as pigeon flying and games such as boccie and skelly.

The best way to illustrate the richness of the Brooklyn Rediscovery Folklife Study Project collection is to share some visual examples. The 35mm slides in this post are of the three communities that are most heavily documented in the collection – the Italian-American community, the Caribbean American community, and the Hasidic community.

The Italian-American Giglio Feast usually opens the week after the 4th of July, and runs for 12 days including the feast day of Our Lady of Mount Carmel, in Williamsburg, Brooklyn. The feast pays homage to the patron saint, San Paolino or Saint Paulinus, of Nola, Italy, and culminates with dancing the Giglio, a huge flower-laden steeple of wood, more than 80 feet high, carried through the streets on the shoulders of hundreds of men. 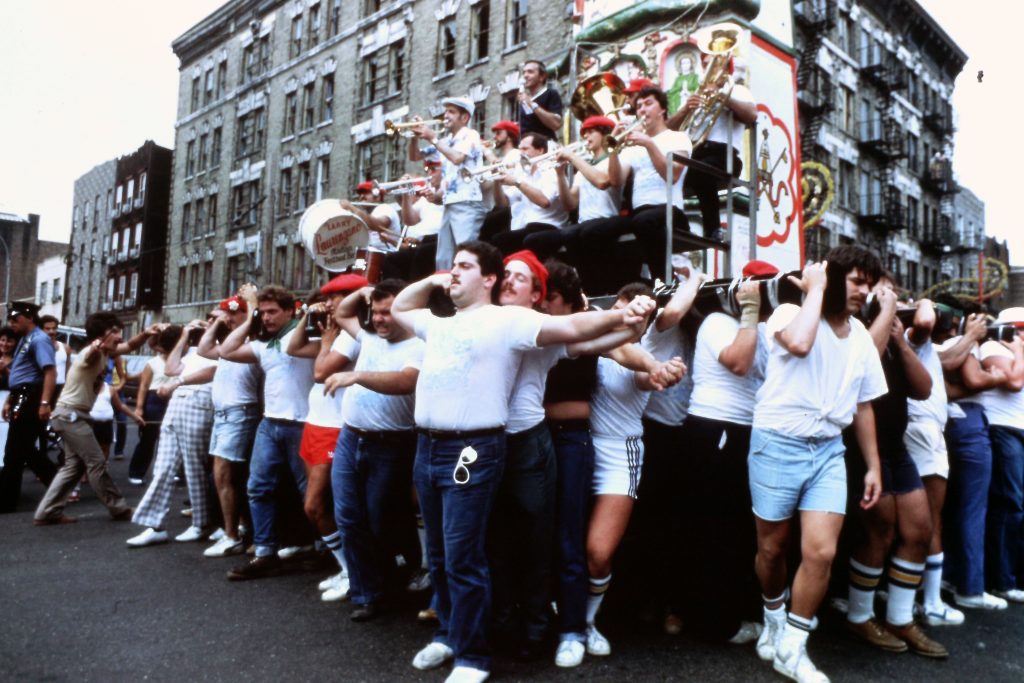 Men carrying the Giglio, as well as a brass band. Williamsburg, Brooklyn. Photograph by Martha Cooper.

The West Indian Day Parade occurs over Labor Day weekend and celebrates the history and culture of many Caribbean islands, including Jamaica, Haiti, Trinidad and Tobago, and Grenada. Participants dress in elaborate and colorful costumes, steel pan ensembles perform and compete, and spectators follow the parade along Eastern Parkway in Crown Heights, Brooklyn. Preparing for the parade involves designing and constructing ornate costumes, as well as building steel drums for the event. 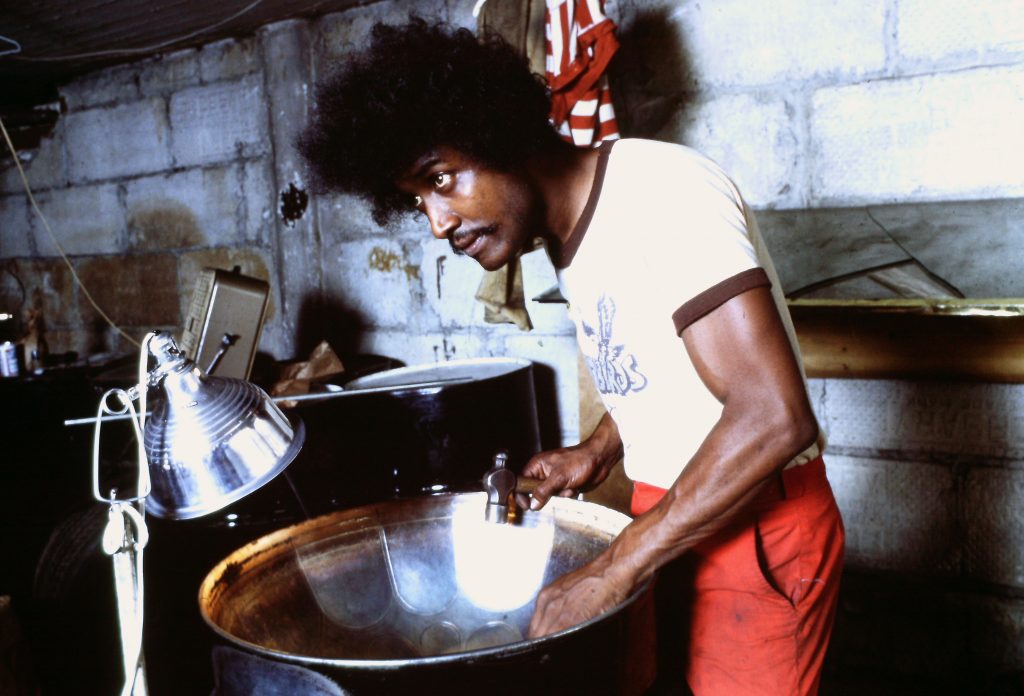 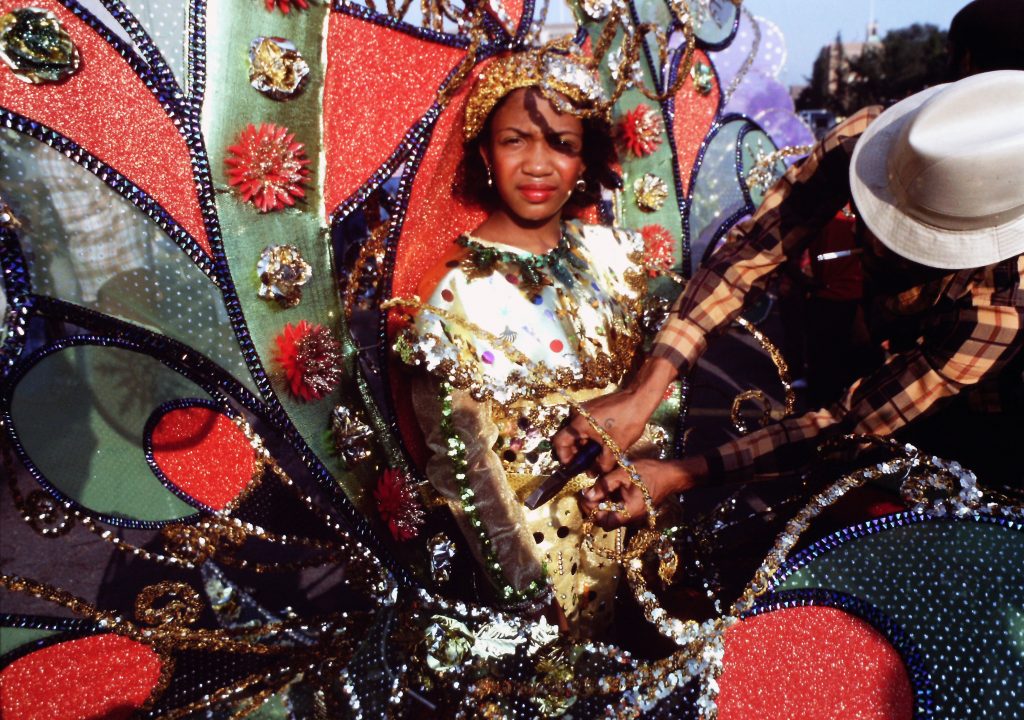 The Jewish Sukkot holiday takes place at the end of the harvest time, and commemorates the 40 year period of fragility following the Jews’ exodus from slavery in Egypt. Along with building and spending time in temporary dwellings to be reminded of the fragility, Jews wave four specific plants mentioned in the Torah in a ceremony every day of the Sukkot holiday. The color slides from the Essex Street Market in the Lower East Side of Manhattan depict people selecting the perfect lulav and etrog (encompassing the four species) to purchase for the holiday. 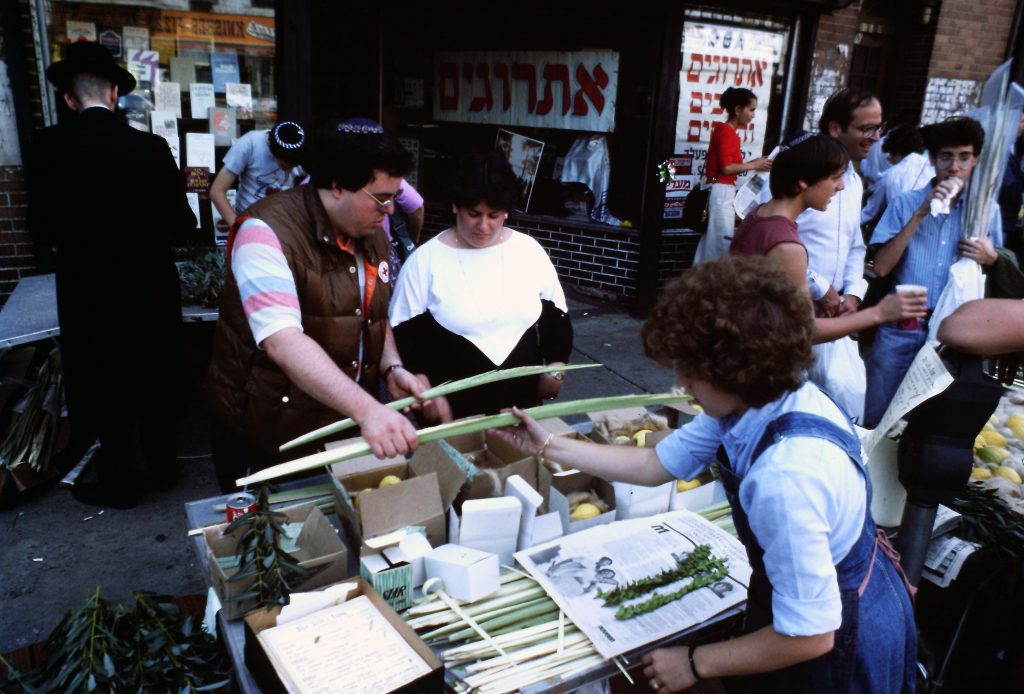 Examining a lulav (part of the four species) at the Essex Street Market to purchase for the Sukkot holiday. Photograph by Sheldon Posen. 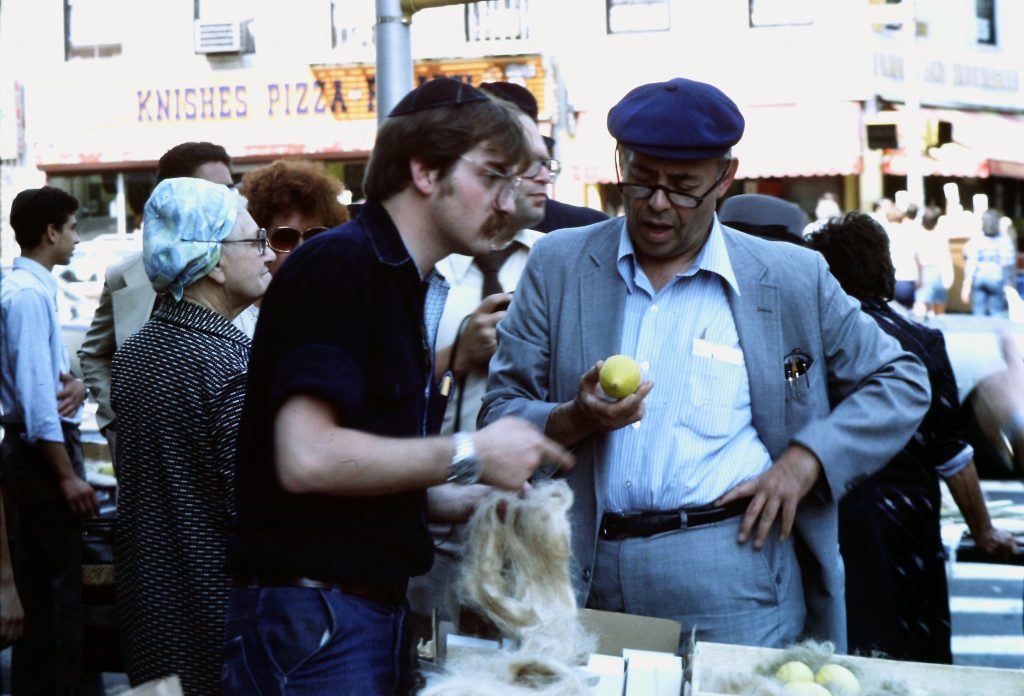 Scrutinizing the etrog (part of the four species) at the Essex Street Market to purchase for the Sukkot holiday. Photograph by Sheldon Posen.

In addition to the in-depth documentation of these three festivals, the collection includes materials on African Americans, Greek Americans, Polish Americans, Puerto Ricans, Irish Americans, Chinese Americans, and Ukrainian Americans. There is a lot to explore in this collection, and with the newly online collection finding aid, we hope people will inquire about the range of visual, manuscript, and audio materials to be found there.

Trump Heads to Hanoi for Second Summit With Kim (VIDEO)

UGANDA: NTVUganda has added TAKE NOTE: What needs to be done to ensure that mothers have safe delivery? video