A Sailor, a Nurse and a Kiss, on V-J Day – LIBRARY OF CONGRESS 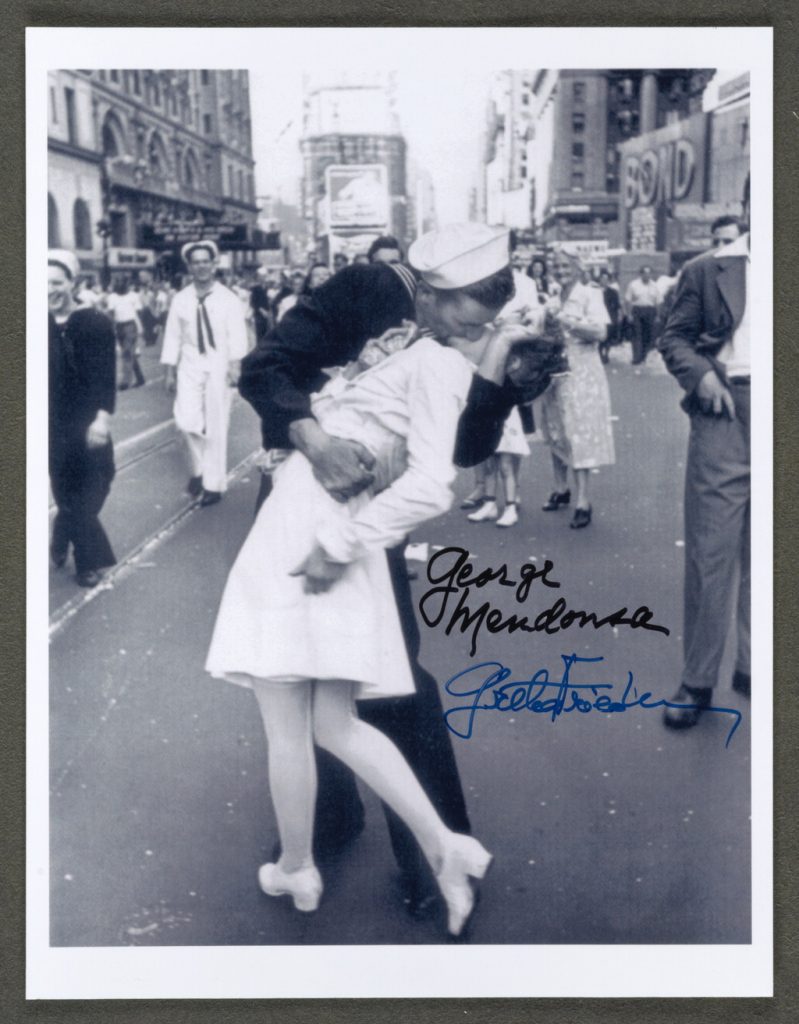 Autographed digital print in B&W, of George Mendonsa and Greta Friedman kissing on V-J Day in Times Square, New York. George Mendonsa Collection. Veterans History Project, AFC/2001/001/42868.
The following is a guest post by Monica Mohindra, Head of Program Communication and Coordination, Veterans History Project.
“A Kiss is Just a Kiss.”  Or is it, “As Time Goes By?” When the publishers staged a reunion in 1980, they used another crooners’ standard, “It Had to be You” on a placard in the background. 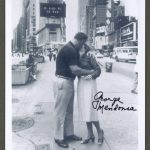 George Mendonsa and Greta Friedman recreating the kissing scene from V-J Day in Times Square, New York, 1980. George Mendonsa Collection. Veterans History Project, AFC/2001/001/42868.
But was it the right sailor, the right nurse?
She said, he said.  Do you remember the argument that took the Internet by storm four years ago? Did you see a blue dress with black stripes, or a white dress with gold stripes? So often it comes down to a matter of perspective, and the limitations of thinking in the strict terms of a dichotomy.
The woman was 21 years old.  She wore a white uniform to work in a dentist’s office. The man was 22 years old; he thought she was a nurse. The year was 1945; V-J Day. She says she was on her lunch break.  He says it was late afternoon or early evening.  She was worried about getting back to work, and would later become a bookbinder and an artist. He was on a date with a “beautiful blond,” also 21 years old, who would later become his wife of 72 years, Rita.
Rita witnessed the kiss, but didn’t notice the photographer snap the image of George, who later said,

…it was the uniform she had. If that girl did not have a nurse’s uniform on, I honestly believe that I never would have grabbed her.

Neither George nor Greta Friedman, the dental assistant, saw the photographer either.
Greta reflected,

I felt he was very strong, he was just holding me tight, and I’m not sure I…about the kiss because….but it wasn’t a romantic event. It was just an event of ‘thank God the war is over’ kind of thing, because it was right in front of the sign.

One of the things that fascinates me most about our work at the Veterans History Project is the ongoing relationship and rhythm between the two major facets of oral history.  It is both a process and a product. The different vantage points offered—of what appears to be the same event—by various people, complicates, colors and provides layers of context.  It also illuminates biases, assumptions and cultural understandings relative to the time the events occurred, when the interviewer asks questions and when the record is reviewed.  And over a long life, those multiple realities can compound even for the original narrators.
There are so many lenses to this particular story of “The Kiss,” so many characters beyond the focal point of the photo.  The photographer of the famed image, Alfred Eisenstaedt, wasn’t the only photographer, and there were lots of grabs and kisses on that day in Times Square, as people gathered together in the euphoria of the end of the war.  The staged reunion in 1980 was also full of twists, turns and more concerns.
Greta said, “Actually the fame belongs to the photographer because he provided an art. I can’t call it a skill. He was an artist.”
George said, referring to himself, “The sailor is the guy that made that picture.”
But that isn’t all either of them said, and it doesn’t tell you their story, or who they were.  There are as many mysteries to unravel about them, money, fame, multiple images, media business and publication decisions, identity, consent, cultural norms, as there are primary sources to dive in to. These are just the words I chose to focus on.
Think you know this story?  Start here, and listen to Greta and George in their own words.
With thanks to Patricia Redmond, interviewer, for her tenacious pursuit of documenting this story.
Tags: educationLibrary of Congress
ShareSendTweetShare

Corey Hart - Everything In My Heart (Official Music Video)

PARENTING: The joy of being a mother!

WHAT SPARKED OFF THE INVASION OF AMIN IN 1978?