Economic growth in Uganda may accelerate in the coming fiscal year, underpinned by government spending on infrastructure and an anticipated recovery in lending to the private sector, according to the International Monetary Fund.

The growth rate may increase to 5.5 percent in the 12 months through June 2018, compared with an estimated 4.5 percent this year and 4.8 percent in the prior 12-month period, Clara Mira, IMF’s resident representative in Uganda, said in an emailed response to questions. The Finance Ministry forecasts slightly higher growth of between 6 percent and 7 percent.

The East African nation, which is on a cusp of oil production, is investing in electricity production, roads, railways and an oil pipeline. Expenditure on government projects will increase 11 percent to 4 trillion shillings ($1.1 billion) in the coming fiscal year, Finance Minister Matia Kasaija said March 23. That will account for about 13 percent of overall planned government spending, according to Treasury estimates.

“The effective implementation of the infrastructure investment scaling up — to ensure that the projects yield the expected growth, exports and fiscal revenue dividends — together with investments in the oil sector and the start of oil production, and further progress in regional integration are expected to push growth in the medium-term to over 6 percent,” Mira said Tuesday. 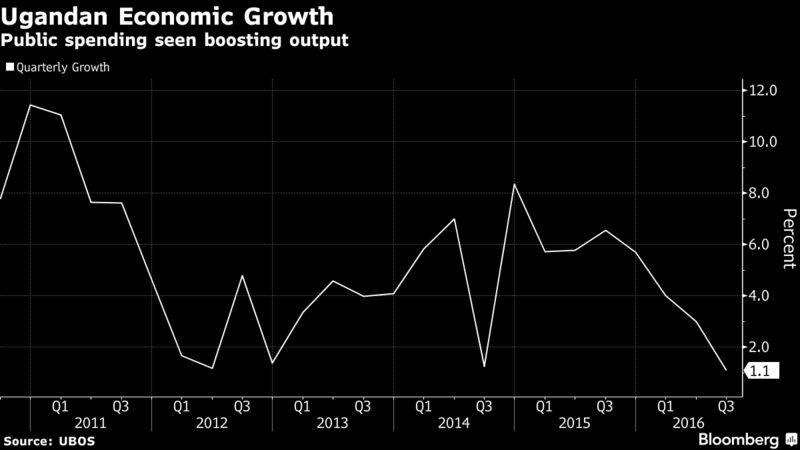 Uganda is increasingly borrowing to fund its “ambitious” infrastructure projects, which may raise public debt to a peak of 44 percent of gross domestic product in 2020-21, from 35 percent in 2015-16, Mira said. The debt levels remain manageable and at low risk of distress, she said.

Uganda is Africa’s biggest exporter of coffee, which is one of the country’s main source of foreign exchange. The shilling weakened 6.2 percent against the dollar last year.

The debt level will remain sustainable if the government implements its development plans properly and returns to fiscal consolidation once the projects are complete, she said.

The nation’s tax-to-GDP ratio of about 13 percent is “significantly” lower than that of regional peers, she said. Increasing compliance with value added tax could yield additional revenue equal to 2 percent to 2.5 percent of GDP. The IMF also urged the government against tax exemptions to enhance revenue collection.