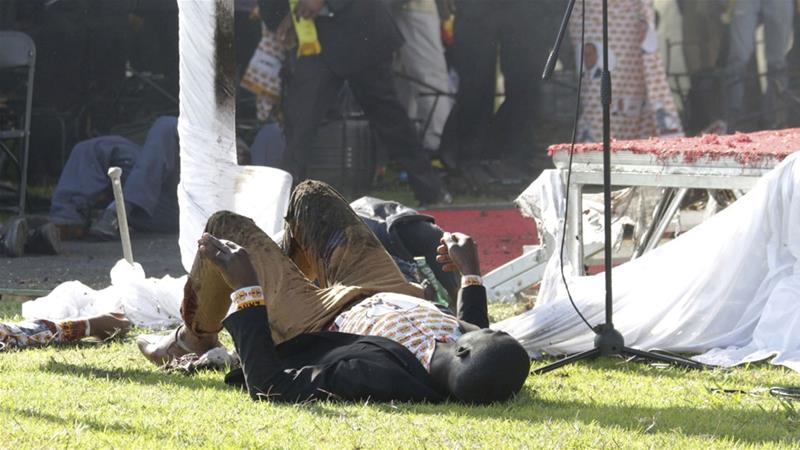 Zimbabwe explosion sullies hopes for an election free of tension

AL JAZEERA – Analysts say explosion could trigger violence ahead of next month’s presidential and parliamentary polls.


Bulawayo, Zimbabwe – The blast that wounded several people as President Emmerson Mnangagwa left a campaign rally in the city of Bulawayo may have significantly changed the country’s political landscape ahead of next month’s tight poll race, analysts say.

Dewa Mavhinga, Southern Africa Director of Human Rights Watch described the incident as “awful and appalling” but he commended Mnangagwa’s immediate condemnation of the blast and calls for peace ahead of presidential and parliamentary polls on July 30.

“The authorities must swiftly and thoroughly investigate the incident and hold accountable those responsible.

“The incident could trigger violence ahead of elections, but President Mnangagwa has done well to call for peace and calm,” he said.

Although Mnangagwa pleaded for unity and peace after he survived the blast, Eldred Masunungure, a political analyst and academic, expressed scepticism about the possibility of a peaceful election next month.


Masunungure told Al Jazeera that although the climate towards the polls seemed more promising of less violence compared to other elections since 2000, the explosion sullied hopes for an election free of tension.

“This sours the political environment after it seemed like all parties were taking steps to ensure the election would be free of violence. This worsens the tension that had already been culminating around the election and it creates a lot of uncertainty on how far some are willing to go in order to demonstrate their power or even the lack of it,” he said.
‘Does not augur well for the future’

For the first time since Zimbabwe gained independence from Britain in 1980, the 94-year-old will not be contesting in the election.

Under Mugabe’s authoritarian grip, polls over the past two decades have been characterised by violence and heated disputes over results.

In the worst face-off between the ruling Zanu-PF and the main opposition Movement for Democratic Change (MDC-T) close to 200 opposition supporters were killed during a presidential runoff vote in 2008.

Although Mnangagwa’s leadership has seen a relatively freer environment in Zimbabwe, Masunungure warned acts targeting the Zanu-PF government could see a closing up of a relatively more liberalised society.

“If this unfortunate and callous act was an assassination attempt on the president as the state media have called it, then it does not augur well for the future because there are hardliners within Zanu-PF that are going to use incidences like these to call for tighter regulation of the liberal space that people have been enjoying since November,” he said.

At Mpilo Hospital on the western edge of Bulawayo, Zimbabwe’s second largest city, Zanu-PF members could still be seen milling about casualty and the wards tending to injured people and relatives in the late hours.

The sadness and anger some party members feel are visible, and they point fingers at those envious of Mnangagwa’s power, but many others such as Foster Ndaba, a Zanu-PF youth chairman, feel undeterred by the blast and say the ruling party is headed for a straight win.

“They tried to assassinate our president, but he will continue with his plans, he’s not going to step down for that; he’s not a coward,” Ndaba said.

Despite having to tend to one of four Zanu-PF comrades reportedly in Mpilo’s intensive care, Ndaba reiterated Mnangagwa’s afternoon rally call for Zanu-PF to have a clean victory, untainted by blood.

“Even after everything, it will be [a] free and safe election. We might have four comrades in the ICU, but we hope for life and we hope to win,” he said.

Both are scheduled to hold rallies across Zimbabwe and have individually called for a free, safe and credible election.

TURKEY: Erdogan claims victory, calls on country to focus on future after election