Staff Reporter | June 21, 2018
Want create site? Find Free WordPress Themes and plugins.
DW – Given Peru’s attacking performance in their defeat to Denmark and the sheer talent in the French ranks, fans could be in for an exciting spectacle in Yekaterinburg. Didier Deschamps’ team is under pressure to perform. 46′ Second half is off and running.

HT analysis: Just the one goal, but a very impressive half from France, who have demonstrated pace and penetration in equal measure. Pogba, Griezmann and Mbappe have all been expressing themselves out there, while Giroud offers a focal point for the attack lacking when little Griezmann has to lead the line by himself. The only disappointment for the French might be their failure to finish this game off before half time.

45+1′ Two additional minutes this half.

43′ Two bites at the cherry for Hernandez, arriving on the left to latch onto a Griezmann pass. Both shots were palmed to safety by the keeper. France might be a little disappointed not to have a two-goal cushion at the break.

39′ Mbappe’s pace nearly unlocks the door again. He bursts clear on the right, works the ball on to Griezmann, who looks for Giroud for the final touch. Only then, when seeking the slower striker, was Giroud just a step behind the ball. Might Dembele have got there?

34′ The original shot was Olivier Giroud’s, but it took a big deflection, bounced over the keeper, and Mbappe was on hand to make sure and slot the ball into an unguarded net.

33′ Paul Pogba with an inspired chipped pass over the and Mbappe tries to backheel it home to no avail.

30′ Huge chance for Peru after excellent work from Cueva down the left flank. Lloris did well to save a powerful low shot from Guerrero with his feet.

27′ The action’s calmed after France’s repeated knocking on the Peruvian door around 10 minutes ago.

16′ Blaise Matuidi goes in the book.

16′ Penalty appeal, waved away. Mbappe was bursting into the box.

14′ A flurry of French chances, most recently Raphael Varane heading just off target. The center back was up for a corner.

13′ Kylian Mbappe and slow motion replays are a match made in heaven. We just had a tasty recap of his early dribbling trickery.

12′ Paul Pogba goes close with his right from range.

11′ France are yet to settle in this one. For the first time they complete a move and reach the penalty area. Giroud fed Griezmann, arriving off the big man’s shoulder, and he fired over the bar.

6′ Peru spy Hugo Lloris off his line and try a shot from near the half-way line. Ten out of 10 for imagination, more like a four for execution.

We now know how both teams will line up. Two big changes for France as Matuidi replaces Tolisso and Olivier Giroud is introduced as an out-and-out striker. It’s Ousmane Dembele making space for the Chelsea man, Griezmann and Mbappe will play off Giroud.

Right, on to Match 2 today… 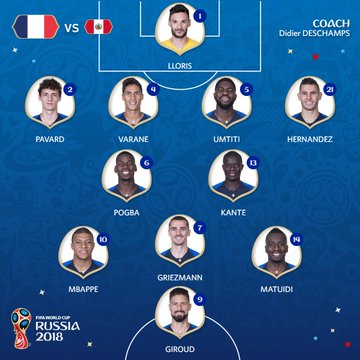 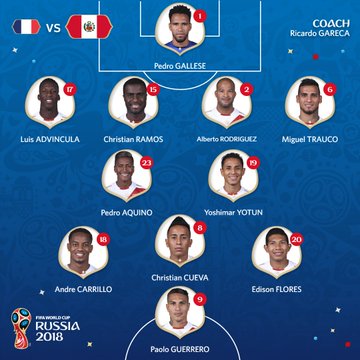 VfB Stuttgart defender Benjamin Pavard is at his first international tournament with France and is set to start again at right-back. Bayern Munich’s Corentin Tolisso started in midfield against Australia but faces competition from Blaise Matuidi. Ex-BVB star Ousmane Dembele, now at Barcelona, is one of France’s most dangerous attackers.

Peru’s colorful supporters have made a big impression off the pitch in Russia so far and their team impressed as well against Denmark, despite ultimately losing 1-0. The South Americans created a host of chances — Andre Carrillo and Edison Flores were particularly dangerous — but couldn’t put the ball in the net, Christian Cueva even missing a penalty. —— AUTO – GENERATED; Published (Halifax Canada Time AST) on: June 21, 2018 at 01:16PM

WORLD CUP 2018: To those AFRICANS mourning the Morocco loss on grounds “African Country”