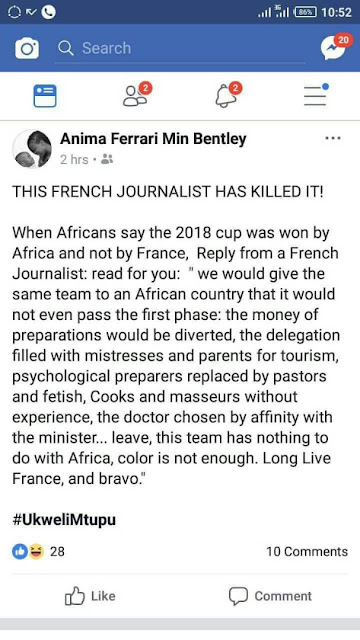 Before you all from SHITHOLE countries hit your phones and tweet or Fakebook, #SoccerChat256 just made me understand why we as Africans must not claim a win.

You claim that we won. Yet, you export our kids.

You claim that we won, yet you revive slavery and sell our kids to Arabs.

You claim that we won because you are proof of it, yet you broadcast from California.

You claim that we won, yet your voices are silent on the thousands of Africans dying at sea or being sold.

You claim that we won, yet you never speak up about the gross human rights abuses or on going genocides.

Yes, the whites take our kids. But do they kill them like Arabs?

You say Europe and America steal our resources. But why do you beg them to fund your bloated budgets and give you arms to kill our people?

France will take a child, educate, house and give the child sports. Give the child an even play ground like French kids. Canada does the same.

You who claim that Africa won likely have off shore accounts.

France won square. Deal with it. Qatar is not too far. Win square in Qatar.

Did you find apk for android? You can find new Free Android Games and apps.
Sharing is caring:
Sports, Opinion Sports, Opinion Comments Off on WORLD CUP 2018: Africa did not win the game, France did Print this News