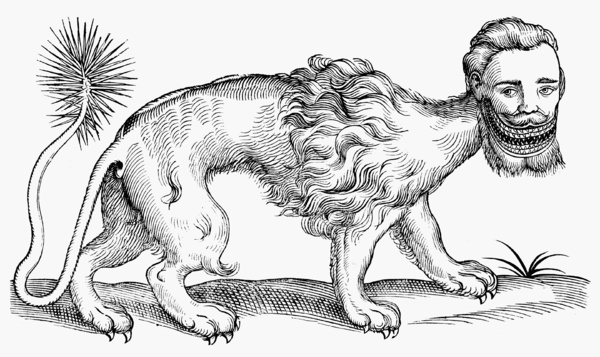 DefinitioN: a legendary animal with the head of a man, the body of a lion, and the tail of a dragon or scorpion

A mythical creature of ancient fables, the manticore keeps company with the better-known unicorn, dragon, and griffin. Descriptions of the manticore’s features sometimes differ (some accounts mention porcupine quills or poisonous spikes, for example; others depict the tail as having a serpent’s head), but the animal is by all accounts a dreadful beast.

The word manticorecame to English through the Greek mantichōras and Latin mantichora, and is probably ultimately of Iranian origin. Etymologists think it is related to an Old Persian word for “man-eater.”Examples of MANTICORE

The recently unearthed stela depicts a manticore and several other frightening and fantastic creatures.

“Here be dragons. Also a cacophony of bird calls, a stunning painting of a stinky plant, and everything you always wanted to know about the manticore(part man, part lion, all the rage in 1658) but were too historically uninformed to ask.”
— Karla Peterson, The San Diego Union Tribune, 27 Aug. 2016