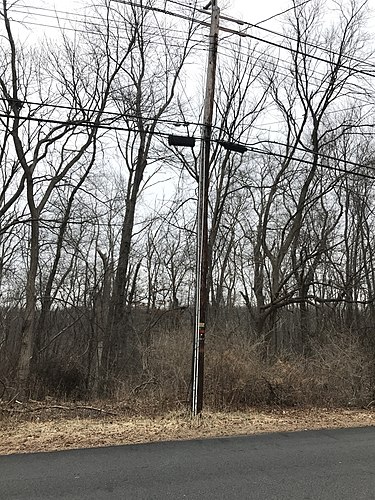 The Wikipedia article of the day for July 24, 2018 is 2017–18 Bergen County eruv controversy.
Three municipalities in the U.S. state of New Jersey resisted the construction of an eruv within their borders in 2017 and 2018. An eruv is used by Orthodox Jews as a ritual boundary that facilitates travel on the Jewish Sabbath, and the one in Bergen County was marked by plastic pipes attached to utility poles. Mahwah, Upper Saddle River and Montvale ordered it dismantled, as their permission had not been obtained. During the controversy, many Mahwah residents angrily protested against the prospect of Orthodox Jews from Rockland County, New York, using local parks or seeking to buy homes there. The eruv association brought federal lawsuits against each of the municipalities. In Mahwah, an ordinance was passed barring nonresidents of New Jersey from its parks, leading to accusations of anti-Semitism. A settlement was reached allowing the eruv to remain, but Mahwah still faces a lawsuit from the New Jersey Attorney General accusing it of discrimination.

Did you find apk for android? You can find new Free Android Games and apps.
Sharing is caring:
wikipedia, article of the day, 2017–18 Bergen County eruv controversy Entertainment, Education Comments Off on Wikipedia article of the day for July 24, 2018 Print this News