BBC – The spouse of one US president and the mother of a second, Barbara Bush was never content to accept a passive role as political wife.

A long-time campaigner for social justice, she spoke out against racial segregation and threw her weight behind the drive to eradicate illiteracy in America.

At times she had to tone down her more liberal views to avoid clashes with her husband’s party. 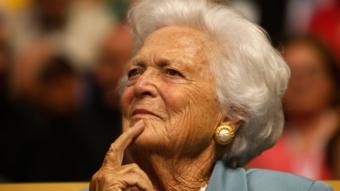 This included her natural instinct to take a more pro-choice side in the abortion debate.

She was born Barbara Pierce in New York City on 8 June 1925, the daughter of a magazine publisher.

It was while she was still at school – at just 16 – that she met fellow student George Herbert Walker Bush and the couple became engaged in 1943. 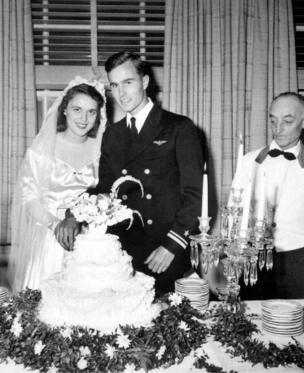 Shortly afterwards, her fiance went off to serve in the US Air Force.Barbara married George HW Bush while still a teenager. ‘I married the first man I ever kissed,’ she would joke. ‘When I tell this to my kids they just about throw up.’

They married in 1945 and the new Mrs Bush spent 18 months as an air force wife before her husband was discharged.

Later, she would quip that ‘I married the first man I ever kissed. When I tell this to my children they just about throw up.’

They moved to Connecticut when George was accepted at Yale and it was there that her first son, George Walker Bush, was born in July 1946.

The family then moved to Texas where her husband got a job with an oil company run by a friend of his father. He eventually founded his own oil development company in 1950.

For the next nine years Barbara Bush fulfilled the role of wife and mother, while her husband built up his business.

The death of their three-year-old daughter Robin from leukaemia in 1953 inspired Mrs Bush to campaign on behalf of cancer charities. An interest in improving literacy was sparked when her son Neil was diagnosed as dyslexic.
Conflict

She also became aware of segregation in the South after driving across America with two African-American women in order to reach a holiday home in Maine.

She discovered, to her horror, that her two companions were not allowed to sleep or eat in the same hotels and restaurants as white people. 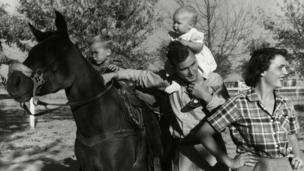 For the rest of her life she spoke out against racial bigotry, often finding herself in conflict with right wingers in the Republican Party.In the first years of her marriage she devoted herself to her family. She and George would have 6 children together.

She became a political wife in 1964 when George campaigned, unsuccessfully, to become a Republican Senator for Texas.

But, two years later, he entered Congress and his wife launched herself into political life, working for various Republican women’s organisations.

In 1970, after George Bush failed for a second time to reach the Senate, President Richard Nixon appointed him US ambassador to the United Nations.

Barbara Bush relished the opportunity to make new contacts among the international community and was able to widen that circle when her husband was posted to Beijing by President Nixon’s successor, Gerald Ford.

In the mid 1970s, George was appointed as Director of the CIA. It was a difficult period in Barbara’s life during which she suffered from a deep depression.

In her autobiography, she recalled how she would have to stop her car on the side of a highway for fear she would deliberately crash into a tree or an on-coming vehicle.

‘Night after night, George held me weeping in his arms while I tried to explain my feelings,’ she wrote. ‘I almost wonder why he didn’t leave me. I knew it was wrong, but couldn’t seem to pull out of it.’ 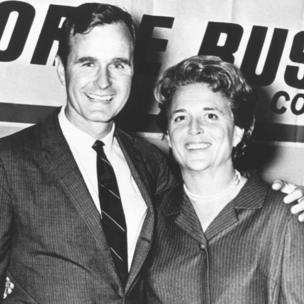 She never sought medical help for her feelings, which she put down to a combination of the menopause and the stress of her husband’s job. The despair vanished after about six months.She relished the role of political campaigner although her views on issues like abortion were more liberal than her husband’s.

When George entered the primaries for the Republican presidential nomination, Barbara campaigned enthusiastically for him.

The couple’s relatively liberal views on abortion and equal rights were at odds with the growing influence of the conservative wing of the Republican Party under Ronald Reagan.
Witty speaker

The former California governor’s decision to invite George Bush to be his vice presidential running mate meant Barbara had to publicly toe the party line on these issues.

As the wife of the vice president, Barbara Bush stepped up her campaign to improve adult and child literacy, putting her weight behind organisations working in the field. 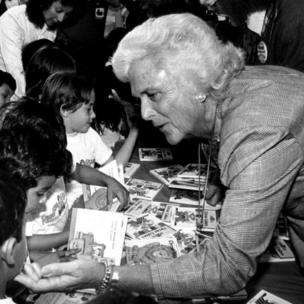 She also emerged as an entertaining and witty public speaker, and her experience of two vice presidential campaigns stood her in good stead when her husband ran for the White House in 1988.She campaigned to eradicate illiteracy in the US

When she appeared at the Republican convention that nominated him, she became the first wife of a candidate to speak in support of their husband.

Once in the White House she founded the Barbara Bush Foundation for Family Literacy, designed to raise money for literacy programmes.

She also made regular radio appearances on a programme called Mrs Bush’s Story Time, which championed the benefits of parents reading aloud to their children.

She continued her drive to improve civil rights in America and was reputed to have been influential in the appointment of the first African-American to her husband’s cabinet.
Avoiding clashes

Not all her beliefs were shared by her husband. Her support for gun control elicited strong reaction from his supporters in the powerful National Rifle Association.

And she toned down her relatively pro-choice views on abortion to avoid clashes with powerful groups within the party which might have threatened the stability of her husband’s presidency.

However, she returned to the subject of abortion during the 1992 campaign, stating her belief that it was a private matter and something on which the Republican Party should not take a position.

Her husband failed to gain a second term in the White House, losing to Bill Clinton, and Barbara found more time to spend on her campaigns. 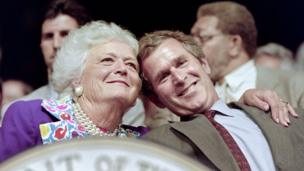 Life outside the White House came as something of a shock to the former first Lady. She realised she hadn’t cooked for 12 years and her driving had become appalling. Her husband warned anyone to get out of the way if they saw her car approaching.With her son at the Republican national convention in 1992. George W Bush would become Governor of Texas two years later. Barbara was far from sure he would win.

Barbara appeared on public platforms with him, notably in front of pensioner audiences, to promote his reforms of social security. Throughout the campaign she harboured grave doubts that he would win.

At George W Bush’s inauguration, she became the first woman in US history to have witnessed both her husband and son become President of the United States.

She was unswervingly loyal to her family but did not automatically extend that support to every member of the Republican Party.

‘I sat next to her once, thought she was beautiful,’ she told an interviewer before adding ‘I think she’s very happy in Alaska, and I hope she’ll stay there.”

In 2013, she joked on NBC that the country had probably ‘had enough Bushes’ but soon had to swallow her words when another son, Jeb Bush, announced he too would run for the Presidency.

At the age of 90, she found herself back on the campaign trail in Jeb’s support – although he would ultimately be unsuccessful in his attempt to secure the Republican nomination. 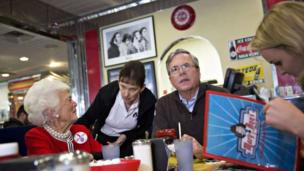 In 2017, Barbara and her husband were given standing ovations at the 2017 Super Bowl. She also actively campaigned on behalf of the victims of hurricane Katrina.

Recently, suffering from heart and respiratory disease, she decided to decline any further medical treatment and return to the family home in Houston.

During long career in public life, Barbara Bush remained a witty and independent-minded bastion of support to her husband and son in the course of their presidencies.

As first lady, she steered a middle course between the public deference of Nancy Reagan and the more high profile role of Hillary Clinton.

And like many of her predecessors, such as Eleanor Roosevelt and Helen Taft, she found this gave her room to champion her own causes behind the scenes.

Did you find apk for android? You can find new Free Android Games and apps.
Sharing is caring:
World News No Comments » Print this News