UN FORCES: How much are countries paid per soldier? 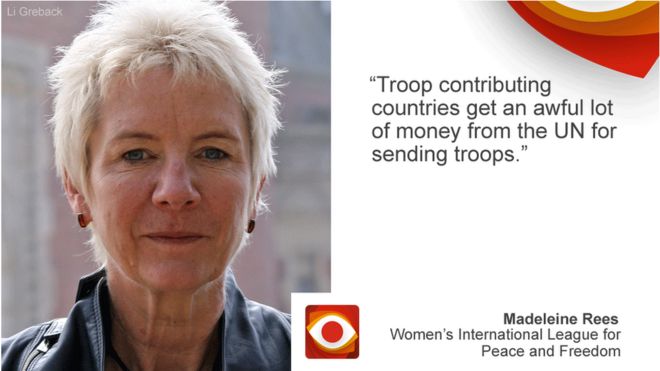 Reality Check verdict: Countries are paid to provide personnel to UN missions and the top countries providing troops are unrepresentatively poor. The amount countries are paid for providing those troops is considerably higher than the average wage in most of the countries sending large numbers of troops.
Madeleine Rees, secretary general of the Women’s International League for Peace and Freedom, told BBC Radio 4’s Today programme that countries providing UN peacekeeping forces could be made to accept a tighter legal framework and prosecutions for misconduct.
“Troop contributing countries get an awful lot of money from the UN for sending troops – they don’t want to not send troops,” she said.
Countries sending troops (including police and military experts) are paid $1,410 (£1,017) per month per soldier by the UN, which is considerably higher than the average wage in many countries.

The top contributors of troops tend to be poorer countries.

The chart below has the GDP per capita for the top 10 contributors of troops – that’s the total amount of goods and services produced in the economy divided by the population.

The GDP figure for the world in 2016 was $10,191 – all of the countries on the list are considerably below this level.

Indeed, according to the data from the World Bank, Rwanda, Ethiopia and Nepal are the 19th, 20th and 21st lowest in terms of GDP per capita among the 191 countries for which figures were available.

Indonesia, the richest country on the list by this measure, was 71st lowest.

The exception to the rule that poorer countries tend to provide the most troops is China – which is number 12 on the list of troop contributor countries – and is also in the top three financial contributors to the UN budget.

The UK is the sixth biggest cash contributor and number 35 on the troop list, with 625 troops deployed.

Clearly, it makes sense for countries such as Ethiopia and Egypt to be well-represented among UN peacekeeping forces given the number of peacekeeping operations near them in places such as South Sudan and Darfur.

It is still remarkable to see Rwanda, with a population of only about 12 million, as the fourth biggest contributor of peacekeepers – 55 people per 100,000 in Rwanda serve as UN peacekeepers.
What are average monthly wages?

Does that mean the countries are well paid?

Remember that the countries are paid by the UN and then pay troops based on their own pay scales.

The latest Labour Force Survey in Ethiopia carried out in 2013, for example, put the average monthly wage at 1,305 Birr a month, which now translates to $47.

In all of those countries, $1,330 a month looks generous.

Did you find apk for android? You can find new Free Android Games and apps.
Sharing is caring:
peace keeping, UN Forces, How much countries are paid World News No Comments » Print this News