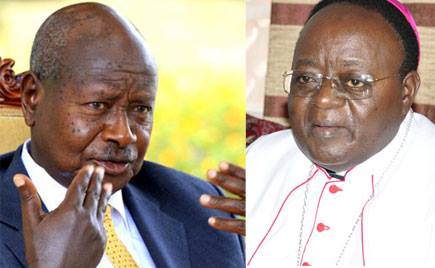 During the Good Friday Holly Mass, the Archbishop of Kampala Archdiocese, Cyprian Kizito Lwanga told the world that Museveni was linking him to plots to overthrow Museveni’s government. Bishop Lwanga claimed to have gotten an anonymous telephone call from someone with an “accent from western Uganda” who cautioned him over the matter. The man of God went further to reveal that the same source confided in him that Museveni had deployed a long chain of informants within the church set up. The Bishop went further and disclosed that his source had intimated that some of his Priests, Sisters, Brothers, and even Catechists and Seminarians had been recruited by security agencies to spy on him.

The Bishop went ahead to reveal that Museveni was being given a lot of misleading information by politicians, businessmen, civil servants, police, CMI, and ISO. Bishop Lwanga called upon them to repent and stop telling lies. He sent a simple and clear message to Museveni thus; “These people are your enemies. They are going to make you fail because your mind is poisoned and you act on such information”. He cautioned Museveni over recruiting wrong people as informants citing that some of them had been dismissed from the church. Bishop Lwanga concluded by advising Museveni thus; ” call us Your Excellency, even individually and tell us face to face what is on the ground. Also, be kind enough to tell us those recruited in ESO, ISO and CMI from our side and we also tell you what concerns them so that you know who and what they are saying”. Bishop Lwanga called upon the church leaders to “resign instead of serving two masters at ago”.

It has now been reported that following the Bishop’s revelations, President Museveni has called Bishop Lwanga. Though the details of their telephone conversation are not known, what is clear is that Museveni is in a panicky mood. Security will try to find out if it’s Gen. Kalekyezi who alerted the Bishop.

FACTS
1. Going by the tone of Bishop Lwanga, his source is not only the so-called “anonymous” telephone caller. He has more credible sources and that is why Museveni has panicked by calling Bishop Lwanga. Otherwise, why is government conspicuously silent and when will security swing into action to investigate???

2. Museveni has been undermining the mainstream Christian churches – the Roman Catholic and Anglican in favor of the Pentecostal movement. This is because of the Catholics and Anglicans’ historical links to the UPC and DP respectively. A few years ago, Museveni warned his then Vice President, Gilbert Bukenya of alleged secret night meetings with “his” army officers and top leadership of the Catholic church.

3. Being the Chairperson of the Uganda Joint Christian Council (UJCC), Bishop Lwanga must have first shared the information with some of the council members who gave him a go ahead to go public.

There is more than meets the public eye.

INFORMATION IS POWER AND THE PROBLEM OF UGANDA IS MUSEVENISM. Published (Halifax Canada Time AST) on: April 03, 2018 at 04:55PM

RELIGION: Man tries “to save” Jesus hitting an actor with a helmet