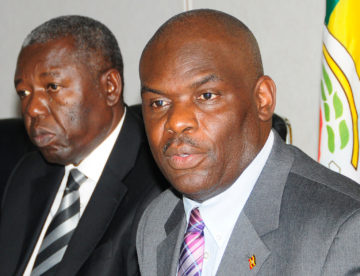 WHO EXACTLY WITHDREW CHARGES AGAINST BOBI WINE IN THE GENERAL COURT MARTIAL???

“ I don’t have powers to release Bobi Wine. Once somebody is arrested, charged and remanded, it is only two authorities who can release such people in any way: the Courts or the DPP withdrawing charges if the evidence is not enough. ”

Museveni – responding to some people who were pleading with him to release Bobi Wine.

Under Article 102 of the Constitution, the DPP is provided for as an autonomous institution mandated to handle and prosecute all criminal cases in the country in any court, except the court martial. Among other duties, the DPP is also mandated to terminate all criminal proceedings in courts of law. The DPP performs this function personally and not even his deputy can do it.

Since Museveni’s army courts are established outside Article 129 of the constitution and cannot be taken to be impartial and independent. The independence of the judiciary is in built under Article 28 of the constitution whereby once a judge is appointed, he can’t be directed by the president unlike members of the Army courts who can be directed, re-deployed or demoted. Museveni’s UPDF Act does not mention anywhere about the Director of Prosecution in the army. However, Museveni’s UPDF has its own Director of Prosecution who exercises the same functions as the DPP.

Interestingly, last week the DPP gave his unsolicited legal opinion to the Judge Advocate of the General Court Martial over the charge of possession of firearms against Hon. Bobi Wine. He told the military court that it was prudent to drop the gun charges against Bobi Wine since he was to face a treason charge in another court but based on similar facts (see attached letter).

“I have instructions that the proceedings before this court, under Regulation 65 of the Uganda People’s Defence Forces Procedure, be terminated and the accused person (Bobi Wine) be handed to police.” Were those “instructions” verbal or written as required by law??

Consequently, the General Court Martial terminated the proceedings and set Hon Bobi Wine free before he was rearrested shortly after and produces before the civilian court to face treason charges.

The DPP’s letter was very clear; he did not withdraw charges but gave a legal opinion to a sister judicial body. The constitution bars him from extending his mandate to the Court Martial. The court martial Prosecutor did not expressly disclose who had given him the instructions to terminate proceedings and hand the ‘accused” person to police.

Last month, around mid July 2018 the army’s Director of Prosecution (DP) discontinued charges against Lt Col Deziderio Balidda and two others. The Prosecutor of the General Court Martial, Maj Raphael Mugisha simply announced in court that on July 5 he received a nolle prosecui (instructions to withdraw the charges) from the Army Director of Prosecutions.

“Mr Chairman and members of court, the director of prosecution has instructed me not to continue with the charges against all the three accused persons because the state has failed to gather pinning evidence against them,”

The accuses senior officer attached to Field Artillery Division in Masindi District was on November 29, 2016 arraigned before the General Court Martial and charged with offences related to breaching national security – recruiting soldiers into rebel activities. He was jointly charged with Warrant Officer II Robert Wanyama and Pte Ivan Asiimwe, a gun repairer at the artillery base. They all pleaded not guilty. He was also accused of disclosing secret information to unauthorized people. The alleged offences attract a maximum sentence of death upon conviction.

In such capital offences and more so those aligned to politics, whether in courts of judicature or military courts, withdraw of charges can only be done with the direct consent of Museveni. Such consent is either prompted by pressure from either local or international circles as the case may be or after the accused has been compromised. In some cases, such withdraw of charges takes the form of a coerced grant of amnesty whereby CMI simply stage manages the Amnesty Commission.

Though the constitution makes the office of the DPP and independent entity, it has been and continues to be used at a tool to propel Museveni’s repression. Around August 2017 aggrieved Ugandans commences criminal proceedings against the then police chief, Gen. Kalekyezi’s and a couple of other officers for torture. The DPP was at hand to sabotage the initiative by seeking to take over the prosecution. The Makindye Court Chief Magistrate, Richard Mafabi ordered the DPP to file a formal application if he wished to take over the criminal case that had been filed against Gen. Kayihura and 7 other officers. This was after the DPP sent a letter to the Makindye Magistrates court expressing his interest in taking over the matter.

In his letter the DPP invoked article 120 of the constitution which mandates his office to take over any criminal proceedings instituted by any person in a court of law. The Magistrate adjourned the matter to 29th August to allow DPP file a formal request to take over the matter. Instead the DPP made an application to Kampala High Court seeking to review the decision of Makindye Magistrate’s Court which had denied him automatic right to take over the prosecution of the case.

Justice Murangira ruled that the DPP is mandated to do take over any criminal matter under article120 [3],[5] and [6] of the constitution hence setting aside the Chief Magistrate’s order. Chief Magistrate Mafabi had mysteriously died two months earlier and the High Court ruling marked the end of the matter.

Museveni is the chief prosecutor in both civilian and military courts. He is the one who instituted and sanctioned proceedings against Hon. Bobi Wine and owing to pressure he withdrew the same charges. That’s why it is not clear as to who withdrew the charges in the Court Martial. For fear of a possible legal challenge, days later the army simply came out with a public statement that it was no longer interested in Hon. Bobi Wine.

“Contrary to the tag that ran during the

Live@9 on NBS TV Station, this is to reaffirm that the UPDF General Court Martial will not resurrect those charges that were leveled against Hon. Kyagulanyi,” the army Spokesperson, Brig. Karemire said.

On the other hand, Hon. Bobi Wine’s legal team should scrutinize this matter or else they were duped and may be in for a big surprise. 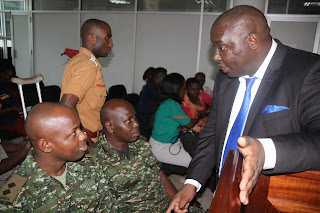 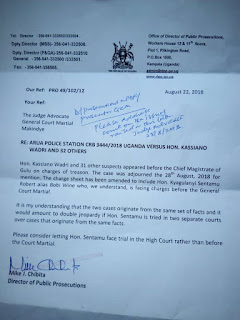 « UGANDA: NTVUganda has added UWONET Dialogue on Gender Roles And The Care Economy video (Previous News)
(Next News) UGANDA: To what extent is “Kenya” financing riots in Uganda? »