UGANDA: We must invest in our people to attract investors – traitor house speaker Kadaga 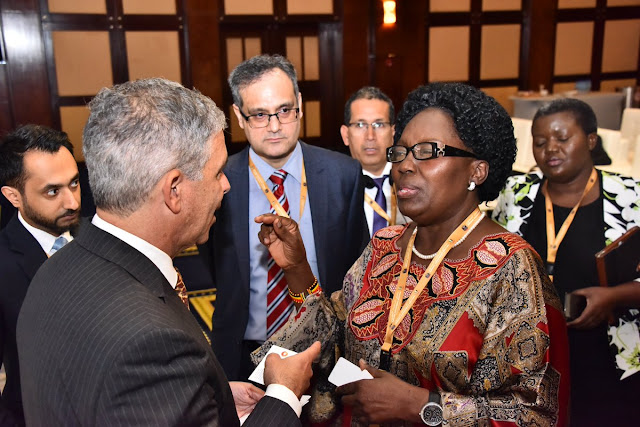 KAMPALA (@UG_EDGE) – The Speaker of Parliament, Rebecca Kadaga, calls for effective skilling of the Ugandan and African population large for effectiveness of public-private partnerships (PPPs).

The Speaker, while attending a meeting at the 8th Annual Investment Meeting(AIM) in Dubai, premised on the use of public-private partnerships for public infrastructure development noted that economies in developing countries were not benefitting much from such partnerships.

“The Mayor of Moscow told us that PPPs enabled him to work on projects outside his ordinary budget; but I told them that African countries go for PPPs because their budgets do not have capacity to support infrastructure growth,” Kadaga said.

She added that most African nations utilizing public-private partnerships risked little or no negotiations because the donors took advantage of the need for funds by Governments.

Panelists at the meeting also noted that a good political environment and skilled labour force in any country was a major basis for attraction of foreign direct investments, as compared to good tax incentives, which African nations needed to work on.

“The team from Kazakhstan highlighted that a skilled labour force is a key driver of investments. As Africans, we need to invest in our people so that the skills attract investors into our countries,” Kadaga noted.

During the meeting, C.E.Os from across the globe noted the rise of virtual markets that would ensure high performance of companies at low costs with maximum operational excellence thus increased market competition leading to improved service delivery.

Public-private partnerships, a 25-30year contract between a government and a private investor is a tool increasingly used by governments to utilize private investment to build and manage public infrastructure like roads, power-generation stations, schools and hospitals among others.

According to the World Bank (Uganda has a financing gap of about US$1.4 billion annually for infrastructure investment with the cost of inefficient infrastructure being high estimated at US$300 million a year due to underpricing and the sector’s inability to complete projects on time. AUTO – GENERATED; Published (Halifax Canada Time AST) on: April 11, 2018 at 03:25PM