UGANDA to investigate its Central Bank for fraud 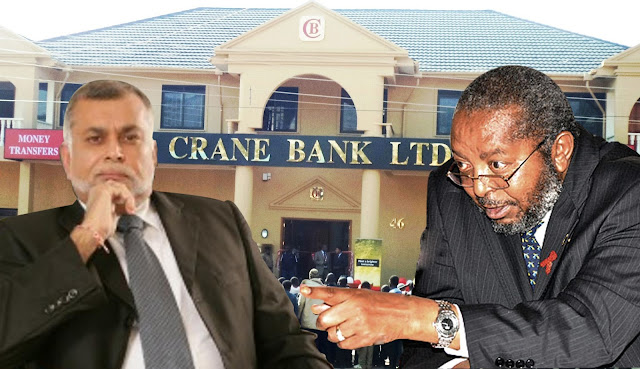 KAMPALA (DAILY MONITOR) – The Auditor General (AG), Mr John Muwanga, has shortlisted up at least five top auditing firms to examine Bank of Uganda operations with “a fine-tooth comb” treatment and the sale of Crane Bank to dfcu Bank.
Although the companies have been shortlisted to pick the bidding documents, only one will be picked to work with a team of forensic experts from the Office of the Auditor General to investigate Bank of Uganda. The AG team will be led by Mr James Bantu, the director for forensics.The listed firms are: EY Uganda, a member firm of Ernst & Young Global Limited, Deloitte and Touch; Tomson & Company; KPMG and Pricewaterhouse Coopers (Pwc).
Sources close to the procurement process told this newspaper that authorities at AG’s office have not notified the five firms because discussions are still ongoing to decide whether some of the companies should be allowed to bid.
Daily Monitor understands some members of a committee chaired by the Assistant AG, Ms Keto Nyapendi Kayemba, queried some of the audit firms which are believed to have conflict of interest in the investigation having been clients of the defunct Crane Bank, which is a subject of the investigation. They cited two firms, PricewaterhouseCoopers and KPMG having been auditors for Crane Bank.

Conflict
Some members of the AG internal committee also complained that some of the audit firms are pre-qualified at BoU and wondered how they would audit their own client.
Other firms, according to sources, were contracted by BoU to audit some commercial banks, including Crane Bank before it was sold to dfcu Bank in October 2016.
They cited the PricewaterhouseCoopers forensic report on Crane Bank that BoU used as a basis to file a case against property mogul Sudhir Ruparelia. The case is pending hearing in the High Court.
The disputed forensic audit report which Sudhir lawyers, Kampala Associated Advocates (KAA), have since called a draft document, was made by Pwc on November 13, 2014.
After realising that Crane Bank was audited by KPMG from 2004-2007 and 2013-2015; Pwc in 2008-2010; Deloitte and Touch 2011-2012, the AG committee proposed that an independent foreign company be outsourced outside Uganda to audit BoU.

However, they were later advised by their government lawyers that “each firm has a territorial boundary.” For instance, you cannot engage EY Kenya when you have EY Uganda.
In trying to prevent conflict of interest, the committee “ended up opening up and including clauses in the bid documents that disqualify inclusion of any staff who ever audited BoU or reviewed audits with Bank of Uganda,” a source quoted recommendations that the internal committee submitted to the AG.

They also resolved to establish a contracts management committee to regularly review and work with the best evaluated bidder.  Mr Muwanga yesterday declined to comment on the listing and eligibility of the audit firms.

However, the chairperson of Parliament’s Committee on Commissions Statutory Authorities and State Enterprises, Mr Abdu Katuntu, who instructed the AG to audit the Central Bank, said he has no objection to outsourcing a firm outside Uganda to audit the institution.
“Outsourcing auditors is a prerogative of the Auditor General [under the Constitution]. So long as they weed out conflicted auditors and do a professional job and are not influenced, that will be fine with us,” Mr Katuntu told Daily Monitor.“We asked AG to audit the management and the sale of the defunct commercial banks by BoU. The audit will also include the disputed agreement the BoU officials signed with dfcu Bank in the sale of Crane Bank and other issues concerning accountability, supervision, guidelines and policies,” he added.
The disputed agreement on the sale of Crane Bank was signed on January 25, 2017 between the Central Bank Governor Emmanuel Tumusiime-Mutebile and Juma Kisaame, the managing director of dfcu bank.
Other sources close to the Inspector General of Government told Daily Monitor last evening that the President in a recent State House meeting picked interest in the matter and supported the impending BoU audit into the Shs200 billion the government released to rescue Crane Bank from collapse.The Auditor General’s expanded audit into BoU was prompted by petitions from former Crane Bank and employees of the central bank regarding Shs200b allegedly sunk into the defunct commercial bank.
Two whistle-blowers petitioned Parliament and IGG calling for an independent audit into the agreement BoU signed with dfcu Bank.
In one of the petitions, the former Crane Bank shareholders allege that they were excluded in the negotiations of the bank’s sale contrary to provisions of the Financial Institutions Act.
They also argue that the agreement does not state the value of liabilities or assets taken over by dfcu.
Mr Julius Kapwepwe, a director at Uganda Debt Network, said it is imperative that every taxpayer’s money is traced wherever, whenever and by whoever, including the Shs200b injected in Crane Bank.Defends audit
“BoU needs to be audited even more deeply. We need to check on BoU more critically and with full accountability, including offshore returns on investments and other dealings with the defunct commercial banks. BoU continues to draw money from the fiscal side every financial year but we don’t see return on investments,” Mr Kapwepwe said.
When contacted for a comment on whether BoU would accept to be subjected to a forensic audit, Ms Charity Mugumya, the director communications said: “no comment.”
Recently, the Inspector General of Government, Justice Irene Mulyagonja, wrote to the BoU board to halt approval of the new staff changes made in February until she completed investigations into the reshuffle.

Some affected BoU staff had petitioned the IGG challenging the new staff changes.
However, Mr Mutebile wrote back to the IGG a charged rebuttal reminding her that the intended investigation was misguided and if undertaken, it would be disastrous for the entire economy.
The hostile exchange prompted President Museveni to invite the duo for a meeting at State House last week to defuse the simmering hostility that was threatening to explode.
In this meeting Cosase members briefed the President on their instructions to AG to have BoU audited.

Mandate
Bank of Uganda is required by regulation 4 (2) of the Financial Institutions (External Auditors) Regulations 2010 to publish a list of approved auditors by December 31 of each year from which financial institutions are required to nominate for appointment their respective external auditors.