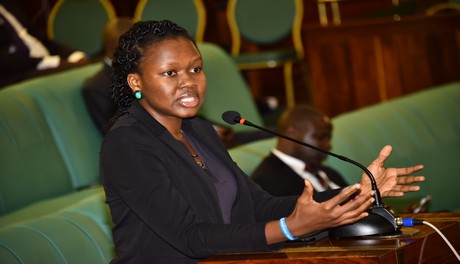 KAMPALA (@UG_EDGE) – Parliament has resolved to set up a select committee to investigate the widespread cases of sexual harassment in educational institutions.

The move followed a motion moved by the National Female Youth MP, Hon. Anna Adeke Ebaju (Ind.) praying that Parliament investigates the media allegations of sexual harassment and violence in schools and institutions of higher learning.

Recently, the Head teacher of Kibuli Secondary School in Kampala was sent on forced leave over allegations of sexual harassment.

Another media expose also exposed lecturers demanding for sex in exchange for favours from female students at Makerere University.

“This is not synonymous with certain schools because there are numerous reports of sexual violence in schools around the country,” she said.

Adeke noted that the school environment is supposed to protect girls from any form of abuse until they are out of school.

“However certain elements are using the schools to take advantage of students who are underage; we need to have an honest conversation about this issue that is biting into our society and degrading it,” Adeke added.

She added that victims are at a risk of being exposed to STDs since they cannot bargain with the perpetrators for safe sex.

“We cannot watch all these issues appear in the media and girls get impregnated by their teachers while we are doing nothing; we must act on it and investigate this vice,” Adeke noted.

Hon. Veronica Bichetero (NRM, Kaberamaido) supported the motion saying the sex is supposed to be “an expression of love and pleasure and not for sale or for exchange with favour and marks”.

“We need a stronger legal framework to protect the school going children; they are young and naive and cannot negotiate for themselves because of the master-subordinate relationships they are in,” she said.

“Victims of sexual violence are usually badly affected; they are angry and violent, they are bitter, traumatized, some have dropped out of school due to early pregnancies while others have contracted HIV/AIDS,” she added.

MPs said that lecturers traded high marks in exams for sex in institutions that are meant to be areas of conducive learning.

Hon. Anthony Okello (NRM, Kioga County) said that measures to deal with sexual violence are almost non-existent or very unclear especially in most of these institutions of Higher Learning.

Okello said that there should be a clear procedure on how to deal with these victims and also an aggressive way of eradicating the behaviour in our institutions of education.

Col. Flavia Byekwaso (UPDF) said that sexual offences are happening because the codes of conduct are not being implemented.

“When we eventually come up with punitive measures, punishment should not only fall on the perpetrators but also their supervisors because this will force them to take measures to avoid the vice going on under their watch,” she said.

The Minister of State for Primary Education, Hon. Rosemary Sseninde, said that protecting children is a shared responsibility and urged MPs to scale up sensitization of parents to report the matters to police or any responsible authorities.

“We have a decentralized system of recruitment of teachers for primary schools which is in local government but we remind them about the importance of stressing sexual offences when recruiting,” she said.

“We must also encourage the students who are victims to speak out whenever they are met with such a situation,” she added.

The Speaker, Rebecca Kadaga said that Parliament needs to map out the country and sample some schools and tertiary institutions in all regions. She also said that she hoped a list of errant teachers would be published one day. —— AUTO – GENERATED; Published (Halifax Canada Time AST) on: April 13, 2018 at 04:30PM