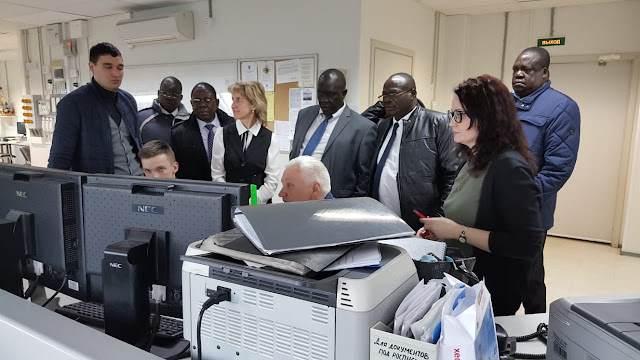 One of the suggested areas of cooperation among many was cooperation in the Water and Environment Sector.

As a result of the meetings, the first Uganda delegation from the Water and Environment Sector arrived in St Petersburg on Monday 23 April 2018 for a five day business visit with officials from Vodokanal which is the company responsible for water supply and waste management in St Petersburg, Russia.

The delegation is led by Eng. Aaron Kabirizi, Director Water Development at the Ministry of Water and Environment.

The delegation met the Vice Governor of St. Petersburg, Mr Oleg Aleksandrovich Markov who assured the delegation about St. Petersburg readiness to cooperate with Uganda in several sectors including; Water and Environment, Health Sector, Education, Tourism and Hospitality, Transportation, Construction among others.

He welcomed Uganda to suggest areas of interest to them and they will be happy to partner with Uganda.

Mr Markov also mentioned that it would be important for Uganda and St Petersburg to sign a memorandum of understanding as a framework for cooperation.

The Vice Governor also suggested a city to city cooperation between Kampala and St. Petersburg.

Uganda and Russian hold Joint Permanent Technical Cooperation meetings annually and this coming May 2018 the meetings will be held in Moscow.

This will provide an opportunity to consider and sign a number of Memorandums of Understanding between different sectors in the two countries.

The delegation held extensive discussions with the officials of Vofokanal, visited South-West Water Treatment Plant, Visited the Island of Valaam to look at the technical solutions for water treatment and Waste water treatment for small settlements.

The delegation also visited the Water academy which will be opening in September this year.

The management of Vodokanal and the leadership of the Governor’s office in St. Petersburg have invited Ugandans students to join the academy and are looking forward to receiving them this September.

The Memorandum of Understanding will consider issues of training, technological transfer, technical support among others. —— AUTO – GENERATED; Published (Halifax Canada Time AST) on: April 27, 2018 at 02:08PM