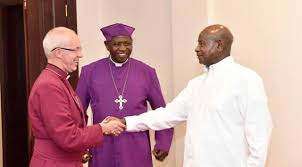 Religious leaders have a great role to play in the fight against impunity and mediocrity combined.

*Reminder:*
((Archbishop of the Church of Uganda His Grace Stanley Ntagali urges religious leaders to stop meddling in political situations in the country  because it is not among their calling, Ntagali said.

The House of Prayer Ministries lead *Pastor Aloysius Bujingo Guhunahuna* praises the special Forces command (museveni’s private guards)  for the job done of Brutally beating  legislators Robert Kyagulanyi a.k.a Bobi Wine, Francis Zzaake and others in the Arua campaigns and  vowed to organize a party if both are subjected to life imprisonment.))

In the ensuing days of unrests, torture of peace and justice loving people, high  level intentional brutality and killings and abuse of offices, it’s unfortunate and uncalled for to see otherwise decent religious leaders running  to defend the mediocrity and outright stupidity, and brutalising rule of Dictatorship, a thing that doesn’t reflect the spiritual moral fibre. Shame!!

In miserable times like this, churches should be the epitome of hope and encouragement to the suffering  common man, unfortunately, gone are the days!

This is not the Church that St Paul envisaged when he wrote 14 Letters to the Elders in various provinces.
The Church must redeem itself, by first, rejecting to be sold to and associated with mediocrity and Dictatorship, denounce evil, refuse being compromised and confront the real problem!!

Did you find apk for android? You can find new Free Android Games and apps.
Sharing is caring:
politics, religion, UGANDA Religion, Uganda, Politics No Comments » Print this News

RELIGION: Anointing of the Sick

UGANDA: Men of God fighting each other, competing for clients to consume distorted teachings