There is an earlier video (Feb 9, 2018) where this Pig is threatening the King and people of Ankore. You can hear her saying she is a Military person and will use the gun to force Ankore to give up their land. She then says “if I were you I would sell the land here and go buy elsewhere”.

Like all thugs in Museveni’s dictator regime, this witch does not care that she was being recorded. Now she claims he is not king when her mission is to take land by force so Museveni can build another barracks to terrorise Ugandans.

Is it Mukwaya or Museveni who created the Ankole Kingdom? These buffoons were not even born when Ankole kingdom first existed. Ugandans must remember that Museveni massacres those who disagree with him.

Remember Rwenzururu and Kasese. He killed millions of Acholi too and now do you hear a sound from their elders? Buganda is next. Then Busoga. Then Bugisu. Then you. Yes..one day they will come for you too. 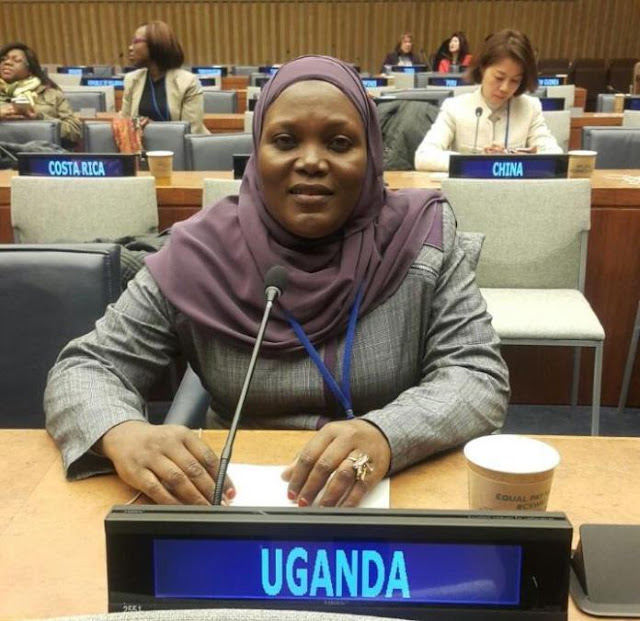 Following our revelation last week that meetings were held on February 8, 9 2018 between this so called Paramilitary Bully Minister, it has surfaced today that she has ordered the regime cadre, notorious Chemical Ali (Gen. Kale Kalyekezi) to arrest the King.

Tantamount to what is blackmail, violation of Human Rights and abuse of power, we fear that the regime may do a KASESE on Ankore kingdom. The row is not only over the land the regime DEMANDS to take by force to build another barracks but that the King has no powers as King of his kingdom for his people.

What we know is that President Yoweri Museveni, through this Janat Mukwaya are now accusing the king of grabbing land when the woman is on record commanding the King to sell land and move elsewhere. The regime would rather have a Munyarwanda as the king instead of this authentic Ugandan.

Museveni prefers Rwebishengye , Son of Barigye, son of Sir Charles Godfrey Rutahaba, son of Rwakatogoro , son of Nkuranga son of maparanga who are 100 % Rwandese. These people are now grabbing land in Isingiro, and at the end of the day they will say it was King Asiimwe who grabbed the land. They had even become kings through the East African Parliament during colonial times , when Ntare V was poisoned by these very Rwandese.

Ntare V’s descendants went into exile under the Rwenzori Mountains where Ntare V’s wife was born. Now the Kings are back to Ankore and Museven could not believe his eyes. If the regime goes ahead and wages a war against the people of Ankore, it will be Museven’s down fall. After committing a genocide on the people of Rwenzururu, he should not make a mistake to attack another defiant kingdom.

The following video clip contains 6 audio clips which were spliced together from the two day meetings where the bully minister threatens the king with many people in attendance. The link to the first story is also included.

Uganda government is going to force people in Ankore off their land to build a barracks and only heaven knows what else. The Minister for gender, labour and Social development, Janat Mukwaya is threatening them in this video clip which is a combination of 6 short audios received from Uganda.

Below is a report by one of our sister news sites in Uganda (Edge).

The Minister of Gender, Labour and Social Development, Janat Mukwaya, has directed the Inspector General of Police General, Kale Kayihura, to arrest the self-proclaimed King of Ankole, Umar Asiimwe Rubambansi.

“The IGP and law enforcement agencies are informed and directed to take appropriate action,” Mukwaya said in a communication to Kayihura.

She said the ministry doesn’t have any communication in writing that the supporters of Asiimwe followed the procedure to enthrone him.

Now labelled an impostor, King Rubambansi is already being monitored by police in Mbarara district.

Rubambansi along with his cabinet was questioned by the minister at Lake View Hotel in Mbarara town at the close of last week.

“I’m telling the people in Ankole that Umar is an imposter. He did not follow the law— set by the Cultural Leaders Act (2011) under article 246(1) that provides the process of installation of a traditional or cultural leader,” Mukwaya told press after the meeting.

She accuses Rubambansi of mobilising people for the restoration of the kingdom that was banned by former president Dr Milton Obote.

“Let them register with the ministry of Internal Affairs as traditional healers like the Bachwezi,” she mocked.

The minister promised that if Rubambansi declares himself a traditional healer, then police and other agencies will not bother him. UGANDA: Why Museveni needs no lecture in politics