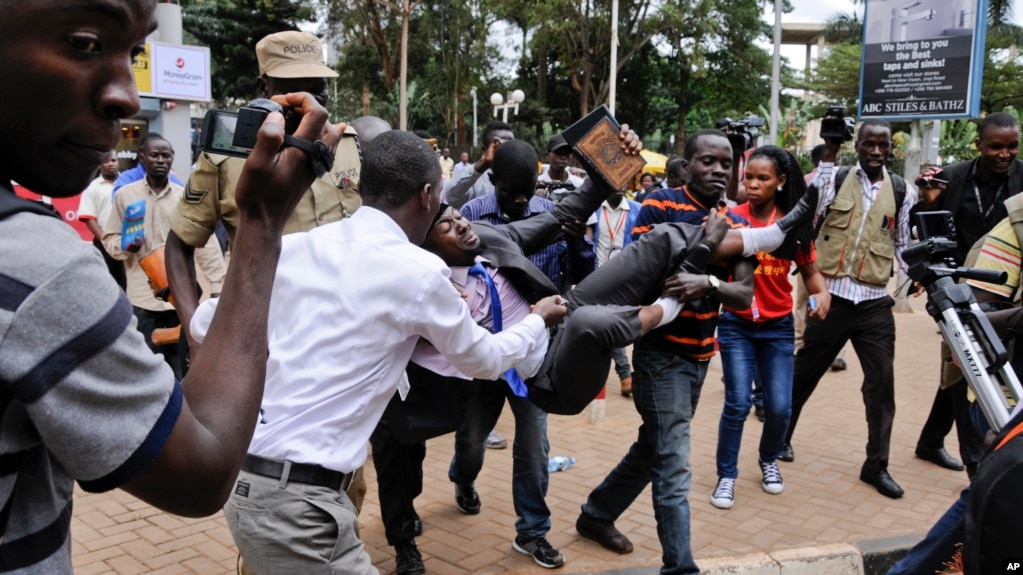 FILE – An activist opposed to the extension of presidential age limits is arrested and carried off by uniformed and plain-clothes police, while shouting for America and Israel to come to the rescue of Ugandans, near the Parliament building in Kampala, Uganda, Sept. 21, 2017.

MARTHA LEAH NANGALAMA – THIS IS NONSENSE. Museveni’s regime has been holding people beyond the 48hrs with no charge for the whole 32 years this government has been in power. Some people are even held for up to 13 years with no charges.  The constitution does not apply in Uganda and people must stop fooling themselves thinking there are any laws.

On the other hand, Ugandans and the world need to know that the legalisation of 48hrs extension is solely to stop challenges from time to time of suspects’ lawyers.  In addition, the holding without court appearance for 48hrs is to allow for the torture wounds to reasonably heal before people are presented in court.  The extended holding time allows for more brutalizing of suspects to force confessions out of them and if they are then too hurt, one cannot walk them into court the way we saw those Moslems limping to court with open wounds.  WAKE UP PEOPLE!

KAMPALA (VOA) — The Uganda Police Force is facing stiff resistance over a proposal that would allow officers to hold suspects beyond the maximum of two days before they are granted bail or appear in court. While police say the change will only affect terrorism suspects, opponents say those accused of petty crimes will be held longer too.

Police say certain crimes, such as terrorism, require cross border investigations to acquire evidence and witnesses. Authorities are seeking support from parliament to amend Article 23 of the Constitution so that police can hold terrorism suspects for seven to 14 days before producing them in court.

Patrick Onyango, the deputy spokesperson of the Uganda Police, said sometimes, analyzing samples picked up at crime scenes needs time because “for us we also use another government analytical laboratory. They also need time.”

“Sometimes they say, ‘we are overwhelmed with … the samples you bring to us.'” he added. “So we were requesting, members of parliament, that in certain cases they need to amend the constitution to allow us to keep suspects for at least more than 48 hours.”

Before the proposal can advance, it must receive support from the Parliamentary Human Rights Committee. Jova Kamateka, who chairs the committee, is skeptical. She said police already flout the rule.

“They have failed to honor the rule in small, small cases,” she said. “And we think that even the rule as it stands now, you can take a suspects to court and say you are not ready, and ask for extension. Secondly, our police cells — we don’t have that much space.” 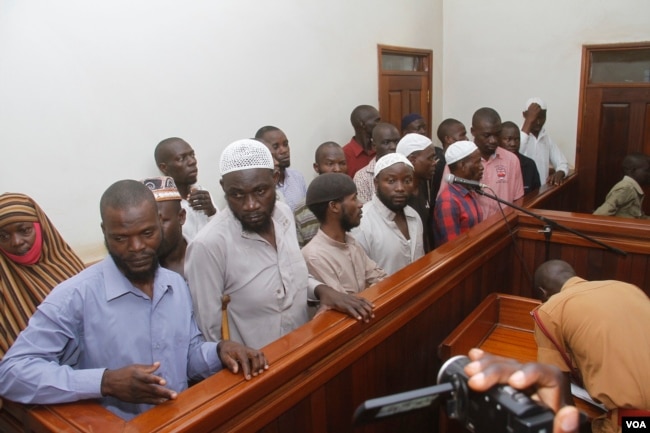 FILE – Murder suspects in the killing of Ugandan Police Commander Andrew Felix Kaweesi stand behind the dock at the Nakawa Chief Magistrates court in Kampala, Uganda, May 18, 2017. (H. Athumani/VOA)

Last year, as police investigated the murder of Felix Kaweesi, the former assistant inspector general of police, suspects spent more than five months behind bars without appearing in court.

Several other suspects, including opponents of President Yoweri Museveni, have also been held in police custody for more than 48 hours before appearing in court or being granted bail.

The Uganda Human Rights Commission, a government body, has continuously faulted police for ignoring the rule. The chairperson of the commission, Meddie Mulumba, said any effort to thwart terrorism should uphold fundamental principles of human rights.

“Yes, we abhor terrorism, we abhor violent crimes,” she said. “But we are saying police should be facilitated, should be trained, should use scientific methods of investigations. What is it that they want to do in the police cell without scrutiny of the public that they cannot do in a prison? Because, all we are trying to say, arrest this person, in 48 hours, take this person to court, this person is remanded.”

Police maintain that as long as investigations are ongoing, suspects in what they consider sensitive cases will stay in custody to prevent new crimes from being committed.

Did you find apk for android? You can find new Free Android Games and apps.
Sharing is caring:
crime, politics, UGANDA Uganda, Crime, Politics Comments Off on UGANDA: Regime seeks to change constitution, hold suspects longer than 48hrs with no charges Print this News

UGANDA: Latest on #Coronavirus from Uganda media and govt