What you need to know about new directives on SIM swaps, replacements

KAMPALA (DAILY MONITOR) – The new requirements include production of a valid police report, presentation of a letter from NIRA validating that a SIM card holder’s national ID card is authentic, re-registration of the applicant for a SIM card by the telecommunications operator using biometrics and a passport photograph.

Other guidelines are issuance of fresh SIM card registration form and ensuring that the SIM card holder shall be using the SIM card in a genuine type approved device.ADVERTISEMENT
By Monitor CorrespondentGovernment through the Uganda Communications Commission (UCC) has issued new requirements for the SIM card swaps and replacements barely a month after it suspended the process.

Early this month, UCC announced a ban on the application of new SIM cards and SIM swaps pending the installation of the Application Programming Interface (API) with the National Identification Registration Authority (NIRA).

According to UCC, API is to ensure real time, accurate verification and validation of SIM card registration information by NIRA.
“However, to mitigate the exceptional circumstances being experienced after imposition of the ban, UCC has instituted interim measure under which SIM cards can now be swapped and/or replaced,” the Commission’s spokesperson Ms Pamela Ankunda, said. 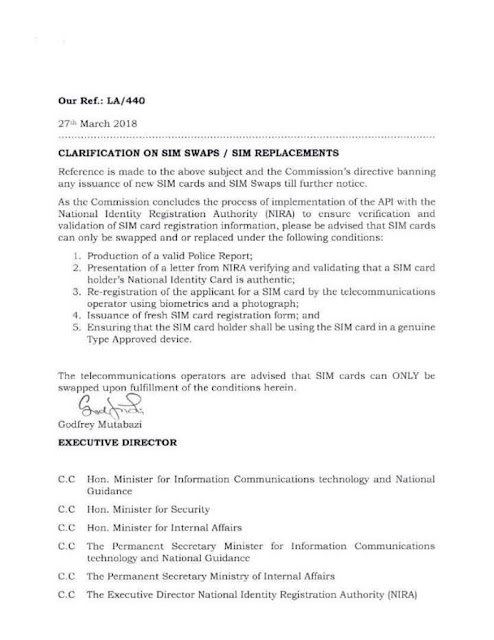 The new requirements include production of a valid police report, presentation of a letter from NIRA validating that a SIM card holder’s national ID card is authentic, re-registration of the applicant for a SIM card by the telecommunications operator using biometrics and a passport photograph.Other guidelines are issuance of fresh SIM card registration form and ensuring that the SIM card holder shall be using the SIM card in a genuine type approved device.

“All telecommunications operators have been notified to issue SIM card swaps or replacement as per the directive communicated to them,” a statement by Ms Ankunda on March 27, 2018, reads in part.

“NIRA verified every National Identification Number (NIN) in their system but some people used other people’s NINs to register their phones. Now, we have empowered people to check how many numbers are registered against their NINs using the 197 code. If you have numbers you don’t know, then the operator switches them off,” added Ms Ankunda. 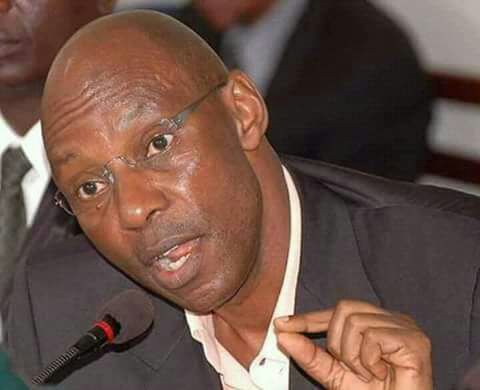 ENG. NSIMBE… This is one of the most academically qualified Ugandans i know but am afraid he is either disconnected from reality after holding VIP status for over 20 years or its his juniors taking decisions and his job is just to sign!!!..
… He first endorsed a 200bn mobile lines registration already knowing that many Ugandans use disposable phones that are not traceable!!..
… He later tried endorsing an IMEI number registration for each device. A move that wasn’t bought by the cabinet for its expense both financially and time wise with another another backdoor being that an IMEI NUMBER can be changed in a minute!!
… He banned the sale of all scratch airtime cards on unclear terms well knowing that even the biggest known economies are still using the same not forgetting thousands who are employed by the sale of the said cards!!
.. He has today suspended licenses of over 20 radios for promoting witchcraft but has avoided the real calprits in this just like the way  he left airtel operate over 3million unregistered mobile lines..
.. Am afraid he may instruct us to resit our PLE if his family member gets any problem due to criminality!!!
KABANAGA: Then if he’s one of the most academically qualified Ugandans in top seats then it’s an insult to the rest of us because if you learnt in top level, you don’t need to be on ground to understand certain things.
NANGALAMA:  When I warned about the ulterior motives of the Simcard registration in the beginning, did anyone care? It was not only about the regime fleecing Ugandans out of money to pad Museveni’s pockets ahead of the #Togyikwatako but it was also:
1) Yes, to generate money for the thug broke regime.  Were you not paying each UGX 50,000 just to register your SIMCARD?  Just out of the blue you agree to give the regime that much money?
2) To expose surveillance and what lies ahead for Ugandans.  Yes, to keep an eye on all your movements and actions, spoken, texting, etc.
3) To get ready to yank you off social media where some of you (most of you) are known to post nonsense.  Were it for politics, social justice, education, employment, projects, it would make sense but seriously some of you just post nudes from your ex slay queens or sugar daddies.
4) Was to expose inefficiency and incompetence at UCC.  DAMN GOOD too.  Have you seen the school drop outs who run UCC?  They are like chicken with their heads cut off. They do not know if they are coming or going!
5) To prepare for CCTV camera installations and to take your DNA.  Well, maybe these two things are not related to the SIMCARD but chances are you have a phone that will be tied to that camera on he road that is recording you and chances are your DNA will be inserted into NIRA, Interpol and next thing you know, your phone will buzz that you are the father of some 8 kids in Busoga and you will wonder how it came to be.  BE prepared for Child support buddies!

Police in greater Masaka are investigating circumstances under which a taxi driver was kidnapped and killed near the Kabaka’s palace around Nkoni-Lwengo district.

The deceased was identified as Muhammad Tamale alias Nazigoba, resident of Lusango in Lukaya town council, Kalungu district.
Police says that the assailants first stole the deceased’s phone and called him on Monday morning informing him that they had picked it and ordered him to get it from them in Masaka town.

His fellow drivers who preferred anonymity say that they last saw their colleague early Monday morning after he told them that his phone was picked by some men who later told him that they were in Masaka town and was on his way to meet them.
“He took his car for cleaning and decided to walk on foot to pick his phone, and the next news we got was of his death,” one of the drivers said.

The officer in charge of Nkoni police post AIP Martin Emudud confirms the death of Tamale.
“I reached the scene and found the cell phone near the body where it was placed which I used to call his family members to inform them of what had happened,” Emudud said.
Residents of Nkoni told police that they saw a salon Mark II type standing where the body was found but never paid attention to it.
The Southern Police spokesperson Lameck Kigozi says that the hunt for the assailants is ongoing.

The registration of all SIM cards emerged following the killing of 28-year-old Susan Magara after her kidnappers had used at least 17 different SIM cards to contact her family as they solicited and negotiated a ransom.
Some of the SIM cards were reportedly unregistered and in other cases registered in names different from those of the owners, making it difficult to trace the accomplices.
UCC also revised its directive on SIM card ownership and issued new guidelines to telecoms with an individual only allowed to own not more than 10 SIM cards across all networks. Failure to observe the guidelines will attract punitive sanctions from the commission.
Did you find apk for android? You can find new Free Android Games and apps.
Sharing is caring:
crime, murder, kayihura, museveni, ucc, social media, internet, sim card, nira, kidnap, Tumwebaze, mutabazi, Ransom, NRM thugs, Henry Tumukunde, Information Access, Registration News, Technology, Crime, Politics No Comments » Print this News