UGANDA: Rainfall outlook for May through August 2018 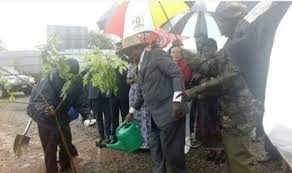 THE SEASONAL RAINFALL OUTLOOK FOR JUNE TO AUGUST 2018 OVER UGANDA 1.0 OVERVIEW
The June, July and August forecast period is generally a continuation of a rainfall season for much of northern Uganda but part of a dry season over most parts of south western, central, Lake Victoria basin and some parts of eastern region. It generally marks the end of the first rainfall season for the southern sector of the Country and is usually a crop harvest season.
During the 49th Climate Outlook Forum for the Greater Horn of Africa held in Djibouti, from 13th– 14th May 2018, the National, Regional and International Climate Scientists reviewed the state of the global climate system and its implications on the seasonal rainfall over the East African region. It was observed that the major physical conditions likely to influence the weather conditions over Uganda and the rest of the east African region for the forecast period of June to August 2018 are as follows:
https://ift.tt/2sd0WWD