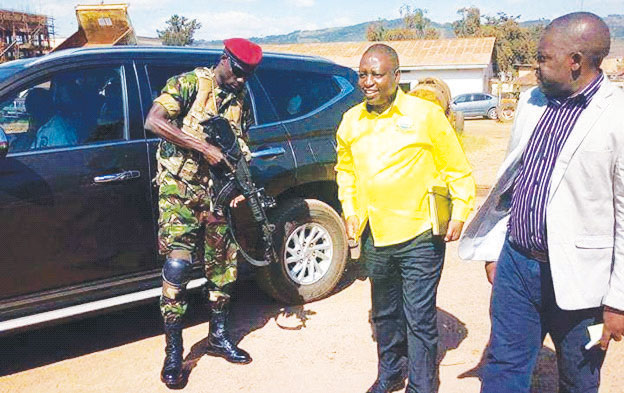 THE OBSERVER – Any police officer who deliberately refuses to protect a member of parliament now faces the risk of unspecified action being taken against him or her, authorities have warned.

The warning follows reports that a number of police personnel are absconding from bodyguard duties, citing poor treatment by MPs they were assigned to protect.

But even as the warning was being sounded days ago, some MPs observed that close protection officers are not the answer — given the rising wave of insecurity sweeping through the country.

Deputy police spokesman Patrick Onyango told The Observer last week, “If anybody withdraws from guarding the principals they are supposed to guard, the unit commanders are supposed to take action against them”.

“An officer when going on duty is supposed to prepare so as they are guarding the MPs, they should be prepared with all the necessary equipment and logistics. Logistics means food,” he said.

“In police training schools, there is a whole topic on officers’ survival skills; how do you survive in an environment? So, they should go back to the basic lessons they were taught at the training school; they know they are supposed to be equipped for whatever condition.”


Onyango was responding to reports coming out of a June 28 security briefing between MPs and President Museveni. At this meeting, the president reportedly warned that whoever refused to work with MPs would be sacked.

The police publicist also said that the top management of different security agencies will come up with appropriate measures to enhance MPs’ security.

The briefing held in the prime minister’s office ended with Museveni directing that MPs be assigned military guards after learning that police personnel were absconding over lack of facilitation, among other reasons.

Interviewed separately, one guard said: “You see some of our people [MPs] go to expensive places to shop or eat. You are guarding them and you can’t go elsewhere to buy yourself something to eat. Even at their homes, they don’t care whether you have eaten or not. Some of them can’t even buy water for a person guarding them; how do you continue with such work?”

“Many of our colleagues are suffering with the MPs they guard. Some of them have requested to be redeployed because they find it very hard spending most of their time with selfish people,” the officer said.

Obongi MP Hassan Kaps Fungaroo last week confirmed these MPs’ fears and reservations about the usefulness of riding in the same car with their guards.

“MPs admitted that they are living in a state of fear. Even those given security by the president said police are running away. That the [police] say instead of escorting MPs, they better stay at home because escorting an MP is a very risky business for them,” he said.

“The president said they shall make a provision for separate vehicles for the escorts which means there are going to be over 452 escort vehicles loaded with soldiers and police because the police feel that they cannot protect the MP properly when they are in the same vehicle,” Fungaroo said.

A slightly different account of this proposal was given by the secretary of the ruling party’s parliamentary caucus, Joseph Kasozi Muyomba (Bukoto Mid-West), who said it was agreed the National Security Council would decide the issue of separate vehicles.

“Because if you are together with the guards in the same vehicle, you are all vulnerable; so, it will be either to have a separate vehicle behind or ahead. But it will be for a short time, like four to five months, due to the difficulty in mobilising logistics to facilitate the guards,” Kasozi said.

“There were reports that police escorts were in fear so the president ordered that the police can be withdrawn from those who feel they should be guarded by the army… But it’s not mandatory that all MPs will have soldiers guarding them,” Kasozi added.

Separately, some MPs have criticized the push for military guards and separate vehicles.

Ruhinda representative Donozio Kahonda, who supported the bill, said: “…when I was campaigning, I never had any security, why should I go now to my constituency with guards, for what? I am aware there is insecurity in the country but having them is insecurity whereby even somebody who didn’t have interest in knowing who is having escorts will target you.”

“Some people feel too big because there are two guns around them,” he said. “This disease of bigness has infiltrated parliament. MPs saw it from ministers, now they have also been caught up in this disease. Next they will say we need to be escorted the way ministers are escorted; so, it is a fashion”.

Instead, Komakech advised the president to look into the root causes of insecurity.

“How about other Ugandans? Arming MPs to the teeth like we are going for war is going to be like South Sudan where everybody is escorted to his small hut. It’s going to be a theatre. It’s a vote of no confidence in MPs,” Komakech added.

Characteristically, Lubaga South MP Kato Lubwama saw the lighter side to things, pointing out that “some MPs have no vehicles, they move on foot. Will they have guards driving while they are walking because they supported the age bill?”

Kisoro Woman MP Rose Kabagyeni, Kaberamaido MP Veronica Isala Eragu Bichetero and Ruhinda MP Donozio Kahonda argued that it was unbecoming behavior for some of their colleagues to mistreat their escorts.

Kabagyeni said it is inhuman for an MP to have lunch and leave his or her guard to go hungry.

“It’s unfortunate that some people always tend to forget that we do what we do because of the people around us who help. This person must motivated to do their work so you are able to do your work as well,” Kabagyeni said on Monday.

“I urge all those who use these categories of support- guards, maids, messengers and drivers that whatever you are doing, just know that this person adds almost 60 per cent to your success. It is sad and inhuman for someone to mistreat the people around you…,” Kabagyeni added.

“Those [police guards] who leave their duty stations should be charged with cowardice in action. That means they did not train well, they didn’t grasp what they were trained for. But I regard my subordinates as part of my family; therefore, even if they are guarding me, they must share the same meal we eat at home and if we go to a restaurant, they must eat from the same restaurant..,” Kahonda said.

Isala- Eragu said, “It’s really shocking and shameful. Personally, I will never deny an employee anything they deserve. I cannot come out with a stomach full when my staff are famished.”

She urged the Parliamentary Commission to intervene.

Chris Obore, the director for communications and public affairs at parliament, said, “Parliament does not have a budget for MPs’ escorts. That is the duty of the police and if I remember, police has VIP [Very Important Person Protection] Unit,” Obore added.

If the MPs can’t stand the heat (life-threatening occupation) they should quit the kitchen.

In other words, they are the cause of their own fear for life. Nobody wants to kill another person or anybody for apparently no reason.

As somebody put: you are still alive because nobody wants to kill you.

Does Mr. M7 have all the security details because Ugandans and the world love him so much? No.

In all honesty, it is because he has hurt so many people, who want to get at him.

Since we shall all die, I wonder why these Mps and Mr. M7, are afraid of being killed.

Too many guards can not save you. At the appointed time we all quit the stage regardless.

Let MPs stop these selfish trade offs with HE and the public might once again gain confidence in them.

Extra protection is not a panacea for their security. Will they also go with that security to their constituencies the next time they need votes?

Did you find apk for android? You can find new Free Android Games and apps.
Sharing is caring:
politics, UGANDA Uganda, Politics Comments Off on UGANDA: Policemen fearing for their lives refuse to guard greedy useless MPs Print this News