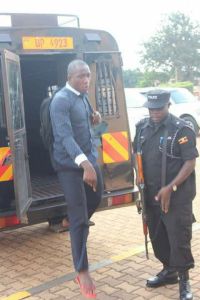 MUHAMMAD KIRUMIRA – Now that Nalufeenya has been closed after numerous public complaints, where should we lodge our complaints as victims of illegal detention?!

That place had been reserved as a convenient place for keeping suspects who would not be acceptable in the gazetted or official police units.

Only special units that had been curved out of CID, crime intelligence and operations were allowed to detain there suspects who used to have terrible injuries obtained during administering of torture from various parts of the country.

Nalufeenya of late had become a dumping ground and torture had been restricted only for inmates to suffer very long detentions ranging between a week to several months.

Since suspects were not allowed to see the outside world it would force him to reveal what he knew or accept what he didn’t know after being convinced that he would earn a release there after which could further earn him or her more trouble instead.

Several officers senior in rank especially those who didn’t belong to the special groups like special operations unit, flying squad, and other special special as I complained earlier were opposed to this kind of confusion but their voice could not be heard.

Already the FORCE had been divided into two the favoured( minority) who included OFFICERS recruited between 2007 to 2015) and the none favoured.(majority) who were called colonial etc recruited 2005 to below with just exception of some few who were picked from among them to support the minority JUNIORS .

Take a look at all major positions of responsibility before the changes were effected, were occupied by officers with less than 10 years experience where as their counterparts were deployed in non-existent departments.

Indeed I’m grateful for its closure now but my question is where do victims complain and whom do they sue, because prior to the closure it used to be called the Special Police Division headed by Asp Rutambika deputised by Asp Amos as deputy commandant?!

Should we say these were working on their own or on behalf of the POLICE?!

Lastly who is responsible for the actions of operatives of the flying squad many among whom are former rogues?!

Respect for Human dignity had been totally forgotten whether you were a cop, a political leader a cultural leader or a religious leader, so long as you were detained in Nalufeenya you would suffer humiliation.

I will highlight these things so that the government further reflects on human rights observation, rule of law, constitutionalism and good governance required of a sovereign state not to be taken advantage of a few scenarios which taint the image broadly.

Some of you who feel less concerned wait for your turn then you will look for my number.