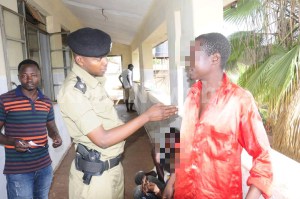 The machete-wielding men that have been waylaying unsuspecting victims in Gangu, Kibiri, Busabala and Katwe have been arrested.

The suspects have been identified as Farouk Keya alias Benja Mosh, Steven Muwanga alias Doobozi and Benja Musisi alias Mandwa. They have been charged with aggravated robbery under case reference 23/30/03/2018.

The suspects waylaid five victims with machetes, tying them before stealing their property.

Some of their victims suffered bodily injuries on the 28th and 29th March 2018.

Before the attack, one woman who was cut several times and left almost dead received leaflets reading “today is yours expect us anytime”, but she didn’t alert the authorities. Her family rushed her to hospital and she is steadily recovering.

With the help and cooperation of the community members, a thorough investigation was carried out and fingerprints lifted from the scene revealed some of the suspect’s identities. They were traced, arrested and upon search, items including pangas, clothes, bed sheets soiled with fresh blood and sim cards belonging to one of the victims were recovered from their houses.

The suspects have been positively identified and a full confession in form of statements obtained from the victims. Published (Halifax Canada Time AST) on: April 05, 2018 at 01:21PM

PARENTING: Something magical about borning a baby