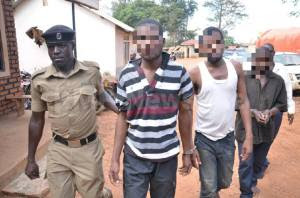 KAMPALA (@UG_EDGE) – Police in Kasangati has arrested three suspects for allegedly murdering a business woman with intent to take control over her three plots.

For a long time Mugambwa had been a great confidant to his sister that they always shared every good thing in life together.

Little did she know that the brother was trying to build trust as part of the bigger plan.

For the past few weeks Nakato confided in the brother on how she intended to sell her plots of land so that she could acquire another close to the city.

A fully coordinated plan was hatched by Pius Mugambwa together with his colleague Kassim Mpalanyi and made calls to the deceased to get ready to meet the land buyers.

However the actual plan according to the confession made by the suspects states that the main intention was to eliminate her and distribute the plots amongst themselves once the mission was complete.

Mugambwa Pius was to assume ownership over the two plots in Mpoma, the colleague was to be awarded with one plot located in Bukerere and the driver to be paid a sum of one million Uganda Shillings.

Since Nakato had been convinced that she was going to meet the buyers, the brother told her to come along with all the sales agreements so that the deal could be sealed however at the back of their minds knew they would gain full ownership having access to the original documents.

The suspects hired a Premio vehicle registration number UAK 824H which was being driven by a one Sunday Nsubuga.

However before picking up the deceased, the trio made stopover and Mpalanyi who is also a property broker at Infinity Properties and Brokers Limited picked up a black backpack which he kept in the rear seats.

Nakato was picked up around Namugongo Shrine at 3p.m. and according to the suspects she was seemingly excited that she would finally find a buyer for her plots of land.

Few miles later, Mpalanyi pounced on her and began to strangle her while the brother held the legs to weaken her.

After a long scuffle Mpalanyi drew out a hammer out of the backpack and hit her five times on her head killing her instantly.

He then told the brother that the only way to cover up the murder was to rape the deceased so that the crime would tend to be just like other reported cases of women murders for he thought this would make it hard for the investigators to solve the murderous act.

The brother together with Mpalanyi took turns by having canal knowledge with the deceased body and dumped her in Kakelenge, Matuga Kasangati Subcounty in Wakiso District.

Mpalanyi who then felt he had played the biggest part in the mission decided to carry with him the deceased’s phone, and sales agreements.

On returning the vehicle back to the washing bay, the workers (kanaabe) realized that there were blood stains all over however Nsubuga claimed it was chicken blood that was left by witchdoctors during the journey.

The concerned citizens rushed and reported at Kanyanya Police Station who responded, impounded the vehicle and arrested the driver.

Blood samples were taken to Government Analytical Laboratory (GAL) in Wandegeya which revealed these were human blood stains.

This acted as a perfect lead for the investigators to net the actual suspects.

On search at the home of Kasim Mpalanyi, the phone belonging to the deceased was recovered, a story book containing the names of her son and two sales agreements were recovered.

One original sales agreement containing the names of the deceased was recovered together with a duplicated one indicating that she has sold her plots to someone else.

« NIGERIA: Govt rescues more than 1000 from Boko Haram (Previous News)
(Next News) UGANDA: Student self kidnaps to get ransom from her mother »

UGANDA: Student self kidnaps to get ransom from her mother