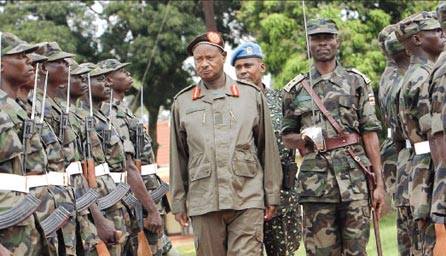 CHANGE OF GUARDS – Museveni claims to have built a disciplined army different from the past armies which used to rob and rape women. During his five years’ Bush War, one victim accused of rape is reported to have been put on firing squad.

It’s now 32 years since coming to power and rape, sexual abuse and exploitation of women by soldier is one of the top accusations repeatedly levied against his army. In May 2017 Human Rights Watch and the UN Office of the High Commissioner for Human Rights released a report implicating his Soldiers serving under the AU in CAR in rape and sexual exploitation. Several incidents covering the period between 2015 and 2017 were cited. The army reportedly launched an investigation but its findings have never been made public. Two junior soldiers serving in CAR were reportedly to face the army court over rape but the matter was simply swept under the carpet.

In 2014 Human Rights Watch had released a report implicating the Museveni army serving under the AMISOM in Somalia of rape, sexual exploitation and abuse of Somali women seeking water and medical care from the military base. As usual the army dismissed them as baseless. In September 2015 a junior soldier, Raphael Olinga of AMISOM raped a 16 year old Somali girl whom he found grazing goats. Three years later, last week the kangaroo army court in Kampala found him guilty of the same rape and sentenced him to dismissal with disgrace from the army.

Owing to poor welfare and unfair term and conditions of service, most of Museveni’s soldiers who serve under AMISOM and manage to earn good money often wish to leave service. For Pte. Raphael Olinga, this was a golden opportunity because a one month pay under AMISOM is more than retirement benefits of a junior soldier. Punishment is meant to deter crime.What about the case of an officer Lt. Brian Lusabe who in November 2016 ambushed two women in the evening near his residence in Ntinda, forced them into his residence and raped them? How come he was not charged before the Court Martial but was taken before the Magistrate’s Court which remanded him to prison? What happened when the accused clocked the constitutional 360 days on remand before being committed to the High Court??? The truth is that the regime was avoiding publicity and looking for ways of getting him off the hook. Why would a commissioned army officer at the rank of a Lieutenant and most likely a university graduate with a personal house in the posh suburb of Ntinda way lay women near his residence and rape them?????

Reports of Museveni’s soldiers raping women during the Northern Uganda insurgency and during military expeditions in Congo were always dismissed by the regime.

LIBRARIANS: What does a librarian do? EVERYTHING

UGANDA: Museveni’s relationship with Kagame is similar to that of Gen. Sejusa