UGANDA: Museveni blames malaria on laziness of his health ministry 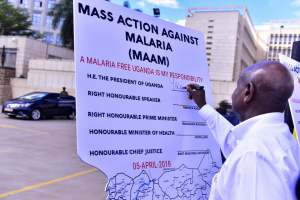 KAMPALA (@UG_EDGE) – President Museveni on Thursday launched the Parliamentary Forum on Malaria and the Mass Action against Malaria at the parliament of Uganda.

Speaking at event, the Deputy Speaker Jacob Oulanyah said the President is launching a war on malaria but there is also need to look at the cause which is the mosquito.

In his turn, Museveni said unlike some of the other biological enemies, one can kill both the mosquito and the protozoa which are causes of malaria.

Dubbed “Kick Malaria Out of Uganda”, the campaign is a voluntary initiative to fight malaria by Ugandan Members of Parliament.

Museveni thanked the development partners who have contributed to the malaria fight, like the US and UK governments, the World Health Organisation and the Global Fund.

“The US, for example, gave us dozens of millions of nets. When you talk of malaria, you are talking of two living organisms. One is an insect and another is a protozoa. The insect is the mosquito, the protozoa is the plasmodium. Unlike some of the other biological enemies we have, these are killable, you can kill them both.”

He added: “Why then do we have this malaria conservation programme? We can eliminate it. We have been able to eliminate 13 diseases. Polio, small pox, and others.”

He said the problem is laziness especially by the Ministry of Health. To eliminate malaria, it needs more effort than vaccination.

“We need to kill the mosquito, how? By using treated bed nets, through residual indoor spraying every six months and outdoor spraying, although there were some controversial issues.”

Museveni said when he bought his farm in Kisozi, mosquitoes were many, but he used to spray dicatex which killed both ticks and mosquitoes.

“Once we concentrate on something and we calculate the cost benefit, then we can do it. Shs350 billion is not too much, if it is what we need to eliminate malaria.”

Museveni used the opportunity to also caution some MPs against propagating lies.

“We have told our people that the Nodding Syndrome is related to river blindness which is caused by a small fly in flowing water.”

He added: “So, we must kill that fly but also clean the bodies so that if the fly bites you, it will not find the flireria. It is why we must have mass treatment so that the germs in all of us die. Then, the flies will bite but not transmit the disease.”

The president he totally agrees with the idea of creating a fund for malaria.

“If you raise funds from private sector, the government can contribute. We could fund scientists to deepen their research. It should aim at eliminating the mosquito.” AUTO – GENERATED; Published (Halifax Canada Time AST) on: April 06, 2018 at 08:22PM