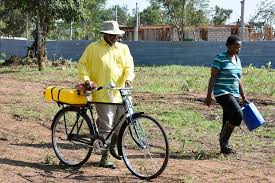 KAMPALA (DAILY MONITOR) – A school matron and boda boda cyclist have been arrested in connection with the kidnap, rape and murder of a woman whose body was found dumped at Kabaawo Zone in Mutundwe, Rubaga Division in Kampala City.
Charity Kyohirwe, 32, a resident of Masajja Parish in Makindye Division, Kampala City, was strangled to death by her kidnappers who thereafter demanded a ransom of Shs5m from her relatives. The relatives paid Shs3m, which they sent electronically.
Kampala Metropolitan Police spokesman, Mr Luke Owoyesigire, said Khasifa Nyakaisiki, a matron at a school in Kyengera and Richard Ndawula, a boda boda cyclists are detained at Special Investigations Division at Kireka, Wakiso District.
“The matron was tracked because some of the ransom money was wired on her mobile phone number. When she was arrested, she led us to Ndaula whom she said he masterminded the ploy,” Mr Owoyesigire said.
READ: Kidnappers demand money for girl’s body

Nyakaisiki, who is married, is said to have had an extramarital affair with Ndawula, who confided in her the kidnap deal.
It is alleged that Ndawula and another boda boda cyclist, who is currently on the run, kidnapped Kyohirwe on the night of March 23 as she returned from prayers.
ALSO READ: Man watches helplessly as his pregnant wife is killed

The suspects reportedly raped her and then strangled her to death because she had identified them. Both cyclists operate in Makindye where the deceased lived.
They are alleged to have picked the deceased’s mobile phone and called her relatives demanding for a Shs5m ransom.
Unaware of her death, Kyohirwe’s family pleaded with the kidnappers to give them more time to get the money.
The kidnappers warned the relatives against involving police.
The relatives informed Katwe Police Station that started tracking the suspects on the victim’s phone. The kidnappers switched off the phone which made it hard for the police to track them.
On Saturday morning, however, Kyohirwe’s body was found dumped in Rubaga Division.
At midday, the deceased’s number was switched on and a tracking system traced it around the Old Taxi Park in Kampala and later in Kisenyi.
Related content
The detectives failed to track the suspect, who switched it off a few minutes later.
They then embarked on tracking one Pamba whose identity card was left at the scene. Pamba was arrested, but he said his card and other properties had earlier been stolen.
Police verified his claim and found him innocent. He was released before police started tracking Nyakaisiki’s phone which had recived part of the rasnsom money.
Cases of kidnap and murder are on the rise in the country.

« UGANDA: Plot to rob and kill tourists, investors – OpEd (Previous News)
(Next News) UGANDA: Besigye says Mbabazi should have been elected president – HAS EVERYONE AT HOME GONE MAD? »