UGANDA: MPs praise Winnie for backing Mandela in apartheid era IN era of discrimination in nation 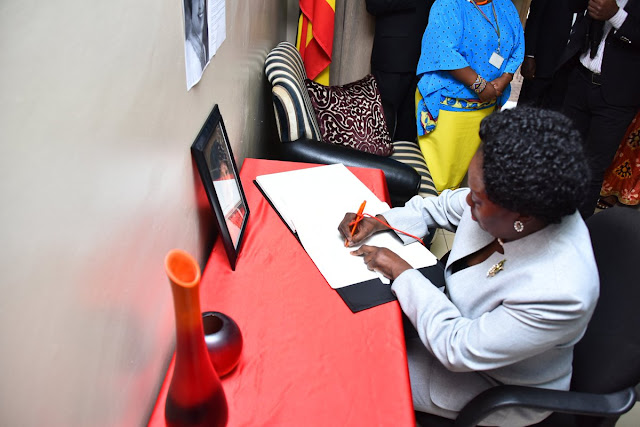 KAMPALA (@UG_EDGE) – Members of Parliament have paid glowing tribute to Winnie Mandela who passed away on 2 April 2018 in Johannesburg South Africa.

During a plenary session on Thursday, 12 April 2018, Minister in Charge of General Duties in the Office of the Prime Minister, Hon Mary Karooro Okurut (NRM, Bushenyi) moved a motion for a resolution of parliament to pay tribute to the late anti-apartheid campaigner and former first lady South Africa.

Close to 40 MPs who paid tribute to Winnie Mandela, commended her role and dedicated service in the fight for justice and equality in South Africa, especially at a time when Africa sought to get on its own feet, away from the colonialists.

“You cannot talk about apartheid without mentioning Madiba and Winnie Mandela. She was a true inspiration, defending her husband against all odds as well as the youth,” said Hon. Jovah Kamateeka (NRM, Mitooma).

Rukungiri Municipality MP, Hon. Roland Mugume who seconded the motion, noted that Winnie Mandela had proved to the world that activism with a purpose was a key to securing people who faced political bondage and oppression.

“It is this lady that faced physical reality and state confrontation head-on. She was never limited by physical strength, emotional targeting and social injustices,” noted Hon. Mugume.

Hon. Monicah Amdong (NRM, Kumi) observed that Winnie Mandela’s legacy should be used to emphasize the need to increase women’s participation and representation in decision making processes in a bid to build their capacity.

The Speaker of Parliament Rebecca Kadaga also noted the zeal and strength with which Winnie Mandela was able to raise her family and engage as freedom fighter, albeit Nelson Mandela’s imprisonment for 20 years.

“Honourable members, let us acknowledge that despite the harassment, imprisonment and torture, she was still able to raise her children and send them to school,” said Kadaga.

Earlier in the day, the Speaker, accompanied by members of Parliament visited the South African High Commission in Kampala and signed a condolence book in her honour. —— AUTO – GENERATED; Published (Halifax Canada Time AST) on: April 13, 2018 at 04:21PM

« UGANDA: South Sudan national goes missing in Jinja (Previous News)
(Next News) UGANDA: Whiteman asks Janet Museveni to give up her seat to a young lady just for a day »