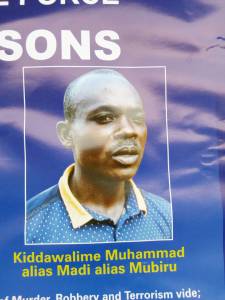 KAMPALA (@UG_EDGE) – Notorious robber Muhammad Kiddawalime has finally met his end at the wrath of angry residents in Kalungu residents.

Assistant Inspector General of Police Asan Kasingye, the Chief Political Commissar, confirmed the report saying the deceased was with Musa Galiwango, who recently escaped from the chief magistrate’s court in Masaka.

“Yes, I can confirm Kiddawalime was killed in a robbery in Mukoko, Bukulula, Kalungu district,” Kasingye said in a tweet.

“Apparently, he was with Musa Galiwango who took off. We are pursuing him.”

The duo had drilled a hole into Resty Nakyambadde’s house at around 3:49am.

Kasingye said the two escaped from Prison officers at Masaka court. They were accused of murder in Bukomansimbi.

Police had promised to give Shs10m to anyone who would give the whereabouts of these suspects. AUTO – GENERATED; Published (Halifax Canada Time AST) on: April 10, 2018 at 05:31PM

« TRUMP: Lawyer raid is an attack on America??? (Previous News)