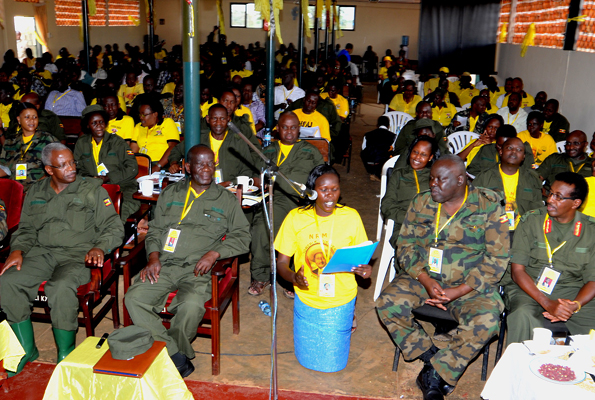 KAMPALA (THE OBSERVER) – Her determined push to rescue the struggling Uganda Telecom Limited (UTL) from fiscal crisis has drawn mixed reactions; praise from supporters and accusations of bribery from opponents.

State Minister for Investment and Privatisation Evelyn Anite is said to be under police investigation for allegedly soliciting a $8 million (Shs 28.8bn) bribe from a group of Arab investors.

But in an April 26 interview, the minister tried to take the sting out of the damaging allegation. She told The Observer that her accusers are essentially jealous of her. Asked about the bribe, she laughed.

“… you know, my job is an envious job, there are many people who want to have it. So, you would expect them to say anything,” she said.

Anite said she has alerted President Museveni about the rumours.

“When I first heard about this particular issue, I went straight to my president and I had to tell him. I told him that word making rounds is that because of UTL; I am going to get $8m just because I am fighting to save the company from liquidation. This issue is going to go before cabinet, we will discuss it, and we will choose; should the company be liquidated or not,” she said, adding, “I expect to hear those accusations because I am stepping on people’s feet. When I tell you that I am going ahead, negotiating big projects, and standing in the way of those who would want a bribe, you expect them to smile and clap their hands for me? Of course not.”

She said her job entails interacting with investors everyday “but when someone says that you took $8m from investors…really? $8m…just think about it. Where would someone put such money? I am one person who can go to the last mile without getting anything, without any financial gain or incentive. I have been very consistent and when I start on something, I don’t let go.”

On Thursday, the director of the Criminal Investigations Directorate, Grace Akullo, said she is not aware of any investigation involving Anite and the alleged bribe.

“I haven’t seen that file. And there’s no way the president can order an investigation of such a high-profile person like Anite without me knowing,” she said.

She added, however, that the president could have gone through her superior, the Inspector General of Police Martin Okoth Ochola.

A 2015 audit of UTL reported that the company was on the verge of collapse with a Shs 366 billion liability, outstripping its total asset base of Shs 220 billion.

Earlier in January, Museveni stopped government from recovering more than Shs 200 billion from UTL and instead directed that the debts be converted into shares.

UGANDA: Woman in Bududa gets kidnapped and her hings sliced off, tossed at her house – Matsima baduda babina these days!