UGANDA: Lwanga complains of regime using other priests to spy on Bishops 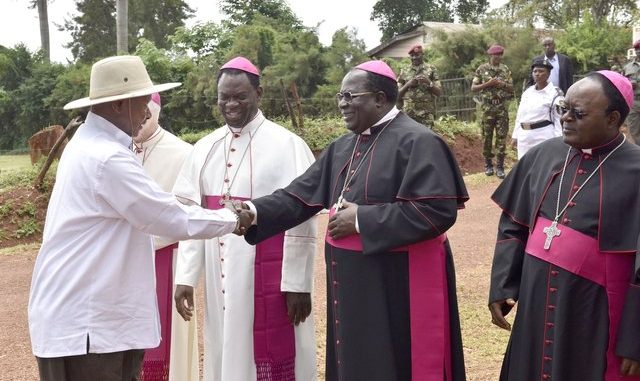 I do not care much for Uganda religious leaders at all. I remember them all being mute during the grossest injustices in the country under this same regime.

You can start with the Kasese massacre as an example. ONE DAY THEY WILL COME FOR YOU TOO.

UGANDA: In response to Bishop Lwanga’s comments that NRM thugs have recruited other priests to spy on him et al, I would like to remind you that this is the 6th time I am pointing this issue of security to you.

If you remember well, there is nothing going on under MUSEVENISM which our blog has not warned you about. Pay attention.

Having started his political career as an intelligence officer and more especially in a communist background and setting, Uganda’s military dictator, Museveni values the flow of information on all aspects of public affairs right from the smallest unit at village level to the top at national level.  All his decisions and policies are based on the information generated in such a way. During the Heros Day celebrations in Busoga in 2013, he asserted that he is aware of everything that happens in Uganda. In order of priority, here below are the different structures and sources through which Museveni gets to know all that is happening in the country pertaining to political, economic, social aspects.

(c)  Police-  the police is spread throughout the country.  At every police unit/station/post there is a department Crime Investigations and Intelligence (CIID.  Traditionally, it was only Criminal Investigation Department (CID) but Museveni disbanded the intelligence branch of the police (SB) and gave the extra task of intelligence gathering to CID making CIID.  The police officers in charge of CIID help their commanders to gather intelligence of crime, political, economical and social nature.  This information flows from the remotest police post, to the zones, District, Regional, the police headquarters (IGP) who feeds the Museveni.

(d)  State House Intelligence –  this is an informal intelligence outfit that Museveni personally manages.  It has a wide network and well facilitated both financially and logistically.  It collects intelligence and inquires into any matter in any government sector.

(e)   Army officers under NAADS – under the cover of fighting poverty, Museveni deployed army officers into the agricultural sector under the National Agriculture Advisory Services (NAADS).  The purpose was to widen his intelligence gathering networks.  These army officers who are spread among the population throughout the country gather intelligence of military, political, economic and social aspect. Their reporting structures are Sub-county, District, zones, region, up to the national level to Museveni’s brother, Gen. Saleh who in turn reports to Museveni.

(f)  Very soon he will have another intelligence outfit crafted out of his close religious allies – the Born Again Christians.

All the above outfits gather, compile, make recommendations and submit reports inform of Special Reports, daily Situation Reports, monthly reports, quarterly reports, mid-year reports, annual reports to the sole consumer who is Museveni.  Actually the release of monthly operational funds by the headquarters of the respective organisation is conditioned on submission of these reports.  On the contrary, failure to submit such reports calls for serious reprimand including withholding of funding.  Intelligence gathering and reporting is heightened during the electioneering period where Museveni is briefed on every aspect before he goes for campaigns in any a given area.  The formal of such intelligence reports touches of:

(a) Local Council (LC) I at the village, L.C II at the Parish, LC III at the Sun-county,  and L.C V at the district all gather, compile and submit information in form of reports bottom-top up to the minister of Local Government who reports to Museveni.

(b) Resident District Commissioners –  are the supervisors of all government programs in the district and get reports from all the sectors in the district and fuse them into one report which is submitted to the Minister In-charge of the presidency who in turn reports either directly to Museveni or through the Prime Minister.

(c)  Chief Administrative Officers (CAO) –  they supervise the different departments of the civil service under that particular district. The heads of different government departments at district level compile reports which they submit to the CAO who in turn also submits to the Minister of Public Service who also submits to the Prime Ministeror and then Museveni.  But even the different heads of departments at district submit reports to their regional heads who in turn submit to their line Ministers and then to the Prime Minister who finally submits to Museveni.

With the above functioning structures that gather, compile and submit periodic reports on every aspect government operations at every level and from every corner of the country, Museveni is fully aware of the whole situation pertaining to service delivery and by feigning ignorance,Museveni is just playing on the intelligence of Ugandans.