Anger in Uganda over a rise in kidnappings – Reuters TV

Public anger is increasing in Uganda over a rise in kidnappings, with the police accused of serving the interests of President Yoweri Museveni over solving crimes.

LUWERO, Uganda (Reuters) – In a small Ugandan town in February, Juma Nsereko took a panicked call from his wife: their five-year-old twin girls were missing and the mother suspected their neighbour, a jobless man, had kidnapped them.

After a frantic three-day search the children were recovered unharmed and the neighbour, who had demanded a ransom of 13 million Ugandan shillings (£2,449), was arrested.

Until recently, such kidnappings were rare in the nation of 41 million people. Although still low compared with some other African countries like oil-rich Nigeria, numbers have risen markedly in the last three years.

They jumped again in the first two months of this year, according to unpublished police data seen by Reuters, further eroding people’s faith in a police force that opponents of President Yoweri Museveni have accused of serving him and not the state.

In January, Museveni, who has ruled Uganda for 31 years, signed a law that scraps an age cap, enabling him to stand for re-election in 2021.

The 73-year-old leader’s ability to push the law through parliament illustrates his strong grip on power, analysts said, despite increased public anger over corruption and poor social services.

Even in Nsereko’s case, which ended happily, police emerged with their reputation tarnished – the family credited the extensive coverage of their plight on television for the safe return of the children, not law enforcement agencies.

“The police were so angry with me that I was complaining to the media about my frustrations with them, but it was media that got me back my kids,” Nsereko told Reuters in Luwero.

Police spokesman Emirian Kayima denied police were not doing their job and said criminals were exploiting technology such as unregistered SIM cards to conduct kidnappings.

“We do the best we can and we keep improving but crime keeps changing shape and colour and somehow it slips (through),” he said. 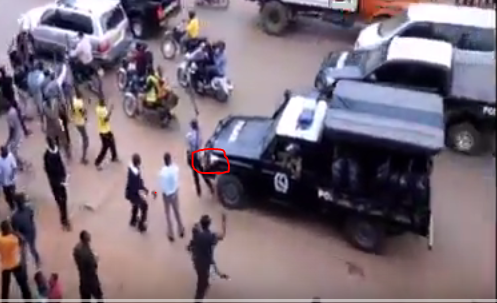 Opposition and media criticism of police tactics has intensified in recent years, as Museveni’s ruling NRM party has sought to push through constitutional changes that will allow him to extend his three decades in power.

“The police’s priority is to see the junta stay in power. Their priority is not protecting people,” said shadow interior minister Ingrid Turinawe of the opposition Forum for Democratic Change led by Kizza Besigye.

Besigye’s movements have regularly been impeded by trucks of heavily armed officers. Two people were killed in October when police fired live rounds and teargas to break up one of his rallies.

In November, 2016, security forces killed more than 100 people in an assault on the home of a tribal leader suspected of promoting a secessionist movement in a known pro-Besigye region.

“We don’t mix politics with security. They (the opposition) are playing politics.”

Independent newspaper the Daily Monitor accused the police of failing in their fundamental duties.

“The state security agencies cannot escape accusations of having abdicated their cardinal duties of protecting the lives of citizens,” it said in a March editorial, after the discovery of two dead kidnap victims.

SCARCE STATISTICSTracking the level of kidnappings, and crime more generally, is not easy in Uganda.

The government last published annual crime statistics in 2013, but data seen by Reuters from the Flying Squad, an elite police unit, shows an upward trend in kidnappings.

In January and February, the unit recorded eight kidnappings, compared with 24 in the whole of 2017 and three in 2014.

According to a statistics agency report from last year, which sourced its data to the police, there were nearly 4,500 murders in 2015, the last year for which those figures were available. But that was already nearly double levels in 2013.

Livingstone Sewanyana, head of the Foundation for Human Rights Initiative in Kampala, said it was no coincidence the government was trying to suppress damaging crime data, given Museveni’s push to stay on as president.

“Of course the state would not be interested in exposing its weaknesses by reporting that there’s a major explosion of crime,” he said. “It’s a worrying trend.”

Police deputy spokesman Onyango said police were not prepared to share homicide data publicly and did not want to comment on data from the statistics agency.

TV RESCUEMuseveni, a former guerrilla fighter backed by the West as a pillar of stability in the turbulent Great Lakes area, last month sacked his security minister and the chief of police.

He gave no reason for the decision, communicated via Twitter, although local media had reported a feud between the two outgoing officials. Some analysts said the move was more likely to be linked to public criticism of the police’s performance.

Whether the change of personnel changes anything remains to be seen, but for now the police are in the public dock.

Nsereko’s harrowing experience, played out in the full glare of the media, painted the police in a less-than-flattering light.

When he reported his twins missing to the local police station, officers asked for money for fuel for their cars. He said he gave them 490,000 shillings ($133), all that he, a motorcyle repair man, could afford.

Onyango said police were not aware of Nsereko’s accusations.

“Our services are free,” he said. “If it’s true that there’s an officer who asked for money or fuel from a client who had reported a case of kidnap, it will be investigated and he will appear in our disciplinary committee.”

After two days and multiple phone calls from his neighbour demanding a ransom, police had not found Nsereko’s children. They were eventually rescued in part because of a television news report.

A hotel manager in a nearby town grew concerned when two children staying there with a man pointed at the television in the lobby and said that the woman on the screen crying and speaking about a kidnapping was their mother.

The proprietor told guards to keep watch over the man while he called the police, who took him into custody.