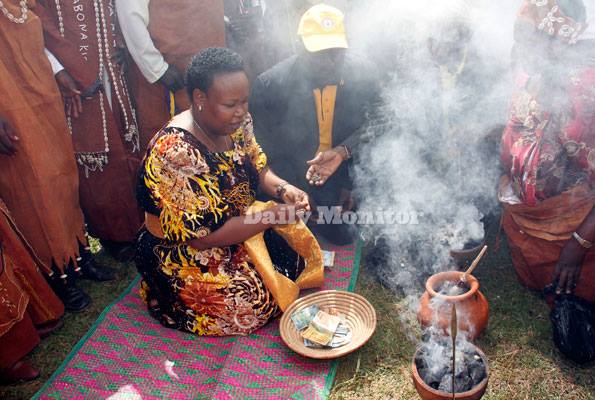 Why the #Museveni regime promotes superstition and fake pastors – #Uganda

When Museveni came to power 31 years ago, he came with the Marxist ideology which views organized religion as divisive and exploitative to the masses. He also viewed the Catholic and Protestant churches as historical strongholds of the traditional political parties, DP and UPC respectively. He had a mission of asserting his authority and destroying these traditional political parties. He has, for the last 31 years been promoting the Pentecostal/Born Again churches which have greatly weakened the Catholic and Protestant churches. Through his wife who claims to be a Born Again, he has sided with the Pentecostal churches where his daughter also runs one such church.

Museveni has always promoted his policy of reigning over an ignorant, disease-prone, and impoverished Ugandan society. Over the years, he has succeeded in destroying the once flourishing Uganda’s education standard. He has directly helped the institution of the so called Traditional Healers to flourish. His deliberate haphazard economic policies have impoverished Ugandans to unprecedented levels. Consequently, with biting poverty and a defective health care system, traditional healers/Witch Doctors and Pentecostal churches have come in to fill the gap. Desperate Ugandans turn to Witch Doctors and fake Pastors for solace. They have fallen prey to quack Doctors and Prophets/Pastors where they don’t only lose their hard-earned money and property but are also lured into commission of heinous crime.

Because of unemployment, many Ugandans spend most of their time in these Born-Again churches praying for divine intervention. Unscrupulous Pastors and prophets exploit their vulnerability by claiming to pray for them to get Visas, cars, and property. They claim to cure both the curable and incurable diseases. Interestingly, they craftily promote superstition through emphasising widespread existence of witchcraft/evil spirits which they in turn claim to cure through prayers.

The wealthy, the educated and the illiterate have equally fallen victim. There is a strong belief that ritual sacrifices of human beings, more especially children brings about social, political and economic success. Sometime back the Head of the Police’s Anti-Human Trafficking Task Force, Moses Binoga, confirmed that politicians and wealthy businessmen secretly visit shrines. Sometime back, Museveni and Speaker Kadaga set the example by visiting shrines in Mubende and Busoga respectively. It is an open secret that Ugandans in South Africa dominate the institution of Sangoma, traditional healers. In September 2006, the government of South Africa announced a plan to deport the dominant Ugandan quack witch doctors. Because of their role in the economy, Uganda’s police chief, Gen. Kalekyezi met the Association of Traditional Healers in Uganda to discuss the impending deportation.

It is speculated that most of the Ugandan celebrities, more especially in the Music industry, carry out sacrificing of their siblings, spouses and children in return for success. There is also the phenomenon of regime cohorts abruptly accumulating ill-gotten wealth by fleecing public money but deceive gullible Ugandans that it’s acquired from the practice of witchcraft. In January 2006 Uganda’s foreign service was hit by allegations of witchcraft just because almost 80% of them are not career diplomats. Sometime back, artificial gadgets that cause electric shock to unsuspecting Born Again churchgoers were seized at Entebbe Airport as they were being imported. Because of the hidden agenda, the regime has never come out clear to tackle the problem. Instead leading traditional healers/witch doctors and fake pastors are accorded VIP protection and high level facilitation. Museveni accords the same or even better status to the head of witch doctors, Mama Fina as to the head of the Anglican and Catholic churches in Uganda.

Around February 2017, as Museveni was attending night prayers at Rubaga Miracle Centre, Pastor Kayanja warned him that State House was beset by witchcraft. He said; “Your Excellency, witchcraft is everywhere, in Parliament and in State House…… in the past 150 days, I have realised that the majority of people who have brought witchcraft are not pagans.” In reaction, Museveni informed the congregation that Pastor Kayanja had accurately analysed the issue of witchcraft. He further castigated Born Again Christians for promoting sectarianism in the country by condemning other religions especially traditionalists, who believe in witchcraft. He said; ” What Kayanja has said is very true. These Catholicism, Protestantism and Muslims …. they are there, but also the traditional religions are there, and it is very strong and it is everywhere. Many people go to church during the day and in the evening, they go to traditional religions. I saw this, but for me I mobilise all of them for peace, but you can sort out the rest later.” He went ahead to plainly show his support for traditional healers thus; “…. some people ask why I deal with them. You know what Jesus says; that I did not come for the healthy but for the sick.” Shortly after, his Press Secretary, Tamale Mirundi, appearing on a local FM radio station, Top Radio, confirmed that the existence of witchcraft practices at State House. He said; “…. for 13 years, I worked at State House, I saw a lot. There are a few saved people there. Majority believe in African tradition.”

It is against the above background that last week the Minister of Internal Affairs told Parliament that the ongoing mysterious killing of women in Uganda is linked to the devilish worship, Illuminati. No wonder, during the same week the regime facilitated Prophet Elvis Mbonye’s grand Dinner Gala where his followers were made to kiss and lick his shoes. With flourishing ignorance, disease and poverty under the reign of Museveni, Ugandans should anticipate the worst. After Museveni, will have attained his life presidency, Ugandans will be required to worship him as a demi-god, Mucweezi.  INFORMATION IS POWER AND DEFIANCE IS THE WAY TO GO.

BY Karoli Ssemogerere, DAILY MONITOR Published on May 24, 2018The Lake Victoria region is in the middle of a fresh wave of kidnapping, human sacrifice, and genital mutilation. Randomly, young women and children are kidnapped at all hours. In some cases, kidnappers request for ransom although in many instances, its ransom for where to deliver the body. Few of the kidnappers have the capacity to move or incarcerate a person incognito for more than a few days. In other cases, the violence occurs immediately – bodies are hacked, mutilated or even sexually abused – and dumped in the bush for passersby! There are also other cases where the body is driven around and dumped on the periphery of populated areas.

Children, girls, and boys are another major target. Three years ago, domestic help was part of the problem; domestic maids entrusted with children would turn on them and deliver infants, toddlers to gangs, who in turn would request for huge ransoms from their parents. There were also other instances where children would be pummelled by the domestic help. Then the bigger gangs have formed to carve body parts from the children.

The third wave are hardcore criminals who invade villages pillaging life and property as if they were bought from shops. These criminals, in the words of an MP from central Uganda, Sarah Temulanda before a hushed parliamentary committee earlier this month, deserve to be “executed” rather than tried in the courts. These gangs drop off leaflets identifying bounty to be collected. A smaller group of these hardcore criminals have concentrated on more gory crimes, practicing human cannibalism, an abhorred practice nearly stamped out in the last century. In one village in Rakai District in the southwest lake region, a family was found with human bones stored in tins.

This state of affairs has baffled law enforcement, which temporarily appears to stall the problem before it breaks out. Numerous barazas have been held by police calling upon citizens to speak out on these horrendous atrocities. The President has been one of those holding barazas – he held one in the Entebbe sub-region where more than 40 women lost their lives last year. His former Inspector General of Police Kale Kayihura did the same with the same results.

In this deadly wave, a few other aspects of life in society have cropped up. First is the open practice of witchcraft. Sorcerers have gone mainstream, including divining on public radios, prompting the communications regulator, UCC, to ban a number of programmes where actual radio producers go to sleep living the traditional medicinemen and women to vend their wares through hours’ long infomercials. In many villages in the central district, the village witchdoctor or healer is a place of prominence. His or her guests in search of riches, good fortune or sometimes stroke of luck to bear a child, may arrive anonymously or openly with open offerings to pray for whatever it is.

In other cases, desperate a situation common in HIV, mental health or other terminal cases, patients arrive for “treatment”, at which they will be asked for all sorts of offerings so as to be healed of their ailments. Patients are kept in expansive secretive compounds. Superstition long common in the lake peoples to explain all sorts of bad omen, famine, drought, plagues has fuelled demand for these traditional doctors (basawo).

The rise in hard times across society has promoted this pluralism, which allows the population to split their bets between the mushrooming outlets of retail evangelism, the traditional mainstream churches squeezed in the middle with falling attendances and the dark third world.

The mainstreaming of these horrendous practices are in effect a negative evolution of society responding to capitalism, poverty and distress. While the police and government community outreach is justified showing up at funerals, we must accept that it is a failure of values. In fact, we should be preaching to the well-dressed men and women filling the pews on Sundays.
Mr Ssemogerere is an Attorney-at-Law and an Advocate. kssemoge@gmail.com

COMMENTS:
This human sacrifice that is extinguishing Ugandans cannot be defeated by our political leaders who are members of the cults and brotherhoods everywhere in this country.

If our leaders were not guilty for devil worship, with all the kind of military intelligence we have in every village, this evil would substantially be eliminated.

Secondly, we need a leader who can closedown all fake pastors, having sex with all beautiful women in their slaughter makeshift called churches, undressing women, kissing people’s wives, doing trial pregnancy, inserting the Holy spirit from the private parts of a lady, these are evils a good leader cannot tolerate. The reason I respect President Paul of Rwanda.

For the Musicians who I hear go under waters in order to shine in music, the result is clear, without the evil powers, they would not be wealthy and famous. Time will come to reveal all this…

Am sure God of the Universe is taking note of all these horrendous occurrences destroying our beautiful country. He will change leadership and management of the country soon and things will get better.

I hate witches and proclaim heavenly fire on them in Jesus Mighty name…
======
God would hear the reports about Sodom and Gomorrah. One day, he wanted to prove it himself. He sent angels(
Maybe he came in human form) to witness things for himself! What he saw was utterly disgusting! Men of Sodom and Gomorrah wanted to have gay sex with those angels of God in Lot’s house! The angels told Lot to escape with his family because it was finally time to destroy Sodom and Gomorrah. Lot was instructed to run for his life and never to look back. God surely destroyed Sodom and Gomorrah with fire and no one survived. Time will come for this government to be destroyed in similar way. We will not get tired to pray.
=====

That is very encouraging Sally..the fall of Museveni’s brutality and witchcraft is just strides away.